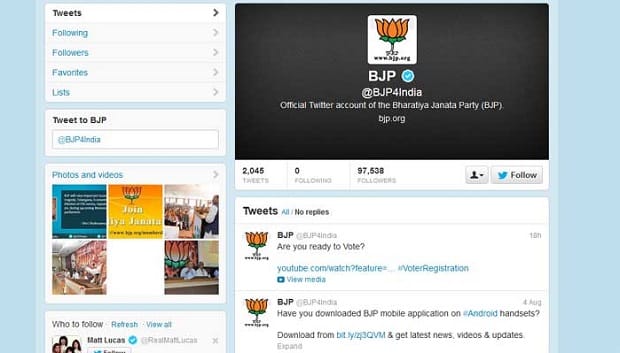 Social media, especially Twitter, is becoming the vehicle of information dissemination of the new Indian government – beginning with Prime Minister Narendra Modi himself, who has two Twitter handles that are a constant source of information .

Modi, one of the most tech savvy of politicians, made the Bharatiya Janata Party tech savvy much before the party came to power. He is now doing the same with the government, pushing the use of social media for information dissemination.

When Modi formed government on March 26, nearly 90 percent of his ministry was already on social networking. The prime minister made it clear that social media was set to be the medium to take their word instantly to the people.

BJP ministers are now using their own twitter handles and Facebook pages as well as the official twitter handle of Press Information Bureau (PIB) to communicate with the people.

The connecting with people does not end there. The government is also studying the impact of the tweets and social media trends.

According to official sources, a report is to be compiled every day on the trends on Twitter and other social networking sites. The report is to be submitted to the Prime Minister’s Officer (PMO), home ministry and other ministries.

“Since social networking is being used in a big way, its impact assessment is also necessary. So far some ministries have been doing this at a small level for individual topics. We will soon have a proper mechanism for such kind of assessment,” a government official told IANS, requesting anonymity.

Among the ministries that have already undertaken impact assessment of social media are the information and broadcasting ministry and external affairs ministry.

Social networking played a major role in the election for the BJP, led by Modi himself. Modi, who was then Gujarat chief minister, had a blog, Facebook page and Twitter handle which relayed his speeches, programmes, and comments.

In fact, Modi is the first Indian leader to address public gatherings through virtual 3D rallies.

“This government is different from the previous one in which few ministers were on Twitter, and that too attracted controversy. This is not just the first time that social media is being used on a massive scale by the government, but it is set to create a precedence,” an official from the information and broadcasting ministry, who did not want to be named, told IANS.

“Most ministers already have Twitter handles and Facebook pages. Those who are not proactive use the official PIB handle to communicate,” the official added.

Women and Child Development Minister Maneka Gandhi is among those who recently joined Facebook. Nirmala Sitharaman has opened a new Twitter handle as commerce minister for official tweets.