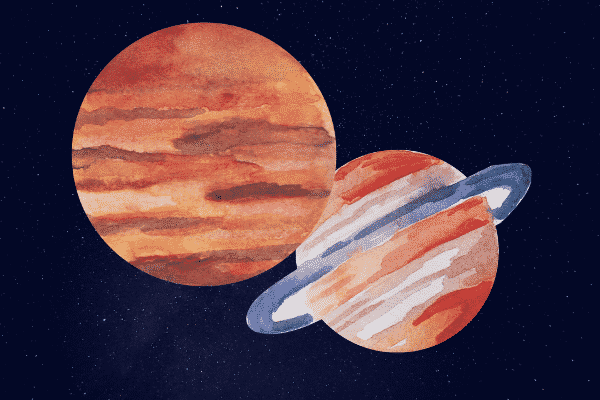 An awesome celestial treat awaits stargazers as two of our solar system’s largest planets, Jupiter and Saturn, will look like a double planet just after sunset on the evening of December 21, the beginning of the summer solstice in Australia.

This is the first time the two gas giants will appear this close to each other in nearly 800 years.

“Alignments between these two planets are rather rare, occurring once every 20 years or so, but this conjunction is exceptionally rare because of how close the planets will appear to one another,” Patrick Hartigan, Professor of Physics and Astronomy at Rice University in Houston, Texas, said in a statement.

“You’d have to go all the way back to just before dawn on March 4, 1226, to see a closer alignment between these objects visible in the night sky.”

The space party started with the Geminid meteor shower on Sunday night and early into Monday morning, a Canberra Times report said. The Geminid is an annual meteor shower which occurs when the Earth passes through the tail end of the 3200 Phaethon asteroid encountering bits of rocks (shooting stars).

Although Jupiter and Saturn have been approaching one another in Earth’s sky since the summer, the two will be separated by less than the diameter of a full moon from December 16-25.

“On the evening of closest approach on December 21, they will look like a double planet, separated by only 1/5th the diameter of the full moon,” said Hartigan.

“For most telescope viewers, each planet and several of their largest moons will be visible in the same field of view that evening.”

Though the best viewing conditions will be near the equator, but the event will be observable anywhere on Earth, if the weather permits.

Those who prefer to wait and see Jupiter and Saturn this close together and higher in the night sky will need to stick around until March 15, 2080, Hartigan said.

After that, the two planets would not make such an appearance until sometime after the year 2400.

Can your mobile phone get a virus?