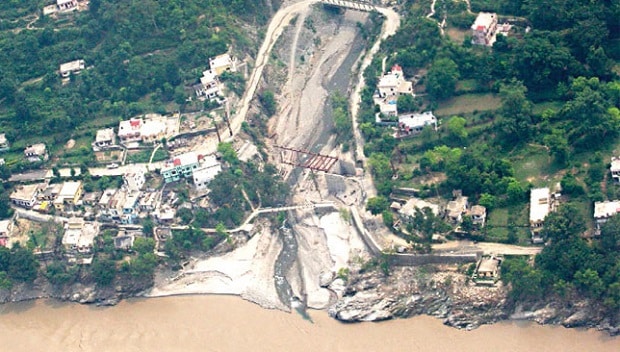 Uttarakhand is yet to recover from the massive rain-triggered floods that left thousands dead last year and exposed the gaps in disaster management strategies. Now Indian scientists have devised sophisticated satellite-based and computer-centric technologies to map potential natural hazards to aid in disaster mitigation.

Geoinformatic tools (the application of technology to geographical sciences), such as remote sensing (RS) and geographic information system (GIS), were successfully put to use by researchers at the Jadavpur University’s School of Oceanography to scientifically analyse and prepare zonation maps of Bihar.

The procedure, which can be extended to the entire country, was used to map earthquakes, floods and droughts and an emerging environmental phenomenon – urban heat islands.

“This study reveals the actual zonation of different natural hazards on the basis of which the policy makers can formulate future plans. It can be a pathway for making such efforts for every individual state and then compiled together as a country report, said Tuhin Ghosh, joint director of Jadavpur University’s School of Oceanographic Studies. “It can be charted for various climate zones too,” he added.

The report, titled ‘Natural Hazard Zonation of Bihar (India) Using Geoinformatics: A Schematic Approach’, can be read in Springer’s Briefs in the Earth Sciences’ series of publications.

Though previous attempts were made for similar studies, Ghosh contended the report compiled by him and researcher Anirban Mukopadhyay is the first to put all the data – of intensity and distribution of hazards – on a common platform, that is, GIS.

GIS is a computer system that integrates, stores and analyses geographical data for informed decision-making, while remote sensing, with the help of open source (freely available) satellite data and sensors, can help one identify, locate and measure objects without coming in direct contact with them. In addition, these systems save time, are cost-effective and need less human resources when compared to physical surveys for big areas, for example, while developing state-wide reports, said Ghosh.

Lauding the project, environmentalist P. K. Joshi, who has expertise in RS and GIS, said the information gleaned from a blend of such zonation data, with inputs from governmental agencies (like the Indian Meteorological Department) and non-governmental agencies can be conveyed directly to the people through cell phones that are nowadays geoinformatics-enabled.

Though geoinformatics encompass all the analysis done by IMD, there is a definite edge in mapping hazards, Joshi said. “It can help in retrieval and integration of many more biophysical parameters and provide more robust geo-statistical analysis. “Integration of other socio-economic data sets is much easier and powerful in a GIS environment which can directly feed the policy and decision makers,” Joshi, head and professor, Department of Natural Resources at New Delhi’s The Energy and Resources Institute (TERI) University, told IANS via email. “It could guide in rescue efforts in disasters of huge proportions, like Uttarakhand,” he added.

In addition, GIS is a “handy tool” for administrators to comprehend the spatial dimension of hazards, according to Chandan Ghosh, professor and head, Geo Hazards, at New Delhi’s National Institute of Disaster Management (NIDM).

And if these maps, in scaled-down and detailed versions, are made available to district administrators, they can facilitate easy identification of roads and landmarks while planning for rescue operations, Chandan Ghosh reckoned.

“From such studies, what is needed the most is the preparation of ‘live inundation map’ or ‘computer animation of virtual flood situation using rainfall and water flowing from adjoining water bodies’,” Chandan Ghosh told IANS via email, adding it could enable officials to visualise a near-real situation of floods and help in marking danger and safe zones.

At the heart of the matter and for large-scale policy making, there is a pressing need for a change in mindsets and accepting and adopting new vistas for efficient disaster management.

“Continuous study, analysis, formulation and updating of hazard zonation can maximise the preparedness strategy and minimise the cost and effort therein. Also, awareness and capacity-building regarding potential natural hazards in every level of stakeholder in the governance, society and industry are important,” said Tuhin Ghosh.