Hair could hold the key…. 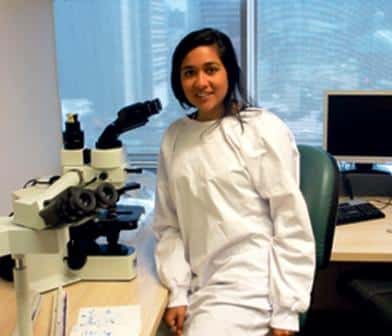 A lock of hair could quite literally hold the key! A significant discovery by Indian origin researcher Dharmica Mistry has led to a novel approach in the war against breast cancer.

Affecting women of all ages, the dreaded killer is the second most common cause of cancer-related deaths among women, with one in eleven at risk of developing the disease.

Currently doctors use what is known as the “triple test” to identify potential breast cancer patients. Based on family history, it could typically include physical examination, mammogram, ultrasound or MRI and biopsy.

In the future, Mistry’s exciting new findings could well provide a safe and viable alternative to these painful tests – one that is suitable for women of all ages.

The PhD student at Macquarie University’s Australian School of Advanced Medicine has identified that women with breast cancer have higher levels of phospholipids (fat derivatives) in their bloodstream that can be detected in their hair.

“The theory behind this biology,” Dharmica told Indian Link, “is that the cancer secretes lipids into the bloodstream which are taken up by the hair follicle and incorporated into the patient’s hair. Lipids are found in hair cell membranes as well as on the exterior of the hair shaft (a result of sebum and hair products).”

According to Mistry, the particular lipids of interest are the internal ones. “Even though lipids are found in hair cells, what we are looking for is an increase in breast cancer-associated lipids,” she clarified.

Although the correlation between breast cancer and change in hair structure was first noted by Veronica James in 1999, Mistry has finally identified the actual molecules that cause this change.

“Initially we assumed it was a protein change in the hair that is associated with breast cancer,” she stated. “However in 2009, we discovered that it was actually a lipid that was giving rise to the changed x-ray diffraction pattern.”

This discovery, in fact, was quite accidental. Naturally inquisitive, Mistry analysed samples of her own hair to find telltale rings quite similar to diseased ones, even though she is cancer-free.

“It all came to light from using my hair as a normal control for the x-ray diffraction studies. My hair exhibited the change we see in a cancer patient’s hair, and I had been using olive oil as a conditioner. Olive oil is a lipid, and when I stopped applying it to my hair, the pattern reverted to a normal one,” she explained.

“This triggered further investigation and we were able to convincingly demonstrate that one or more lipids were responsible for the breast cancer feature in the diffraction pattern,” continued Mistry.

Based on her hypothesis, a group of researchers have now developed a test to identify altered cell structures in women with breast cancer.

“To develop a screening test for breast cancer, we cut a sample of the patient’s hair, close to the scalp, and extract the lipids from the hair. We then use a technique called mass spectrometry to analyse the samples,” she explained.

Supervised by Macquarie University’s Dr Peter French and Professor Mark Connor, the work is being funded by SBC Research Limited, a private company set up in 2010 to explore the use of both x-ray diffraction and mass spectrometry of hair to eventually develop the test for breast cancer.

Mistry, who has been researching this specific area since 2008, believes that the technology could definitely be used as a supplement to mammography and has the potential to replace mammography, if ascertaining the specific lipids involved increased the accuracy.

SBC is currently in the midst of a clinical trial to firstly, identify the lipids involved and then to determine the accuracy of a test based on those lipids.

“To this end, we have been collecting hair from clinics in Sydney and have been using the mass spectrometry facilities of Metabolomics Australia in Melbourne,” said Mistry.

Currently her team is also working on finding the association between the tumour stage and the level of lipid found in hair.

As yet, commercialisation is still a couple of years away, she admitted. “We still need to conduct extensive studies to confirm the accuracy of using this technology to detect breast cancer. However, if we are successful, the potential is enormous”.

The current standard screening system (mammography) is not routinely available for women under the age of 50 for a range of reasons.  “However, once we have developed a sensitive, specific and non-invasive test using hair, it is possible that this will become a universal screening test for women of all ages,” she added hopefully.

Human biology and all its diverse aspects, particularly the way the brain functions, fascinate the young researcher. “It is extremely compelling and constantly challenging,” says the UK born Mistry who has a degree in Microbiology. “In all honesty, I wasn’t sure what research was about until my fourth year at Sydney University,” she admitted candidly.

“Studying strange bacteria that live in eucalypt trees, I found they could infect humans too. I learnt so much that year and found that real science is all about thinking outside the square and pushing the boundaries – and all that is possible in research”.

A positive outcome of SBC’s clinical trials could provide a highly sensitive and painless test for breast cancer, with the potential to significantly reduce the probability of death.