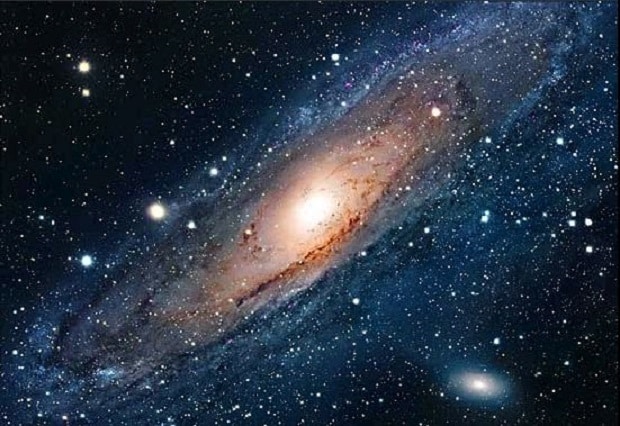 Recent reports in scientific journals announced the banishment of the hitherto held Big Bang Theory about the origin of our universe, making way for the Rainbow Theory. The age of our universe is not 13.7 billion years as we were previously informed; apparently it has been in existence from times immemorial.

How old is the universe? How did it begin? Scientists have pondered over such questions for a long time. The term ‘universe’ here includes not just our solar system, but all possible solar systems, planets and stars – in short, everything that exists.

Einstein and his Theory of Relativity

The impetus to discover answers to such questions came as a consequence of Albert Einstein’s theories of relativity. Presenting the Special Theory of Relativity in 1905, he showed that time and space are both relative. This was against the belief scientists held especially after Isaac Newton’s  (1642 – 1727) theory that both these are absolute. What is ten metres for me, is ten metres for everyone; and what are ten seconds for me, are the same for everyone. Einstein showed that this is not so, and everything depends upon the speed of the observer. In 1915, Einstein announced his General Theory of Relativity with a new interpretation of gravity. Newton had held that gravity is a force between two objects. But Einstein said something that startled the world. He claimed that there is a four dimensional Space-Time continuum. We can easily imagine a three-dimensional space consisting of x, y and z coordinates, say east-west, south – north and up and down. To these when time is added it becomes the four dimensional continuum, difficult to imagine but easily expressed in mathematics.  This is like a four dimensional mattress. Einstein said all planets and stars stay on this mattress. The consequence is that the mattress gets wrapped due to their mass. The resulting curvature is gravity. When any foreign body enters this curved space-time, it has no option but to follow a predetermined path.  Einstein said further that the path followed does not depend upon the mass or the energy content of the foreign body. The scientists were awed on hearing this theory, which was a landmark in the history of science. Einstein rose to a level on par with Newton.

The consequences of the theory of relativity have been many, Black Holes and Gravitational Waves to mention a few, but an important consequence is that of the age of the universe. Einstein applied his theory to explain the universe. Unlike his predecessors, Copernicus, Galileo and Newton, he did not limit himself to our solar system. Instead he considered the entire universe. He developed a solution to his equation, but a surprise was in store for him. Einstein’s equation indicated that the universe was contracting day by day. He consulted a few astronomers whose knowledge of Cosmology was as limited as his. They, including Einstein, were of the opinion that our universe was stable.  Einstein concluded that there must have been a mistake in his calculation and invented a Cosmological Constant (no better than a Fudge Factor). When this was inserted into his equation, the universe became stable. That pleased Einstein.  By then he had acquired the stature of a great scientist.  Others simply accepted his view.

A voice was dissent was heard in 1922, from Russian scientist, Alexander Friedmann. He had done independent calculations starting from the theory of relativity.  It was clear that the universe was expanding, and not stable. On hearing this, Einstein remarked that there was a flaw in Friedmann’s work which was accepted by the other scientist. The curtain fell on this debate when Friedmann died prematurely at 37.

Science is a flowing river, never stagnant. Georges Lamaitre, a good Cosmologist and a Belgian priest and scientist came onto the scene. His calculations showed that Einstein was really wrong, the universe is expanding. Now, Einstein too was convinced. Further evidence came in 1931 when he visited the Mount Wilson observatory in California which housed the well-known Hubble Telescope.  He was shown some of the results of viewing of the distant stars. It was clear – the universe was expanding.

It is easy to work out the rest. If one considers the four dimensional space-time continuum, the implication is, that mattress is expanding always like a balloon. The distance between stars and planets is increasing day by day. Just work backwards. Yesterday the distances were smaller, last year they were smaller still. What about a hundred years ago? A million years ago? The universe becomes smaller and smaller as we go back in time. Ultimately a situation is reached when the universe is just a point, a singularity in the language of scientists. Then the density and the temperature of the universe would be infinite. It should have happened 13.7 billion years ago. It is believed that back then, there was an explosion called the Big Bang. As a result, the universe is expanding since that day. Density and temperature have decreased. Planets and stars developed, solar systems came into being, life started. That explosion continues even today.

There have been many reversals in science. A strange fact came out about ten years ago. Scientists were trying to unite theory of relativity and quantum mechanics. Einstein gave an explanation for the photoelectric effect in 1905, for which he was awarded the Nobel Prize. As an outcome of his explanation came the new branch of physics namely, quantum mechanics. This has been very successful in describing the behaviour of subatomic and small particles. Curiously enough, Einstein never believed in quantum mechanics. He held it only as a hypothesis throughout his life.

Uniting relativity with quantum mechanics, scientists discovered that when a foreign particle enters the space-time continuum of any object, the path taken by the particle depends upon its energy content. All particles do not behave identically, as found by Einstein. For example, when white light when enters the continuum its constituent colours may assume different paths thus exhibiting a rainbow, thus it is called the Rainbow Theory.

And its consequences? Adel Awad of the Centre for Theoretical Physics at Zewail City of Science and Technology in Egypt published in October, that there are two possible consequences. Firstly, as we go back in time the universe becomes smaller and smaller, but never shrinks to a point. Secondly, the universe assumes a smaller size as we trace back in time, but after a while retains its size. It plateaus afterwards. In any case, there was no big bang or an explosion. The universe has been in existence for a much longer time than 13.7 billion years. It is eternal and had no beginning.

No theory is sacred or everlasting in science. As new evidence comes in old theories are shelved. We have to wait and see when the Rainbow Theory will be experimentally confirmed.