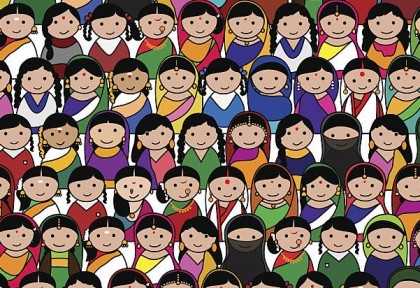 When Yogi Adityanath became the Chief Minister of Uttar Pradesh in India, I tried to look him up on the internet and promptly got a search suggestion from Google: ‘Yogi Adityanath’s caste’.
“Caste?!” I thundered to the empty room. “Why would I be interested in that antiquated system instrumental in oppressing people for millennia?”

Of course, Google suggestions are merely based on a search term’s popularity, so I decided to dig a bit further after my liberal outrage subsided. Turns out, searches for Adityanath’s caste skyrocketed by 3,400% when the news broke. Tech-savvy Indians seem to be tremendously curious about that. Most of the searches came from the Hindi belt – UP, Rajasthan, Bihar, Madhya Pradesh and Chattisgarh.
“So what?” you say. It’s no news that caste plays a stellar role in Indian democracy. There are dozens of openly caste-centric political parties. Caste isn’t abolished in India yet, though caste-based discrimination is. In theory, I might add. According to Justice Markandey Katju, 90% of Indians vote along caste lines.
That’s just how the world’s largest democracy rolls, even if 90% is probably an exaggeration. Totally understandable. The fact that 65% of Indians are aged below 35 years and yet caste continues to be a factor in politics, I concluded, shows that the status quo isn’t going away soon.

Not only is the caste factor still relevant, it is also gaining in strength. Google search data shows that searches relating to caste have nearly tripled – yes, tripled – since 2012. Explosive growth in the internet is helping Indians satisfy their caste curiosity and validate their prejudices.
Telugu cities, Vijayawada, Visakhapatnam and Hyderabad, are the top three cities for caste searches since 2012. Dang! Why does it have to be my home region? But then, not at all surprised. National capital region Delhi, Noida and Gurgaon also made it to the top 10.
Caste searches grew 60% during the fortnight ending 21 August 2016. What caused the spike? The Olympics. While athletes from the world over were lining up to compete for supreme sporting glory, Indians were locating their own kind among the line-ups and searching about their caste.

Searches for PV Sindhu’s caste trended on Google with 10,700% growth when she started winning matches. There was a severe backlash in the media and among the Twitterati. Indian netizens changed their focus and started searching for Sakshi Malik’s caste instead, after she won a surprise bronze medal in wrestling. Were eager parents of eligible bachelors checking out the girls and saying, “I wonder if she’s a good match for Bunty. What is her caste?”
There’s no doubt that caste creates tremendous affinity among Indians. When two new desis are introduced to each other, they try to guess each other’s caste. If it matches, there is a big crack in the ice immediately. Surnames are a big giveaway. (“Neelamraju? Is that Satyam type Raju or the other one?”) They sometimes try to drop a caste reference in casual conversation.

And just like that, relationships for life are formed. The pair is now ready to kill for the other. Literally.
Caste curiosity suddenly explodes when someone makes news. One such top search was “Tina Dabi Caste”. Turns out, Tina was the Civil Services exam topper in 2015 and everyone wanted to know her caste when the results were out. Rinku Rajguru, an actress in the runaway Marathi hit movie Sairaat, also made it to the top table. Other notable mentions are Vijay Sethupathi and Sivakartikeyan, two fast rising ‘heroes’ in Tamil movies. Fan associations are being formed as you are reading this, and most of them have foundations in the actor’s caste.
Surprisingly, not everyone assigns the same meaning to the word ‘caste’.
A Facebook friend shared an outraged post: Inter-caste marriages will spoil the purity and characteristics of Christianity” screamed Bishop Mathew Anikuzhikkattil from Kerala.
“See? See? Caste problems in Christianity!” screamed my Hindu-Nationalist friend.
Closer examination revealed that the Bishop was talking about Christians marrying Muslims and Hindus in Kerala. He meant ‘religion’ when he said ‘caste’. When I got married, I was asked if my parents were OK with the ‘inter-caste marriage’. My wife is from the same ‘Hindu caste’ as me, though she is Maharashtrian. “How is this inter-caste marriage?” I protested. “Aren’t we both [insert caste]?” Turns out, caste meant language/culture in that conversation.

Wikipedia says no one knows what caste really means. Well, that’s what Wikipedia says about most things anyway. Caste has three or four meanings within the Indian context. That confused me further. So what exactly are all these curious cats searching for, then? Tina Dabi’s religion? Rinku Rajguru’s language? Vijay Sethupathi’s Hindu varna? A suitable match for Yogi Adityanath?
A better question would be, why the hell are they searching for it? Million-dollar question.
Lefties like me live in the hope that caste identity is irrelevant in India after independence. If it is still relevant, perhaps the older generations are keeping it alive? Fat chance! Google trends disagree with that, and reveal thriving interest among the presumably younger and more educated population.
A more informed India wants to know more about each other’s caste.
Which then begs the question: ‘What is Bharat Mata’s caste?’