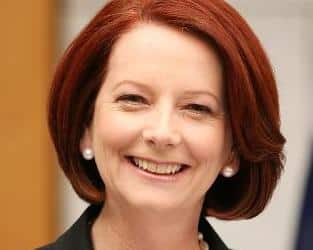 The Indian Australian community may be forgiven in not fully understanding the misogyny statements from the Prime Minister recently. While that rant directed against Tony Abbott, delivered in Parliament last October, went viral, the blue tie- misogyny speech of earlier this month has not gone down well. To many it ranked of crass opportunism.
Indian Australians are no strangers to having women in leadership positions. Some of the strongest leaders in contemporary Indian politics are women: Sonia Gandhi, Mamta Bannerjee, Sushma Swaraj, Mayawati, and Jayalalitha. You may or may not agree to their politics, but you will agree that they are all able to command a leadership position.
One of our best known prime ministers, Indira Gandhi, was so strong she was once described as ‘the only man in her (kitchen) cabinet’.
Going back a couple of centuries, Jhansi ki Rani was revered as a true leader in the first war of independence of 1857. In the Independence movement, strong women leaders like Sarojini Naidu, Kasturba Gandhi, Vijaylakshmi Pandit, Kamla Nehru, Aruna Asaf Ali, Sucheta Kripalani all walked shoulder to shoulder in the country’s march towards independence.
Even our neighbouring countries have had formidable female forces that galvanised the nation. Benazir Bhutto, Shaikh Hasina, Khalida Zia, Aung San Suu Kyi, Srimavo Bandarnaike, Chandrika Kumaratunga, all rose to top political office in their countries.
Recent polls may have suggested (rightly or wrongly) that South Asian countries may be the worst places to be a woman, but never has misogyny been an issue for these leaders. There may have been loud disagreements on policy (Mamta Bannerjee, take note!) and governments may have changed or been driven out, but personal life choices, dress sense, size or shape of body parts, and sexuality of partners have never the question of debate or comment.
As Prime Minister of Great Britain, Margaret Thatcher ruled with an iron fist. Single-handedly busting up the unions, she did not allow gender to even come into the equation. She led with her own brand of politics, and while many openly despised her, none brought gender into question. In the current Euro crises, the two individuals who worked the hardest to save the Europe Union were the German Chancellor Angela Merkel and the President of the Euro Union zone Christina Lagaard. While austerity measures were imposed in a number of countries, the protests were against the measures rather than the women per se who advised on these cutbacks.
Australia as a nation has come far in transforming society as a more open society for women.
Amongst women in power we have the governor-general Quentin Bryce, the prime minister Julia Gillard, NSW state governor Marie Bashir, Tasmanian premier Lara Giddings, ACT Chief Minister Katy Gallagher and ex premiers Queensland’s Anna Bligh, NSW’s Kristina Kennelly, Victoria’s Joan Kirner, and WA’s Carmen Lawrence. All have stood tall during their tenure. Who can forget the fortitude with which Anna Bligh handled the aftermath of the Queensland floods? Other than Gillard herself, none of the other women in the list above have brought up the issue of misogyny, at least publicly; they will all be remembered as leaders who did a tough job in trying circumstances (Kristina Kennelly is a shining example).
The gaining of political office, in whichever part of the world, has always been based on merit. The debates in such positions have, until recently in Australia, been centred around policy. It’s time for our leaders to let the gender issues slide, before they reach a new low, if that is possible.