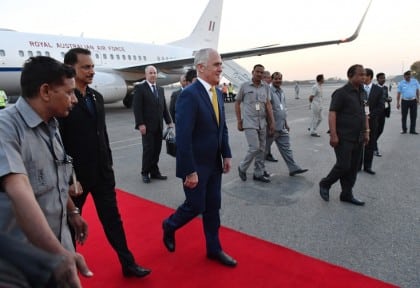 India will soon have the largest economy in the world. A way for Australia to benefit is to collaborative with universities, writes Craig Jeffrey, University of Melbourne

In 2060, India will be the most populous country, and likely have the largest economy, in the world. Roughly 20 million young people turn 18 every year, and according to some estimates, India’s middle class now numbers 300 million.
We have about 40 years in Australia to become a key partner of this future global centre. And there is no better starting point than higher education.
Prime Minister Malcolm Turnbull and Education Minister Simon Birmingham are currently visiting India, in part to promote higher education collaboration. Minister Birmingham has stated that his key objectives will include developing opportunities for Australian providers to deliver quality higher education in India, and emphasising Australia as an international education destination.
As higher education providers from competitor countries such as the UK are deepening their involvement in the Indian education sector, now is a crucial time for Australia to act.

India contains a complex higher education landscape, with 760 universities and around 38,000 colleges. Central government universities absorb just 3% of students and are relatively good quality. A wide range of state universities affiliate private and state colleges, which also award degrees. There is also a class of “deemed university” which was introduced fairly recently to cover private institutions established usually by business entrepreneurs.

…and the challenges it faces

As former Prime Minister Manmohan Singh stated – and as a new book shows in clear terms – the Indian higher education system faces major challenges. This partly reflects a decision by India’s first Prime Minister Jawaharlal Nehru to channel research funds to independent non-teaching institutes, which has left central and state universities relatively starved of funds. Indian universities – even elite institutions such as the Indian Institutes of Technology – do not feature in the top 100 universities in global rankings. The upshot for the ordinary Indian student is that he or she is unlikely to be taught by a research active faculty member, unlikely to be able to acquire a good education with up-to-date curricula, and unlikely to have access to excellent facilities either in terms of teaching or extra-curricular activities. Such deficits particularly affect the poor, women, rural areas, and north India.

So how does Australia fit into the picture?

The prospects for Australia to engage successfully with Indian higher education institutions are therefore not very high. Certainly, the focus to date has been on working with the top institutions. But this means the mass of state-level universities and colleges do not typically receive the benefits of foreign collaboration. Added to the problems are a relatively low knowledge base in Australia on Indian higher education and legal restrictions on foreign universities opening up campuses in India. The Foreign Providers Bill, which would change the law in this regard, has been stalled. But India’s current government is keen to reform higher education.

Prime Minister Narendra Modi has indicated his desire to develop foreign collaborations. The flow of Indian staff and students to Australia, and the beginnings of revitalisation of Indian studies in Australia, bodes well in terms of the development of partnerships and joint working. There are success stories, too, such as joint PhD programmes at Monash University and the University of Melbourne, as well as comprehensive ties with Indian higher education developed at Deakin University – among a fairly wide range of examples. Still, there is no sense in fudging. Such examples are – to use an Indian phrase – like the cumin seed in the camel’s mouth.

Five ways to do this

Australia, with a strong higher education sector and a particular strength in terms of the development of world-class full-spectrum universities, could expand collaborative efforts in several ways. These include:
1. Agree on the mutual recognition of qualifications in India and Australia. There are currently issues with the recognition of Indian students’ prior learning when they come to study in Australia. India also does not recognise some Australian qualifications, such as accelerated masters’ degrees.

2. Lobby the Indian government to allow Australian universities to open campuses in India where there is a compelling rationale for doing so. Apart from the direct benefits this would bring in terms of making foreign education available more cheaply to Indian students, it would allow the Indian government to benchmark their institutions against Australian counterparts.

3. Develop a wide range of staff and student champions of the Australia-India relationship, building on programmes already running and activity already being generated among staff.

5.Develop a set of specialist collaborative research institutes in India around key challenges facing India and Australia, for example around water, infrastructure, poverty, security, health, and governance. These could serve as a basis for full spectrum campuses in the future.

Given the inventiveness of other countries in devising ways of collaborating with India, there will be real costs if Australia does not engage with these ideas in terms of opportunities for research collaboration and offering valuable learning experiences to Indian students.
The UK, in particular, has made great strides in this space, such as the Research Councils UK partnership with India, even as its visa restrictions hobble efforts to develop student mobility between India and the UK. India and Australia have complementary strengths in higher education. A strategic approach could yield major benefits for both countries.
Craig Jeffrey, Director and CEO of the Australia India Institute; Professor of Development Geography, University of Melbourne
This article was originally published on The Conversation. Read the original article.