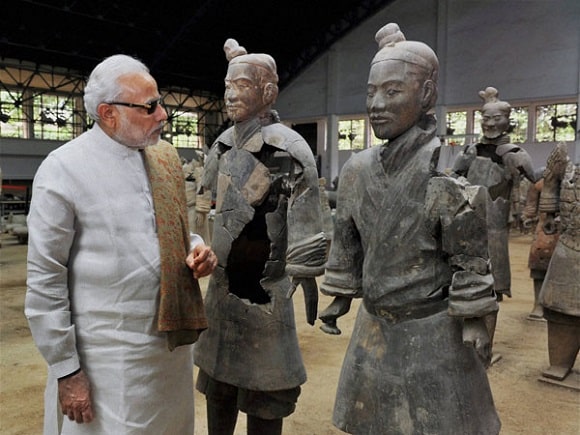 Reading Time: 3 minutesImproving global productivity may be as simple as looking to lessons from China

Sometimes, one thing leads to another quite seamlessly. In Hindu texts such as the Rigveda, there are various mentions of Ratha or chariots. They were made of Salmali (RV 10.85.20), Khadira and Simsapa (RV 3.53.19), respectively, woods of the Bombax Malabaricum, Acacia Catechu and Dalbergia Sissoo plants. (The Simpasa tree was mentioned by Lord Buddha in Simpasa Sutra and is called the noble tree from then on.) The Rigveda’s written texts are evidenced to be around 3500 to 3700 years old. Measurements for the chariots, some with multiple wheels, are found in the Shulba Sutras and are pretty spot on.
So, when I first heard that wheels were invented only 3000 to 3500 years ago, it was clear something was wrong, perhaps with the evidential matters of wheels. Wheels are not much use without axles so the focus of my research then shifted to both and then on to chariots.
In May 2013, a Slovenian wheel, exhibited at the City Museum of Ljubljana, was proven to be at least 5500 years or older. With regard to chariots, the first evidence is dated back to around 5635 or 5500 years ago, with a Bronocice Pot from Poland featuring a picture of a chariot. An earthen cart from the Ravi Period of Harappa is known to be around 5500 years old.
Historical evidence of wheels and chariots is fundamental to understanding the work of large armies with horses, warriors on foot, and warriors on chariots.
The West, South and Central Asia lost much evidence of its inventions during the global invasions by history’s aggressors and marauders. The unification of China’s six states into a country by its first Emperor Qin Shi Huang protected China and protected the Terracotta Warriors. This collection includes chariots, horses, foot soldiers and so on. Expressions on the face of each of the 8000 warriors are different and the horses and chariots are surprisingly life-like. From the pile of rubble excavated in 1974, China has made some gorgeous museums with frame structures.
Whether it was the making of the warriors or the mausoleum or the museum today, the meticulous work of Chinese workers over millennia is certainly noteworthy. Often the Chinese government is only discussed for their atrocities against workers, and while elements of this may be true, the fact is that the Chinese government can fix that issue and may already be doing it quietly. However, what is also needed is a fine management study of these workers, how they work so long, so well and the possibility that they in fact worked happily. How can we learn from their dedication, speed and sustained focus?
We must use that knowledge to improve our productivity without sacrificing our work ethic. This will help every field of human endeavour – the artists, fighters, soldiers, shop floor workers – practically all of us.
We must learn how China is able to deliver such a huge variety of goods, so fast, and how its government is able to build infrastructure so quickly, even assuming that permissions may not be an issue when the Chinese government makes up its mind.
There is no doubt that in all our knowledge, even if there are other worlds out there, there is definitely no world quite like ours. The Chinese are like just the rest of us. If they are able to be so productive and dedicated, how come we are not learning from them?
I prefer all countries to exist as they are, full and independent and sovereign, but sometimes it is good to think we are one world and not just 192 countries alone. This is one such time when we must see no difference between China and the world but make China one of us – the world’s newest teacher of the best productivity lessons; and, to learn those lessons well for the welfare of all of us!