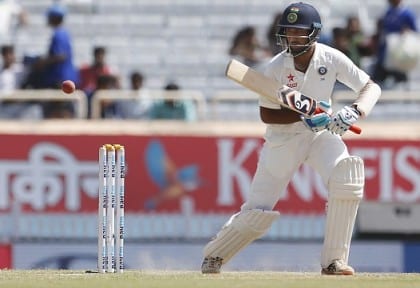 By the time curtains were drawn on the first two matches of this Border-Gavaskar series, Test cricket started to look like a Kardashian sibling trying to break the internet. In the third Test, Pujara decided that enough was enough, Kardashian be damned, Test cricket does not need these cheap thrills. So he changed the channels to show us Suraiya’s silent movie performances in an infinite loop. Did you notice the crowds in the Stadium? Yeah, I didn’t too. Because there weren’t any left after Pujara wrapped up his five-hundred-and-twenty-five-ball innings and restored normalcy.


Before the third match began, sports commentators were thrilled at the prospect of a revival in Test cricket. It started to look like boxing without the actual punches. Some people were even saying that there might be a few punches if Kohli doesn’t get back into runs. All that got lots of press. Indian media has been riding high on its team’s performances; even Australian media started putting cricket news on the front page. By the time the third Test was done, the tone of news coverage changed from an exciting narrative to level headed statistical analysis. All everyone talks about now is the glories of off-side defence techniques against the spinning ball on the final two days of a match in India. Yes. Boring.
With his widely praised marathon innings, India’s no.3 batsman managed to pull both teams from the brink of transforming cricket. He also gave a new lease of life to the age-old saying – ‘cricket is the real winner’. Philistines may call that a cliché. But when there is a draw at the end of a hard-fought five-day match, you have no option but to say that cricket is the only winner.
Rahul Dravid, one of my favourite players, had a reputation of boring the opposition to defeat in Test matches. His highest score of 270 runs came from 495 balls, so Pujara’s innings should not look too bad in comparison. Except that it did. In that Test in Rawalpindi, Dravid walked out to the crease at the end of Day 1 and batted only until Day 3, giving his team ample time to win the Test. He also scored at a strike rate of 55. Pujara’s innings was different in all respects. He walked out on Day 2, super-glued himself to the crease until the fourth day, consumed almost a full day’s worth of bowling (a single day’s game has typically 540 balls) to score just one-third of the team’s score at a rate of 38. At the end of Pujara’s opus, the lead was still not big enough to intimidate the opposition and his heroics even inspired the Aussies to do a Pujara themselves.
What inspired the man to go to all those lengths to secure a draw?  It wasn’t a bad pitch, as the fourth innings proved. It wasn’t an unplayable bowling performance, as the team score proved. India wasn’t on the ropes and trying to save the Test either. The answer to that question lies in the theory that Pujara, like Dravid, is a purist of the game. He was helping along to revive the true purpose of Test cricket. Dravid famously said that he did not play Test cricket for runs. He played for time. It appears that Pujara goes a step further. He not only does not play for runs, he does not play to win either. He plays to simply cement Test cricket’s reputation as the most esoteric sport that only a few enjoy and fewer understand.
Purists will tell you that there’s a certain timeless romance in Test cricket’s lazy five day matches that no other modern sport has. It slows down the hyperactive world around us and makes one appreciate the little things in life that one tends to miss while rushing to work at 110 KPH on the motorway. The wisdom of the hare and tortoise tale still holds value here. Rolling stones may have been on fleek for a few decades now, but the ones that gather moss are still sitting here. There are often no winners or losers here because well, there are no winners or losers in drawn matches. Test cricket, my friends, represents the values of a bygone glorious era. The same values which were briefly under assault by these ‘aaj-kal-ke-bacche’ in Kohli and Smith. Every generation needs a cricketer who will defy the belligerent new crop and plays the revivalist. Like Gavaskar when he carried his bat in a World Cup ODI scoring 36 runs in 174 balls in 1975. Just because he could.
Revivalism was in full swing in the third Test so much so that Gavaskar praised Pujara’s innings and called it a travesty that he could not secure a spot in IPL. Just to set the context, the total number of balls bowled by both teams put together in a normal IPL match is 240, and average runs scored per match is about 314. In the third Test, while the rest of the Indian team scored 401 runs off 735 balls, by no means a rapid pace, Pujara took 525 balls for his 202. He played out 400 dot balls in the process. That’s right. Let that number sink in.
“I’d rather watch the paint dry!” says my Kiwi colleague in Sydney when I bring up cricket. I might join him soon.
- Advertisement -
Share
WhatsApp
Facebook
Twitter
Linkedin
Previous articleFelicitating Hindi students from VCE 2016
Next articleAsk Auntyji: IT envy and property shock