United we stand, divided we… 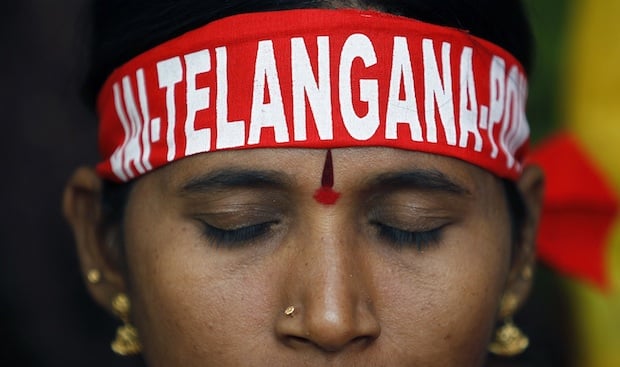 My homeland has been divided yet again… on 2nd June 2014, India witnessed the formation of its 29th state, Telangana.

I believe in a democratic, secular and tolerant India and hence, I believe the decision to form this new state is entirely wrong; socially, economically, politically and democratically.

Socially, a common dissent (amongst many others) voiced by the citizens of Telangana who aspired for a new state is that linguistically, they spoke different languages from the other regions of Andhra Pradesh. To quote, “my Telugu accent has always been ridiculed by those from other parts as I spoke a different version of the language”. Our country was divided along the linguistic lines at the time of state formation post-Independence, but within a state, every village or district speaks with a different style or accent even today and all of us have at some point ridiculed or been ridiculed for our accent or language. But does this qualify for demanding a new state, a new division?

Economically, the citizens of Telangana celebrate as if the battle has been won. But the real battle is yet to begin! The new government is faced with the mammoth task of the economics of running a new state. A principal reason cited for needing a new state was the fact that most regions of Telangana were economically backward and not given the due attention by the former Andhra Pradesh government. With a total land area of 114,000 sq. km and a population over 35 million, the only prized asset Telangana can boast of is Hyderabad, the technology hub of India which the new government believes can contribute tremendously to the development of the new state. Though the city of Hyderabad has the economic potential to bring Telangana out of its financial and developmental doom, it is important to realise that the rest of the state remains backward with poor infrastructure, farming or irrigation facilities.

Water is another issue on which the two divided states will continue to lock heads with each other. On one hand, the revenue and resources that the new government will need to pump in to uplift the majority of Telangana is colossal and to the tune of several billions, a task that might not be easy to achieve in spite of getting Hyderabad which practically functions like a satellite city. And on the other hand is the cost and resources required for setting up a new government and related governmental agencies and administrative offices. The truth is that the elected government does not have a clear blue print to address any of the critical issues facing Telangana today.

Politically, the riots and struggles for a new state began in the early 1960s. Initially, it was a public outcry against the landlords of undivided Andhra who exploited the farmers and other working class of the Telangana regions. Soon, the politicians discovered this sense of injustice in the minds of the public was a good way to gain votes and soon the public disdain became a political outcry. The Telangana Rashtra Samithi (TRS) formed in 2001 was a result of this and the party chose to form an alliance with the Congress (which held the stronghold at that time) in the hopes of a new statehood. But the Congress party had no such inclinations and hunger strikes, riots and social unrest became the order of the day. When the date for the 2014 general elections was set and the Congress party realised that it could be wiped out from power, the decision for the new state of Telangana was pushed in a last minute attempt to gain a couple of votes from the region. A petty political miscalculation which cost the party dearly in the general elections.

Democratically, as we get closer to completing 68 years of independence, it is a saddening thought that we still follow the ‘divide and rule’ policy of the British Raj which destroyed our land. We did not need a separate state; we needed a sensitive government to understand the real plight of the people. We did not need to cut ourselves up on the basis of language and regional differences; we need less corrupt leaders who would direct funds in the right manner to promote growth and development. And above all, we need to exercise tolerance, a sense of unity and brotherhood, a trait in such short supply among Indians back home and around the globe.

We should have learnt from our past mistakes, the glaringly obvious ones like Jharkhand. It is going to be a lonely road for Telangana and Seemandhra, but here’s to hoping the new leaders can deliver the promises made. As well as hoping that the new government does not divide and cut up India again into Gorkhaland, Bodoland and Vidarbha for petty political interests.