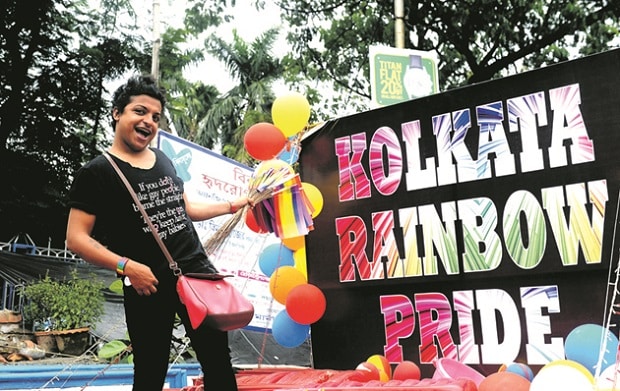 Reading Time: 4 minutesThe gay rights debate continues in India after a devastating reversal by the Supreme Court. By Jyoti Shankar

It was a Facebook spat between two young people I know, living in different parts of the world, that set me thinking. Do we have a right to judge what we don’t understand and what is beyond our sense of normalcy? Do we have to be intolerant? Do we have to voice our opinions and prejudices in social media? This whole business of likes and dislikes? Are we so into ourselves that we have stopped caring about things that really matter?

The topic was homosexuality. “Hats off to The Honourable Supreme Court of India. Homosexuality is illegal and a crime in India. I mean homosexuality is observed in 400 animal species but still it is not a natural way of sexually exploring yourself. Our ancient Ved Puranas also don’t allow this. We are proud of our own rules and culture,” said a friend in India. “Are you seriously proud of this? Is it a personal injury or insult to you if a man and a man or a woman and a woman want to be together? As citizens of India, these people have the same rights as you. Who are you to call these people criminals?” Was the reply from Australia. The argument continued, “thanks for your opinion… it is not my verdict but the verdict of Honourable Supreme Court Of India… those are far more intelligent people than you and me who lay the rules for the whole country. 1,000 years ago it was we who taught the world to be civilised and laid our own culture. Indian culture does not allow us to be homosexual. It is now vice versa we are now forgetting our own tradition and quickly adopting these western flaws.” Defriending ended this argument but it set me thinking. How many of us think along these lines?

Under section 377 of the Indian Penal Code 1860, it is an offence for a person to voluntarily have “carnal intercourse against the order of nature”. It wasn’t until 2009, in the Naz Foundation case that Delhi High Court found Section 377 and other legal prohibitions against private, adult, consensual, and non-commercial same-sex conduct to be in direct violation of fundamental rights provided by the Indian Constitution. This decision was welcomed by people all over the world.

Though hardly 200 people have been convicted under this law in over 150 years, homosexuals in India, and there are an estimated 50 million, are often harassed on this basis. On 11 December 2013, the High Court decision was set aside by the Supreme Court of India. While many in India welcomed this, like the first young person in my story, on the basis that it upheld “Indian culture,” many have been saddened by this retrograde step. Gay right activists believe that this will lead to further alienation of LGBT persons (Lesbian, Gay, Bisexual and Transgender) and cause a setback to AIDS prevention efforts. Naz Foundation who started the case that led to the Delhi ruling, will be filing a petition for review of the SC decision.

Seeing one of my favourite authors, Vikram Seth, so incensed with the judgement that he consented to appear on the cover of the recent India Today looking dishevelled and angry and holding a chalkboard that reads, “NOT A CRIMINAL – To not be able to love the one you love is to have your life wrenched away” is sad. Seth is a master of words and the heart-wrenching words in his essay on gay rights move.

“Of all the cruelties that we as human beings can visit on one another, one of the most cruel is to say: You may say you love each other, but I do not care,” says Vikram Seth. “No, you have not harmed me, but I will harm you. I will disown you, I will treat you with contempt, I will make you an outcaste or a criminal, I will lock you up. I will break your legs, I will fling acid in your face, I will hang you from a crane, I will stone you to death. If the mob helps me, so much the better. If the law helps me, so much the better. If I can wrap myself in a flag, so much the better. If I can drape religion around myself, so much the better… What makes life bearable is love – to love, to be loved, and even after death or parting – to know that you have loved and been loved. To not be able to love the one you love is to have your life wrenched away. To do this to someone else is to murder their soul…”

Can anyone who has loved and been loved, be so cruel as to deny another human being their basic right to love? What harm does this cause you, other than a perceived sense of damage to your so called morals? When will society wake up to the bigger problems of life? It is absolutely wrong for a person to sexually abuse a child, domestic violence is wrong, the rape of our environment to enrich private coffers is wrong, mistreating those who work for you is wrong. Let us make some noise about these wrongs. There can be no way to justify these kind of wrongs but homosexuality is no one’s business. If you are born inclined in this way, who am I to challenge your feelings? Wake up people, open your mind and your hearts. No one deserves to be treated this way.