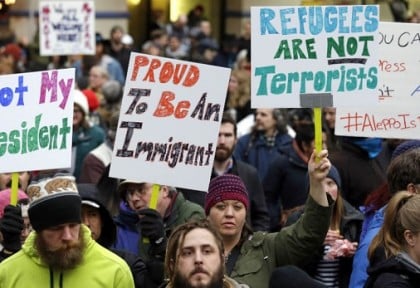 When it came to speaking up against a xenophobic US President, Australian PM Malcolm Turnbull let us down badly

Airports and streets around the United States have been filled with protestors showing their anger against President Trump’s executive order banning people from certain countries from travelling to America. Unleashing chaos and outrage, this executive order has been condemned for what it is – xenophobic, mean spirited and racist.

While the international community has expressed shock, there has been deafening silence, strangely, from the Australian government. More on that later.
What is heartening to note is how the corporate world has reacted to the situation. Whether driven by humanitarian concerns or the need for open global boundaries, a number of corporates have reached out to counter the executive order.

Starbucks has said that it will hire 10,000 refugees over the next five years as their way to allow for best opportunities for new migrants. Airbnb said soon after the Trump announcement that it will provide free housing to anyone left stranded by the ban. Its co-founder and chief executive Brian Chesky said, “Open doors brings all of US together. Closing doors further divides US. Let’s all find ways to connect people, not separate them. Not allowing countries or refugees into America is not right, and we must stand with those who are affected.”

Other technology-centric companies which have a large number of migrant employees also weighed in. Apple CEO Tim Cook stated that Apple would not exist without immigration. Jeff Bezos, Amazon’s chief executive said, “We’re a nation of immigrants whose diverse backgrounds, ideas and points of view have helped us build and invent us as a nation for over 240 years.”
Netflix condemned the President’s ‘un-American’ actions.
Google cofounder Sergey Brin was at the San Francisco airport protest, “because I’m a refugee”, while CEO Sunder Pichai joined the other employees in their protest.


Goldman Sachs, 21st Century Fox and JP Morgan also voiced their opposition to this travel ban.
It is at times of crisis like these that true leadership is shown. Corporate America is vociferously fighting back and adding its might behind protests around the country.
What has been shocking is the Australian government’s complete silence on the issue. Prime Minister Malcolm Turnbull has refused to condemn or speak out against the injustice of this racist order. Hiding behind the guise of not wanting to interfere in another country’s domestic policies, Mr Turnbull has shown a side of himself which is disappointing. Other world leaders such as British Prime Minister Theresa May, French President Francois Hollande and German Chancellor Angela Merkel have all spoken out against Mr Trump’s clampdown, while Canadian Prime Minister Justin Trudeau has said his country would welcome refugees.

Here was a chance to reassure Australia, a country of migrants, about the importance of diversity. Wasn’t it only days ago that our Prime Minster had waxed lyrical on this very topic? On Australia Day, Turnbull had said, “Our First Australians have… the oldest continuous human culture on earth and it enriches us all. As do the cultures of all our migrants from every corner of the world. Each new Australian adds another thread to our national tapestry, magnificent in its diversity and the most successful multicultural society in the world. We come from nearly 200 countries of all faiths, cultures and backgrounds. And yet in a world where conflict and intolerance seem more intractable than ever, we live together in peace… (Our) strong sense of justice springs from the solidarity, the mutual respect and mateship that binds us together in our diversity. Together we have built a remarkable nation.”
Great speech then, Mr Turnbull, but when it came to speaking up against a xenophobic President, you let us down badly.
- Advertisement -
Share
WhatsApp
Facebook
Twitter
Linkedin
Previous articleLeadership, Sikh style
Next articleOne in three must end with me