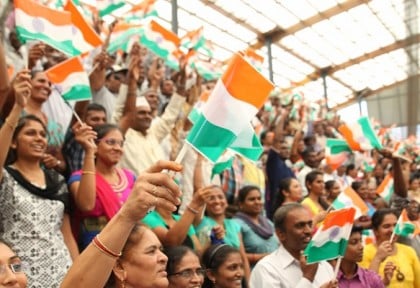 Traditional societies continue to remain connected in modern times, their notion of community going beyond the sociological

How do we define community? Is it the family, the neighbourhood, the country or the sub-cultural group? Each of these has a limited frame of reference. In a cosmic sense, the term community should extend to global inclusion of human and other life forms which inhabit the world as we know it. Unless we look to the whole picture, where each of us is interconnected to the other, we fall into the trap of individuality, wherein trust, tolerance and compassion disappear at a rapid rate.

Recently, social researcher Hugh Mackay delivered the Gandhi Oration at UNSW. He aptly titled his talk “The state of the nation begins in your street”. With his cheeky humour, he highlighted the rather sorry state of affairs in modern urban communities where a large percentage of people don’t know their neighbours, and don’t make eye contact as they walk on the street, if they do happen to walk. Urbanites are increasingly becoming insulated in our pigeonholes, he said; we are becoming less and less social.
The industrialised world has led to us spending more time with machines than with people. Yet in traditional societies, opportunities for communal celebrations are still valued. Just a month ago, on 14 January, millions of Hindus in India and all over the world celebrated Makar Sankranti.
Makar Sankranti is one of four major festivals celebrated all over India.
Sankranti is a Sanskrit word that means ‘movement’ or ‘transition’. Makar is the Hindu name of the zodiac month Capricorn. As the sun transits on its northern journey, this day is celebrated as the end of winter in Punjab (Lori), Makara Bighu in Assam, Makar Sankranti in Gujarat, Pongal in Tamil Nadu and the first sighting of the Makara light in the Sabarimala (hill) in Kerala. Everywhere it is held, the celebration is a joyous one with a variety of food made from the newly harvested ingredients like rice and pulses.

The main theme is celebrating the harvest, giving thanks to nature, and praying for a good year ahead. There is a reaffirmation of beginning the year with purity of heart by bathing in the holy river, and giving alms and food to those in need before partaking of it. The festival is celebrated in a communal way, reminding us of the importance of community, from our immediate and extended families to the wider community we live in. It’s also a reminder of our dependence on the earth, sun, and fire, and our coexistence with animals and birds – in short, appreciating the beauty of the world we live in.
Pongal in Tamil means an overflowing abundance. The new harvest of rice is cooked in milk, in large pots on an outside fire, allowed to boil over and when ready, offered to the sun. Women dance around the pot and share the meal with family and friends.
The day before, called Bhogi, involves a bonfire made of unwanted material things; symbolically, one also burns the negative emotions such as anger, jealousy and hatred to create space for benevolent thoughts to fill the mind.


The day after Pongal is celebrated as the day to appreciate the hard toil of the bulls on the farm by decorating their horns and giving them a day of rest. The birds are fed with colourful rice balls. In the Hindu belief system, birds symbolise our forefathers, once again reminding us of the gratitude we owe to all of nature’s creations as well as our heritage.
Almost all activities during various celebrations in Hindu households are filled with symbolism and illustrate the very nature of the act and its significance. The fresh produce from the harvest, and the unique celebration of nature’s ultimate inclusion in everything we do, both compel us to revere and respect and nurture everything around us.
As migrants in a different culture, there is a tendency to discount traditional beliefs and activities as ritualistic. When people care to inform themselves about the meaning behind a specific spiritual activity and then carry it out, it becomes an uplifting experience beyond just a ritual. For instance, kite flying, another popular Hindu ritual at this time of the year, is enjoyable as an activity, but it also gives a sense of hope and higher aspirations, looking to the cosmos and the wind for inspiration, and the enjoyment of the freedom of our spirit.
Communities nurture those with wounded hearts and give hope to people in despair as much as we double the happiness derived from the act of communal celebration. Let us celebrate, share, enjoy and enrich our lives and the community we live in.
- Advertisement -
Share
WhatsApp
Facebook
Twitter
Linkedin
Previous articleHoist the flag!
Next articleI’m a big kid now