Quantico controversy: Does the Priyanka bashing even make sense?

Why is everyone targeting Priyanka Chopra for a fictitious episode when no one is punishing perpetrators of real heinous crimes in India? 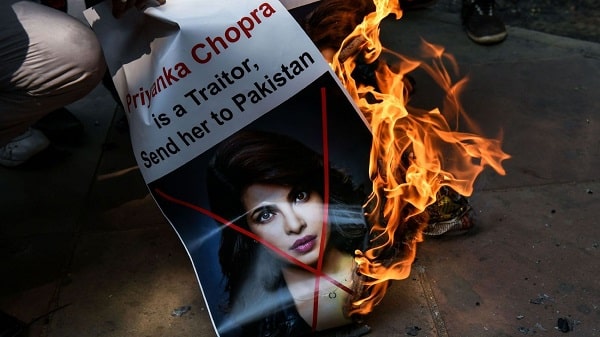 Reading Time: 3 minutesIt is perhaps the most curious but unfortunate quirk of public life in India: stay on the straight and narrow, toe society’s line and you will be treated with – often literally – religious reverence.
But make even the most miniscule of missteps and you face more than mere excommunication; you and your family are threatened with murder, your house pelted with stones, and your effigy burned in the streets.
So learned Priyanka Chopra recently, after the Quantico star appeared in an episode of her US show that portrayed Hindu nationalists as terrorists. The vitriolic aftermath was a harsh reminder of the mob mentality underpinning Indian society, stemming not just from a failure to distinguish reality from fiction, but an inability to control either the meaningful or the frivolous.

The episode titled The Blood of Romeo, which aired on US network ABC, portrayed Chopra’s character thwarting a terrorist plot ahead of a summit on Kashmir. In it, Chopra’s character discovers that it is not Pakistani terrorists plotting the attack as initially hinted, but rather Hindu nationalists attempting to frame Pakistanis.
The reaction back home was swift. Many declared Chopra as an “insult to India”, while others stated that the “entire episode was not just an attack on Hindus but also an attack on India”. Activists from the Hindu right-wing group Hindu Sena burnt posters depicting Chopra, calling for her to be sent to Pakistan, while death threats were the order of the day on social media. Chopra was forced to issue an apology, tweeting “I’m extremely saddened and sorry that some sentiments have been hurt by a recent episode of Quantico. That was not and would never be my intention. I sincerely apologise. I’m a proud Indian and that will never change.”

I’m extremely saddened and sorry that some sentiments have been hurt by a recent episode of Quantico. That was not and would never be my intention. I sincerely apologise. I'm a proud Indian and that will never change.

Unsurprisingly, this was not enough for her detractors; the overwhelming majority of the response continued to advocate for a boycott of Chopra’s movies, at the least. “Too late to feel ‘saddened’!” stated one. “You could’ve refused to act in an episode that degraded your nation and termed the most peaceful of all religions ‘Hindu Terrorism’. You could be an atheist or agnostic but you are associated with thousands who believe implicitly in their faith!”
The irony in this sanctimony is, of course, that fundamentalist Hindus are no more peaceful than their equivalents in all other religions, whether Islam, Christianity or Buddhism. Nor is Indian nationalism any more honorable than that of other countries, and certainly not to the extent that its negative portrayal is unrealistic.
Take, for example, the recent gang-rape of an 8 year old girl – and subsequent cover-up – by a group of Hindu men in Jammu and Kashmir. Thousands marched around the country in support of the men, including politicians, their justification being that Muslim men had also raped many Hindus, a classic case of whataboutism that cripples political and social discourse. The current landscape makes this much clear: in Modi’s India, it is more important than ever that duality in story-telling is closely and viciously protected.

While grappling with the nuances of politics and religion may be a difficult albeit important line for filmmakers and writers to tread – particularly in the current global climate – India’s siege mentality is no recent phenomenon and its proponents regularly wage war on more than just the film industry. It is almost a rite of passage, for instance, for Indian cricket players to suffer death threats in the aftermath of a poor performance, or for Indian authors to be forced into hiding for espousing views to which the mainstream may be opposed. But the exhilarating highs they occasionally enjoy do not justify these crippling lows.
To understand the basis for mob outrage, it is critical to first consider its objectives. And they are basic: to identify a target, lay blame and to try and wrest back at least some semblance of control in a society where accountability and control are not just elusive, but often impossible.
The struggle to be heard in a country so vast is a challenge in its own right; but also feeding into this is a cycle of rampant corruption, political opacity and overwhelmingly, fear.
When nothing of substance changes for the better, all that is left is the low-hanging fruit of the meaningless and the benign – television, books, sport.
And in these circumstances, group vitriol and mob violence are often merely the simplest solution to a very real fear: that one person does not matter, that one voice counts for nothing.
But, overwhelmingly, this is a fear which underpins humanity itself.