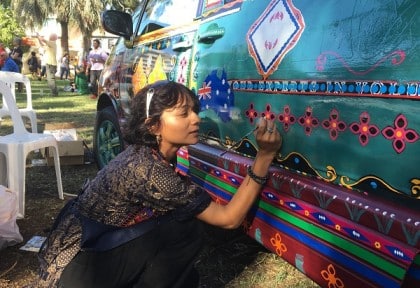 … but was there oneness of spirit, asks RAJNI ANAND LUTHRA

The brand of Parramasala is well known in the multicultural space in our city. It was afforded a new lease of life last year when the NSW government announced its support for 4 years with a funding of $1.6 million. This brought a sense of certainty to this celebration of all things multicultural, and was welcomed as an opportunity to set up a long-term platform for showcasing multicultural art.
So, did it fulfil its mission this time round?


While there were flashes of creativity, a central unifying theme seemed to be sorely missing yet again. What, indeed, was the leitmotif at the festival? Was it harmony, enrichment, assimilation, integration, contribution to the mainstream, new identities…? Or was it merely sufficient for the artistes to be of ‘multicultural’ background, nothing more?
A variety of performing arts were on offer – from music, dance, theatre, cinema, circus, sound and light shows, and even fashion and food. These came from many sections of our society – Indigenous, Chinese, African, Indian, Sri Lankan, Pakistani, Bangladeshi, Syrian, Cook Islander, Mongolian, Lebanese, Brazilian and Uyghur communities, and gave us a sneak peek into each of these cultures.
The street parade, it was claimed, was bigger than ever before.

There was a steady flow of visitors both days at Prince Alfred Square, which was a hive of activity. Some of the attractions were unique – the Bioscope man, Pakistani truck art, Chai-Shai, the food stalls and the bearded bakers Knafeh. The technology district, a great new addition, provided hours of joy to young and old alike. The two stages though seemed a bit at odds, often clashing with their respective sounds as acts came on simultaneously. But they held the crowds in, perhaps to the disadvantage of the food trucks in Spice Alley who must have felt a bit left out as compared to the food stalls within the park.
There didn’t seem to be much awareness amongst the visitors about the events inside the Riverside theatres, and none at all of those on the foreshore (in fact a brief visit there gave the incorrect idea that perhaps the events were cancelled because no one was around).

Was there any signage at all, anywhere outside the precinct, such as at Parramatta station?
What the festival seems to lack (and this paper has raised this in earlier reports) is a vision of what it stands for. Year after year, we are treated to the same parade with participants cheered on by the café diners on Church Street, and then two days of market stalls and stage performances that are not promoted well enough to create a buzz in the community. In contrast, one has only to look at the Premier’s Multicultural Dinner which managed to pull together role models from the multicultural community in the fields of entertainment, sport, fashion etc. Singer Paulini, rugby league legend Greg Inglis, fashion designer Akira Isogawa were among those who came out to showcase their unique identity in – and contribution to – the wider Australian society.
A major supporter of Parramasala with its live broadcasts, ABC Radio, was sadly missing this year.

Perhaps what was saddest of all, was that the organisers completely missed that the event coincided with Holi. The Indian festival of colours has been appreciated by the mainstream community overwhelmingly in recent years. It never fails to liven up participants, and with its core emphasis on “letting go”, does truly help bring people together. A Holi element would have made for a more colourful – and enjoyable – Parramasala this year.
This multicultural festival desperately needs an overarching theme, better management of resources, better-known acts, a more imaginative use of the Parramatta precinct, and better promotion of the various satellite activities.

The Board of Directors at Parramasala needs to be more accountable for their submission to the funding authorities as to their contribution to the arts and culture vision for Parramasala.
It is up to them both now, to clarify a better vision for the festival over the next three years.
At a time when some of the basic tenets of our multiculturalism are under threat, such as the proposed changes to Section 18 C of the Racial Discrimination Act, it is even more significant to have a performing arts festival which is robust and showcases the values and successes of our diversity.
To read more about Parramasala 2017 click here
- Advertisement -
Share
WhatsApp
Facebook
Twitter
Linkedin
Previous articleChampion chestnuts!
Next articleParramasala potpourri