On the road with NaMo 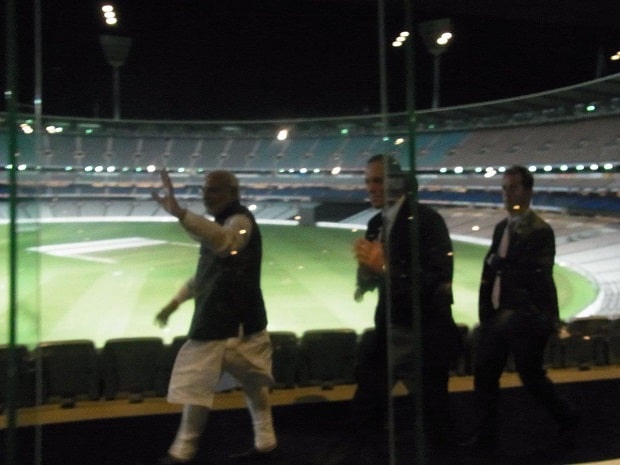 Reading Time: 5 minutesTrying to keep up with a man who barely sleeps is exhilarating as well as exhausting

Never did I imagine that I would be in three cities in two days tracking the Indian Prime Minister.

I was there as he entered through the metal doors at a private reception for the Indian community, prior to his historic address to over 16,000 delirious fans at the Allphones Arena in Sydney. I also believe that I was the only person who captured his final wave as he walked away through the glass door at the side after the state dinner hosted by PM Tony Abbott at the MCG.

My humble camera captures both these moments, albeit badly.

Between these two moments, I followed the frenzied build-up to his visit to Australia as hordes of Indian media descended on Sydney, for an event expected to surpass the Indian PM’s American address at the Madison Square Gardens. The morning of 17 November dawned bright and clear, and I am sure the organisers could have filled out the 50,000 plus seats at the Sydney Cricket Ground with people wanting a glimpse of this man known for his winning oratory.

After finishing late at night at the Allphones Arena in Sydney, I took an early morning flight to Canberra to witness Prime Minister Modi receive the guard of honour from the Australian Federation Guard made up of members of the Royal Australian Navy, Australian Army and Royal Australian Air Force. The canons boomed in the front court of the Parliament House as Australia’s finest honoured the Indian Prime Minister, while hordes of Australian Indians cheered on from the sides.

The public gallery at the Australian Parliament Chamber was overflowing with invited guests who sat quietly waiting for the official proceedings to begin at 10.05 am. As PM Modi entered, escorted by the Sergeant at Arms, the gallery could not restrain their applause.

Mr Modi spoke eloquently in his third language of English (after Gujarati and Hindi). While his address had light-hearted moments, which had the Parliamentarians laughing politely, he also hardened his tone as he made clear that all countries, including China, have to live peacefully in the East Asia region. It bodes well for the Australia-India relationship that he got mobbed by the Australian MPs on his way out.

Later, as I crisscrossed my way to Melbourne via Sydney (as all flights to Melbourne from Canberra had been booked out), I could see Air India One (also referred to as AI-1 or AIC001) on the tarmac at Canberra airport. Thought about asking for a lift (hey, fellow Indian to fellow Indian, why not?), but decided against it as I saw the heavy Special Protective Group (SPG) out in full force.

My third city in a day got me to Melbourne for a business leaders’ meet and then a community meet-and-greet at Government House. The Grand Hall was overflowing again, and it seemed the Modi Express had travelled in reverse, bringing Sydneysiders south to Melbourne.

While PM Modi was being feted by the corporate gurus in a private session, other stalwarts such as those from the field of sports got a chance to do so at the less formal community meet. The chants of “Modi! Modi!” were heard yet again from the crowds, even though this time round, Modi appeared more subdued.

Was it a deliberate attempt to show less bravado and more restraint, to fit the occasion? Or was it a touch of exhaustion, given the hectic schedules of the past few days?

Perhaps in Sydney the ability to talk in Hindi gave him a natural flow, and the sheer occasion of Canberra brought out the orator in him. But the tank seemed a bit empty in Melbourne.

Yet at the hallowed grounds of the MCG, PM Modi took some time to “examine” the pitch. I almost expected him to take the keys out of his pocket to test the softness and dampness on the pitch to give the Indian cricket team a heads-up as what to expect when they play there on Boxing Day. But in the spirit of fair play, or perhaps in fear of being shirt-fronted by Tony Abbott on this unsporting gesture, he resolved instead to simply enjoy the moment.

At the reception that followed, one could hear the quiver in the voice of Prime Minister Abbott. Wonder if the Indian TV stations played Dire Straits’ ‘Brothers in Arms’ as Tony Abbott and Narendra Modi gave each other a hug.

Modi’s demeanour also cracked as he felt the genuine affection in the room.

The Private Members Dining area was anything but private as the State Banquet hosted by PM Tony Abbott brought out the corporate elite, the Indian Australian community, academics and business leaders. The evening went into wind-down mode with entertainment from The String Divas and Circus Oz. To honour the Indian Prime Minister the trio from The String Diva belted out the unofficial national anthem of India, ‘Jai Ho’. And while he no doubt enjoyed this number, it was the ABBA song ‘Mamma Mia’ which had his host Tony Abbott do a jig on his seat. One almost expected him to ask Modi to join in a bit of a dance, but unfortunately there were no garba sticks available to create this ABBA-Falguni Pathak fusion.

Mr Modi had a quizzical look on his face as the medley of ABBA songs continued (yes, my camera did capture that) and he was thankful for the diversion by Estelle Parker from DFAT who got his attention. She had been in charge of taking care of Mr Modi when he visited in 2001 and wanted to say hello. Much to her delight, he remembered her and warmly took both her hands in his as he introduced her to Mr Abbott.

Even as Mr Modi expressed his gratitude to a friend from 13 years ago, Australia’s richest person and the world’s sixth richest woman, Gina Rinehart stood patiently by to talk to the two Prime Ministers.

While politics and business minds interacted, the two ‘Can Do’ Prime Ministers (perhaps Commonwealth Bank needs to trade mark their slogan) also posed for photos with not only Gina Rinehart but yours truly as well. Not far from them sat cricket legends from both sides such as Sunil Gavaskar, Kapil Dev, VVS Laxman, Steve Waugh, Glenn McGrath, Michael Kasprowich, and business figures such as Ashok Jacob, Maurice Newman, Vishal Sikka and Manoj Nagpaul. And seemingly the full front bench of the Abbott government.

And then it was time to go. Showing amazing dexterity for a 64-year-old man, and with a puffing PM Abbott struggling to keep up (note photo), Modi, with a wave of his hand, was gone.

And so it was veni, vidi, vici – Modi came, saw, conquered – the hearts and minds of people down under.