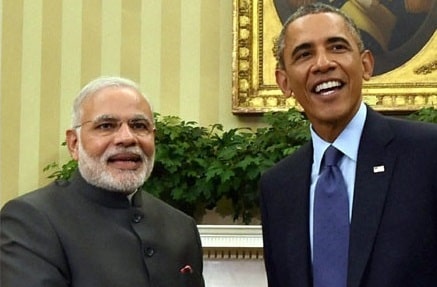 Reading Time: 3 minutesAll eyes will be on special guest US President Obama this Republic Day

While the 26 Jan Republic Day parade is an extravagant and spectacular display of all things Indian, what with over 6000 marchers, 5000 artistes, 1200 students, 111,000 seats, 140,000 bulbs and six months in the planning, all eyes will be on the chief guest this year, US President Barack Obama.
While this is the first Republic Day parade to be attended by a US president, it is also interesting to note that for this international tour, President Obama has only one destination on his itinerary, India.
That the United States is looking to further consolidate its relationship with India is not only an acknowledgement of India’s growing economic muscle, but also the strategies which India has adapted since the Modi government came into power in May last year. Both India and the US are aware of the growing influence of China in world affairs. In the past, India has failed to act on the push which China was making in its immediate vicinity. The buffer state of Nepal has been visited by PM Modi not once but twice in the last six months. In Bangladesh, India’s Adani group has put their hand up for an $8 billion deep water port project for which Chinese company China Harbour Engineering Company was the front-runner. PM Modi has rekindled ties with Japan which is in a territorial dispute with China over its islands in the South China seas.
Rather than allow China room to build up unfettered influence in South East Asia, the new government under PM Modi is coming across decisive and, in the case of Sri Lankan politics, seemingly interventionist. While it is being denied by New Delhi, diplomats and politicians in the region have said that India helped bring the various opposition parties together against the pro-China Rajapaksa. Rajapaksa had increased India’s ire when he allowed Chinese submarines to dock in Colombo harbour not one but twice, in September and November. This was in breach of an agreement which India has with Sri Lanka. He also awarded a $1.5 billion deal to the China Communication Construction Co Ltd to build a 233-hectare patch of real estate on redeveloped land overlooking Colombo’s South Port, which was a concern for India, the destination for the majority of the trans-shipment cargo through Colombo. Rajapaksa’s successor President Maithripala Sirisena has said that he will review all projects awarded to Chinese firms, showing his awareness of Indian anxiety. The new leadership is likely to scrutinise both the level of Sri Lankan financial indebtedness to China and allegations of favouritism involved in a Chinese port-related project in Colombo.
The United States has always had a friendship of convenience with Pakistan, from the days of the Cold War to the time of the Soviet incursion into Afghanistan and then to counter the Taliban in Afghanistan. But there were always growing doubts about the closeness which the Pakistan military and Secret Service shared with the Taliban. The US is more than happy to forge a new friendship with India, not only because of its economic resurgence but also its strengthening diplomatic muscle.
Indians in Australia will be well pleased to note this new chapter in India’s foreign policy. With Australia’s natural closeness with United States, the regard now being shown to India by the United States must be good to see.