NRI opportunities for the government of India 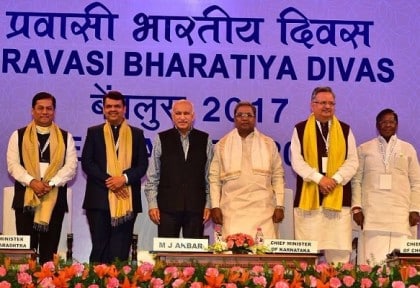 With all they have to offer, the diaspora should be better engaged by the Indian government

India has just celebrated its 14th Pravasi Bharatiya Divas in Bengaluru. Heralded as the largest ever gathering of overseas Indians, the event was attended, as per official estimates, by over 7,000 delegates, of whom 1500 were NRIs and 500 were floating NRIs. This from over 30,000,000 NRIs globally. Yes, less than 0.007% of the target audience were in attendance.
Once the annual conference is over, it may be worthwhile for those in charge to question whether there is a better way to engage with global Indians. That they want to engage is clear from the ongoing staging of the Pravasi Bharatiya Divas (PBD), but is this annual talk fest winning and making inroads in the hearts and minds of the NRIs?
Do they deserve more from the government of India?

On one hand, when NRIs relinquish their citizenship or residence status, they are less of a responsibility of the Indian government. Yet, what the NRI has to offer to India, should be enough of an incentive for the Indian government to work through ways of greater engagement with this community.
The 30 million non-resident Indians are largely highly successful in their new country. According to an estimate from a leading US source, “If NRIs were a country, their GDP would be in excess of US $800 billion, equal to 40% of India’s GDP, even though their population is less than 3% of resident Indians.” There also is an estimate that NRIs’ remittances to India stood at US$68.91 billion in 2015, accounting for over 4% of the country’s GDP. This is growing as more Indians fan out across the globe.
Looking at the financial returns alone, without taking into account the soft power opportunities which this community can exert, this is an extremely important resource which should be marshalled and used to work towards India’s growth.
With an estimated 500,000 people of Indian origin in Australia, we do represent a very small part of the ‘Indiaspora’. But what we lack in numbers, we do make up in passion for all things Indian. Just look at the turnout during the India-Australia cricket series, or the revenue figures from Australia when major Bollywood blockbusters are released, to become aware that while the “Indian can be taken out of India, it is harder to take the India out of the Indian”.

On a more practical basis, PBD details need to be circulated in the community much earlier in the year rather than a few weeks prior to 9 January. Most Indian Australians plan their India trip during this holiday time much earlier in the year, and knowing details of PBD may allow for a greater participation. Perhaps working on a delegation representing Australian Indians to attend as a cohort, may bring further momentum from the community.
PBD is but one occasion of the many opportunities for the Indian government to engage with the local community. Inviting greater interaction from the community such as an Australia India Day for an open forum to meet with consular officials, could be one such new opportunity, by way of example.
After all, the passion for providing greater opportunities for India is shared by both Indian government offices here, and the local Indian community.