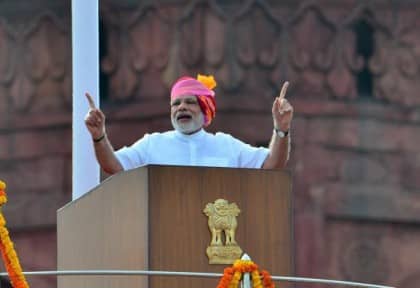 Indian Prime Minister Narendra Modi celebrated the seventieth anniversary of India’s declaration of independence along with his country on 15 August. In keeping with the tradition established by the first Prime Minister of independent India, Jawaharlal Nehru, Mr Modi addressed the country from the ramparts of the Red Fort in New Delhi, the seat of the Mughal dynasty. In keeping with his own ways, Mr Modi provided a “report card” on the functioning of his administration to the people of India. His speech, which ran for over an hour and a half, touched upon issues such as economic progress, keeping inflation in check, ensuring financial inclusion, education drives, health and the provision of electricity to villages.
It is interesting, to say the least, that he did not expend much time or effort on elaborating on the issue that could possibly become one of his greater accomplishments: the Goods and Services Tax that, for the first time, could see India become a single, unified market of 1.25 billion people and a US$2 trillion economy. The backers of the new tax system believe that it could see India’s growth rate increase by a further two per cent and create employment opportunities. It would not be cynical to state that the benefits that the GST can bring to India could see Mr Modi and his party re-elected to office in 2019.

These issues notwithstanding, Modi’s speech was most notable for his allusions to human rights abuses in the Pakistani province of Balochistan and the Pakistani-administered region of Gilgit-Baltistan that borders Kashmir. Whereas previously Pakistani leaders had spoken of “freeing” Kashmir from India, their Indian counterparts would, at most, refer to Kashmir as remaining Indian. Modi broke with that stand, surprising Pakistan and leading its political leaders to declare that he had “crossed a red line”. Pakistan’s leaders have, since independence in 1948, called on India to hold a plebiscite in Kashmir to allow the people there to decide if they wish to accede to Pakistan or to remain with India. As a previous FDI analysis has shown, this is a very one-sided argument that, if India were to agree to it, would require all Pakistani troops to be withdrawn from Kashmir before a plebiscite could be held. Mr Modi said that after he previously mentioned the issue of human rights abuses in Balochistan and Gilgit-Baltistan, the people of those regions thanked him. As he stated, ‘I am grateful to the people of Balochistan, Gilgit and PoK [Pakistan-occupied Kashmir] who have thanked me in the past few days. If the people of Balochistan thank me, they are thanking the 125 crore Indians.’ It appears that has initiated a new, hardened attitude towards Pakistan.
Reports of human rights abuses in Balochistan and Gilgit-Baltistan (also here) have caused a considerable degree of discomfort in Islamabad. While the publicity that these reports generate adds to the negative perceptions that Pakistan faces internationally, the greater risk they pose could be in influencing international perceptions of the China-Pakistan Economic and Defence Co-operation (CPEC) project. Pakistan has reportedly spared nothing and no one to ensure that the project is implemented.
The CPEC project aims to pipe gas from Iran through Pakistan’s restive Balochistan and Gilgit-Baltistan regions to China’s western Xinjiang region which, incidentally, is itself not as settled as Beijing would like. To facilitate this project, China is said to be investing around US$46 billion in it. Apart from the welcome energy and economic boost that this would provide, Pakistan sees the project further cementing strategic ties between the two countries. This is especially welcome at a time when the US, until recently a strong ally, is rapidly cutting its ties with Pakistan. In Islamabad’s perception, strong strategic ties with China would enable it to counter arch-rival India. China, moreover, is reported to have agreed to supply Pakistan with modern submarines, which could make India’s task of blockading Karachi port in times of conflict, as India did during its 1971 war with Pakistan, more dangerous.