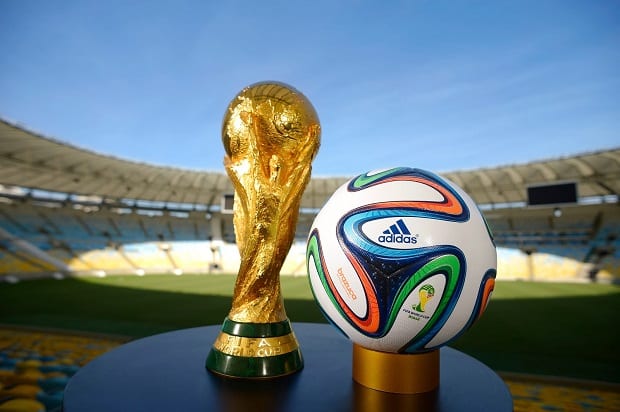 Hope you are getting ready for some late nights. Four weeks of riveting football in the sporting spectacle that is the 2014 FIFA World Cup are upon us, and the so-called global football crises (GFC) will surely be forgotten as some marvellous athletes bring the attention back to the sport.

32 teams will fight it out to be crowned world champions, as a few billion people watch. After contesting six games each in the lead up, the two top teams will contest the finals on July 13th.

Host country Brazil is just as football-mad as India is cricket crazy: no doubt it has huge expectations of its own team. But not if the 2010 winners Spain have anything to do with it. Meanwhile, though Argentina has some wonderful players, it is not the most popular team in the competition and most lovers of the game are hoping, anyone but Argentina! Of course, the English press will go feral if their lads do not bring home the cup, and Germany is always a dangerous opponent. Asian and African teams will be exciting but pose no serious threat. Australia is one of the 32 teams competing but the expectations from the Socceroos are low.

While the teams jostle for the positions on the winning podium, the mess which surrounds the popular sports of football and cricket will be temporarily forgotten.

Sports and corruption seem to have a dangerous nexus. It is tempting by the decision makers, either as players or administrators, to manipulate events to their advantage, as the quantum of monies in sport these days is staggering.

Countries which win the mandate to host these events need to set up infrastructure involving billions of dollars. Besides national prestige, it gives the local politicians an international platform to be recognised.

What needs to be managed is the bidding process, as the football world’s governing body FIFA is discovering after the allegations of corruption were levelled against the winning bid of Qatar for the 2022 FIFA World Cup. Qatar overcame competition from Australia, Japan, South Korea and the United States to be named as 2022 hosts. But the bidding process has been hit by a series of corruption claims. While on one hand British tabloids have led the charge on these allegations, FIFA President Sepp Blatter has accused them of racism and discrimination. It appears that a former FIFA Vice President, a Qatari, helped lobby and paid football officials around the world to secure the bid for his country. But while that might be uncomfortable for Qatar and for FIFA, it is not clear that he, or the bid, broke any of the governing body’s bidding rules.

FIFA executive committee members were not subject to the same restrictions placed on bid officials, while all bidding nations used heads of state and senior government figures to try to win votes. American lawyer Michael Garcia is currently involved in an independent investigation into the bidding process and is due to deliver his report to FIFA after the World cup concludes.

What is clear is that the rules have not been kept up to date with the changes in the management of these sports. With billions at stake, the possibility is there that a delegate’s vote could be influenced. While the global game tends to unite all, the disparity amongst the nations and voting delegates is such that temptations to favour a bid can certainly arise. Perhaps there needs to be a weighting given to delegates’ votes, then committees on technical, economic and social merits of the bid can minimise any bias. Diluting the power of a few can strengthen the future of the game.