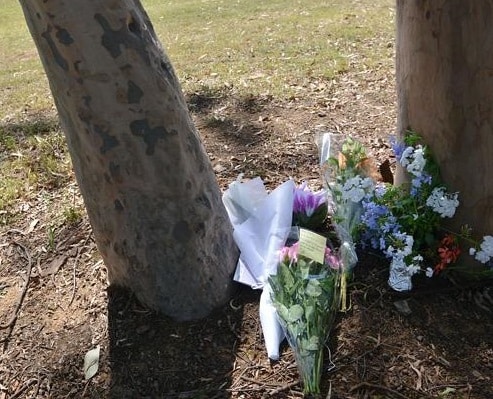 Reading Time: 3 minutesPAWAN LUTHRA and Indian Link propose that the concrete pathway in Parramatta be bestowed with the name ‘Prabha Arun Kumar Walkway’ in tribute to the soul who lost her life

As I retraced Prabha Arun Kumar’s last walk in Parramatta on that fateful Saturday night, the randomness of that horrific attack left me stunned.
It was on this very pathway that the 41-year-old fought off an attacker in the dead of night, finally succumbing to her injuries.
The concrete walkaway that connects Argyle Street to Amos Street, seems to be an easy link for Westmead residents as they make their way back home from Parramatta Station.
On the Saturday afternoon I visited, a group of golfers were teeing off from the adjacent golf course, and the fateful pathway was busy with passers-by as they connected between the two suburbs.
What brought them to a sudden halt and a dose of reality on the sunny afternoon, was the large memorial of flowers under the tree on the side.
Messages on the flowers read RIP Prabha and Your memory will stay with us forever.

The nation was horrified by the brutality of this attack. Prabha Arun Kumar came to Australia just three years ago to work as an IT expert with an Indian IT company. An economic migrant, she left her then six-year-old daughter and husband behind in India as she worked hard to save monies to give herself and family economic security. With dreams of building wealth through her talent and hard work, she is not very different to millions of Indians and thousands who have found their way to Australia. That she was working a double shift on a Saturday was an indication of her work ethic and desire to achieve her goals.
In the aftermath of this tragic incident, issues to note are the swift response from all concerned. The state government, in an election mode, has learned from its disastrous handling of media and public relations after the student riots of 2009. Premier Baird and local member Geoff Lee have taken all steps to assure the community that the police are working hard to bring the perpetuators to justice. They also have assured all that there are no indications that this crime is in any way race related. The local Indian Consul General Sunjay Sudhir has ensured timely exchange of information between his superiors in India and representatives of the local government and law enforcement agencies. The local media, both Indian and mainstream, have also made sure that the information has been released in a timely and accurate fashion.
Wish we could say the same about media in India, though. They tried – and thankfully, failed – to rouse up the same ruckus they did during the Indian students’ crisis.
This newspaper has fielded numerous calls from media outlets in India about the tragic incident. All too often, the first question being asked breathlessly has been, “How safe are you feeling in Australia?”

Moving forward, there is no doubt the perpetuator will be caught and the law will deal with the offender.
We at Indian Link would like to propose that the concrete pathway between Argyle Street and Amos Street, be bestowed with the name ‘Prabha Arun Kumar Walkway’ in tribute to the gentle soul who lost her life here.
We believe this path is currently unnamed, and calling it after Mrs Kumar will be a fitting memorial.
It would be a small gesture indeed for the local and State governments, but would show tremendous support for the local Indian community. At time of going to print the Premier of NSW Mike Baird is fully supportive of the idea as is local MP Geoff Lee. Premier Baird has promised to have this issue discussed with the family of the late Prabha Kumar and then set up the necessary steps to implement this.
Just like her name, Prabha, which is Sanskrit for ‘light’, it would send out a message of protection for regular citizens going about their daily activities, to be able to do so safely and peacefully.