India is fertile ground for disruption 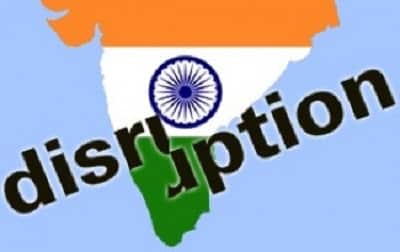 An interesting observation during a recent conversation with a friend started me thinking of the professional work opportunities in India versus those overseas, especially in western countries.
This friend had his children study overseas, not only because he could afford it, but also because he believed in the structured approach which gives the students a wider perspective on issues before settling into a more rigid and defined course. However, he was keen that the children return to India to pursue their corporate careers. The learning curve is steeper in India, he shared; and there’s plenty of disruption taking place.

As a term bandied about in business circles for a few years now, disruption goes beyond innovation. It changes not only how we do business, but also how we think and behave as a society, even intruding on our daily habits in many instances. It is destructive in that it does away with existing paradigms, but it is also much, much more creative.
In India, as the masses break through socio-economic boundaries, a population thus far steeped in tradition is hungry for change. The systems in place are challenged as they scamper to catch up with the fast-paced changes in social and business life. The government agencies are struggling to keep up with expectations, and so there are opportunities aplenty for disruptors to step in and create greater opportunities for themselves and others.
Many organisations are stepping up to the mark in this regard. The private banks and the telcos have moved way ahead of their state controlled counterparts to offer new and innovative products.
In fact, only days ago, India’s richest man Mukesh Ambani laid out his vision for his telecom firm Reliance Jio, offering the world’s cheapest internet data at $1 a gigabyte as compared to about $5 per gigabyte now available. With a country where the market will be in millions of customers, this kind of disruption will revolutionise the industry. One suspects Ambani’s competitors will have their thinking caps on to find similar disruptive options to disrupt this latest offering.

Exciting times indeed.
Meanwhile, for those of us who are more settled in our adoptive homeland, the issue is what kind of positive disruption we make to our professional and personal lifestyles here, especially if the feeling is that the career has plateaued. Will taking up a healthier lifestyle create a disruption to the routine of work, television and social life? Will breaking away from corporate life to start a new business create a professional disruption?
Perhaps it is time to give up ideas to which one has stuck to in the past or skills which we have found comfort in to try something bold and new.
After all, if it is not hurting or being uncomfortable, then one is not disrupting enough and changing enough.