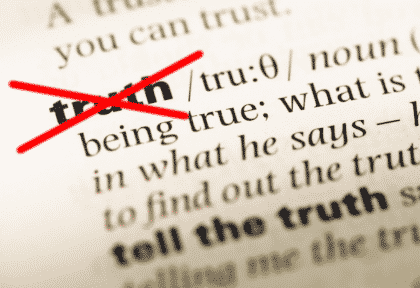 India’s post-truth landscape may be a harbinger of what’s to come for the US and the UK, writes Ranjit Goswami, RK University

Major social change does not happen within the space of a year. Yet, to a large number of observers around the world, the “post-truth” phenomenon seemed to emerge from nowhere in 2016.

Two key events of 2016 shaped our understanding of the post-truth world: one was in June, when Britain voted in favour of leaving the European Union. The other was in November, when political maverick Donald Trump was elected the 45th President of the United States of America. Trump’s administration spent the third day of his presidency speaking of “alternative facts”, and making false claims about the size of the crowds that had attended his inauguration.
For the rest of the world, the importance of both Trump and Brexit can best be gauged by understanding that they happened in the USA and in the UK. The UK was the key driving force of the world from the 19th century until the second world war, the US has been ever since. The US and the UK often have shared a similar point of view on many global geopolitical developments, as strategic allies or by virtue of their “special relationship”.

The mainstream English-language media are largely concentrated in the US and UK, and as such dominate the global news agenda. Had these surprising electoral results happened in any other two nations, the impact of the “post-truth” narrative would surely have been lesser.
Of course, events of such historical importance in quick succession, across the Atlantic, would naturally shake up English-speaking Western intellectuals.
But there is an argument to be made that the US and the UK have been living in denial of facts and evidence for years. In 2003, after all, both the countries went to war in Iraq over the false notion that Saddam Hussein was harbouring weapons of mass destruction.


Post-truth could also mean that a section of the elite in the US and the UK are facing a reality they never expected. When elites are not comfortable with the truth, the term “post-truth” emerges. One who seeks facts from one set of events will face the charge of ignoring evidence from another set of events.
Noam Chomsky and Howard Zinn told us a long time ago that the narrative of the Western mainstream media and politicians do not necessarily represent people’s interests.
The world has largely been influenced by what the US and the UK mainstream media and policy-makers think; what rest of the world thought about truth has always mattered less.

Wake up and smell the post-truth

As years pass by, and as we in the rest of the world have more willingness to accept that the US and the UK did not help bring peace or stability in Afghanistan, Iraq or many other places, we realise that we have long been living in a post-truth world, where the landscape of reality was largely seen from the perspectives that these powers, in solidarity of the two governments and the elite mainstream media, wanted us to see.
There can surely be an argument that there is no credible uniform narrative echoing from the internally divided US and UK now. For the US, even the relationship with old foes, such as Russia, is no longer clear.
An increase in partisanship in the US has seen stark divisions arise, with intelligence agencies and the mainstream media on one side, and the alternate media siding with organisations such as WikiLeaks on the other, often sharing narratives emerging from Kremlin-funded media outlets such as RT. Barack Obama and Hillary Clinton belong to the former club; Donald Trump, as of now, to the latter – driven by convenience.
Binary pictures always failed to represent real-life complexity, some of us have suddenly woken up to realise it.

That was the global context of post-truth politics and its advent in the West. But as the US and UK wake up to this new era, it’s worth noting that the world’s largest democracy has been living in a post-truth world for years.
From education to health care and the economy, particularly its slavish obsession with GDP, India can be considered a world leader in post-truth politics.
India’s post-truth era cannot be traced to a single year – its complexities go back generations. But the election of Narendra Modi in 2014 can be marked as a significant inflection point. Ever since, the country has existed under majoritarian rule with widely reported discrimination against minorities.
India’s version of post-truth is different to its Western counterparts due to the country’s socioeconomic status; its per capita nominal income is less than 3% of that of the US (or 4% of that of the UK). Still, post-truth is everywhere in India.
It can be seen in our booming Wall Street but failing main streets, our teacher-less schools and our infrastructure-less villages. We have the ability to influence the world without enjoying good governance or a basic living conditions for so many at home.
Modi’s government has shown how key decisions can be completely divorced from the everyday lives of Indian citizens, but spun to seem like they have been made for their benefit. Nowhere is this more evident than with India’s latest demonetisation drive, which plunged the country into crisis, against the advice of its central bank, and hit poorest people the hardest.


Despite the levels of extreme poverty in India, when it comes to social development, the cult of growth dominates over the development agenda, a trend that Modi has exacerbated, but that started with past governments.
The dichotomy of India’s current post-truth experience was nicely summed up by Arun Shourie, an influential former minister from Modi’s own party. He disagrees with the prime minister, just as many Republicans share sharp differences of opinion with President Trump.
Shourie said the policies of the current administration were equal to his predecessors’ policies, plus a cow.

India’s post-truth landscape may be a harbinger of what’s to come for the US and the UK. Certainly, there are echoes in both nations of the nationalism narrative that swept Modi to power in 2014.
Each nation and each society has its individual interpretation of the post-truth political world and its impact on the social and economic landscape. Back in 2012, Justice Anthony M Kennedy, in scrutinising former president Barrack Obama’s health-care reform said, “most questions in life are matters of degree.”
And so it is with post-truth politics. We have always lived in some form of the post-truth era, to varying degrees. But if this current manifestation of the phenomenon is a response to the fact that too much “political correctness” or “identity politics” did not go well with the majority in either India or the US and the UK, too much protectionism is also likely to have devastating consequences.
In any democratic society, the pendulum of public opinion swings from one pole to another. In the US and the UK, as in India, we are now seeing the pendulum swing to a populist, or post-truth extreme.
For all three countries, the assumption is that as the pendulum swings more in one direction, the invisible forces of democracy will eventually work to bring balance, which will lead to a swing in the opposite direction.
But that also assumes that no untoward large-scale irreversible damage is done to the world in between swings. And yes, that is a big assumption, given where the world stands now.
Ranjit Goswami, Vice-Chancelllor, RK University
This article was originally published on The Conversation. Read the original article.