Rudd and the India-Oz relationship 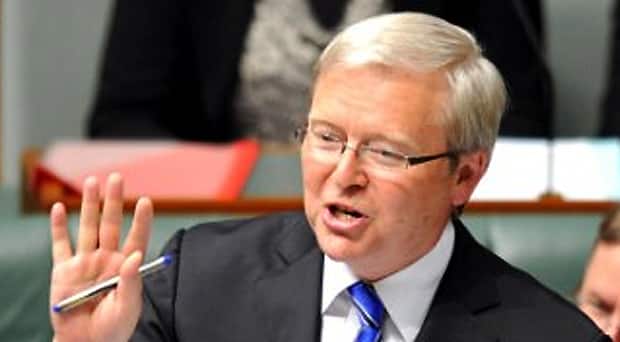 A high-ranking Indian diplomat often expressed his exasperation with Prime Minister Kevin Rudd in his first term of office, as to his leanings towards China. The sentiment in South Hall was that under Rudd, the Australia-China relationship was a bit more warm and cosy than it needed to be. India was frustrated at the way the Labor Party under Kevin Rudd rebuffed India’s diplomats, especially in the area of uranium sales. In the dying days of the Howard government, it was announced that should the Coalition return to power, they will initiate steps to sell uranium to India. However, with Labor taking control in 2007, in his first stint at prime ministership Kevin Rudd made no moves to progress any discussion on this topic; in fact, it was put on the back burner.
It was under the next prime minister Julia Gillard, that the Labor caucus endorsed the sale of the precious yellow cake to India. Interestingly enough, this decision seemingly was undertaken without consulting her then Foreign Minister Rudd, who was only informed of this after it was publicly announced. This decision was made in December 2011 and to date little progress has been made in practical terms. One expects that under the reincarnation of Kevin Rudd as Prime Minister, not much will happen in this regard. Interestingly, Rudd supporters, such as current Deputy Prime Minister Anthony Albanese and Labor stalwart Doug Cameron, both disagreed with the then PM Gillard’s decision. 2008-2009 was the period when the students’ crisis had rocked the relations between India and Australia. An enduring image from the time is that of Rudd’s effigy being burnt by demonstrators outside the Australian High Commission in India. While this was certainly not pleasant, it further distanced Kevin Rudd from all things Indian.
As to how the Indian community in Australia reacts to change of leadership at the Labor Party will be interesting to observe. Over the past few months, there has been a concerted effort by the subcontinent friends of Labor to reach out to the Indians in Australia. Former PM Gillard’s visit to the Parklea gurudwara, a meet-and-greet with selected media at Kirribilli House, weekend fundraisers for the Labor Party within the Indian community and the constant parade of Labor’s marginal seat politicians at Indian functions, have showed the importance given to the Indian vote at the next elections. Whether the new (or old?) Prime Minister Rudd will embark on similar gimmicks will be interesting to observe.
However, if history is any indication, PM Rudd will prefer to practice his Mandarin at local Chinese functions, rather than covet the Indian vote. Australian Indians will also remember promises and grandiose statements such as the 20/20 forums, grocery watch, fuel watch, the lack of coherent policy on ‘the greatest moral challenge of our times’ and carbon tax, the dismantling of the Pacific solution of the Howard government, the near breakdown in the working of the government after disagreements in the kitchen cabinet etc. While all these can be forgiven, what the Australian Indian community will be watching, is how the relationship between India and Australia progresses under a reincarnated Kevin Rudd.