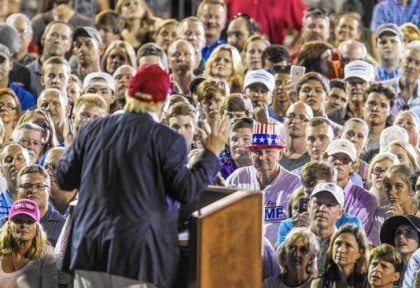 Like many others, I viewed Donald Trump’s victory over Hillary Clinton in the 2016 US presidential election as a triumph of hatred over hope; of ignorance over experience; of brawn over brains. Even as the Democratic Party began their investigations into how, so too did so many of us wonder: why? Struggling and refusing to comprehend why more than 60 million Americans chose to give their vote to a bigoted, racist and homophobic misogynist, I inadvertently convinced myself that accepting Trump’s presidency is an important step – if only to ensure that similar divisions, already prevalent in Australia, do not lead to a populist movement as devastating as Trump’s.

As anti-Trump protests began to formulate across the US in the moments after his historic victory, you could be forgiven for gleaning a macabre satisfaction in knowing that Trump would not enjoy a peaceful transition into power. Given the obstacles placed in Obama’s path by an immovable and irrational GOP during his eight-year tenure, it seemed only appropriate that Trump’s detractors vowed to give him a similarly difficult experience in the Oval Office.
However, before indulging in that particular schadenfreude, stepping outside the political spheres which constrain our views and ideologies – whether on the left or on the right of the spectrum – is a critical exercise.
It is difficult to separate Trump’s comic book supervillain personality from that of his supporters; politicians are, by their very nature, supposed to be representative of the citizens whose votes they seek. For those reasons, Trump supporters have, over the course of what has seemed like an endless campaign, been labelled as racist, sexist, uneducated, idiotic – take your pick. But hindsight will tell us that insulting a large segment of the population and, in turn, asking for their vote (or assuming that their votes will be inconsequential) is hardly an effective strategy.
It is too tempting – particularly as a progressive – to assume that there is an inherent malice in the Trump movement. However, we must recognise a critical fact: although 60 million Americans may have voted for Trump, it does not mean that those 60 million Americans are bigots. By failing to reach out to what turned out to be an incredibly large group of disillusioned Americans, Clinton forced their hand; and they showed up in record numbers on election day.

It may be simplistic and idyllic, but the first step towards healing the devastating division which grips the USA must be empathy – on both sides. The prevailing misconception is that there are no moderates on either side of the political spectrum. If you are a Democrat, you are a part of the elitist establishment that is too corrupt to see past its own excesses; if you are a Republican, you are a gun-toting, confederate flag-wielding redneck who is threatened by the prevalence of minorities.
The reality is starkly different. I spoke with a young Trump voter, with largely progressive views on marriage equality and medicinal marijuana, who patiently explained the class divisions and disenfranchisement that led to Trump’s victory, yet recognised the inherently bad person that is Trump. Similarly, I spoke with an older Democrat whose response to Trump’s election was not of anger and outrage; but of her hopes for reconciliation and unity.

The path towards unity is unclear, but without question, Trump must first reach out to the minorities he has marginalised, victimised and promised to persecute. He must unreservedly denounce the attacks and incidents of racism against minorities which have reportedly increased since his victory. His victory speech was a promising start, albeit misguidedly so; although the markets skyrocketed following the first moderate Trump speech in recent memory, the danger in Trump lies in his unpredictability. Will he be as measured and reasonable in his response when an event occurs for which there is no written script? Only time will tell.
The Democratic Party – and its supporters (many of whom are now themselves, disenchanted by the turmoil within the party) – must commence the process of acceptance by setting aside their anger. Largely peaceful protests continue to take place across the United States, and their motivation is understandable; after all, Clinton won the popular vote, reflecting a widespread rejection of Trump’s fitness to lead the country. However, the protests are unlikely to lead to any meaningful change; the Democratic Party must begin to recognise and understand the disenchantment that characterises the lives of so many Americans, and prepare a long-term, grassroots strategy for their re-engagement.
Meritocracy is unfortunately a myth; it is time to accept that Trump is the President-elect, and put aside the hair-trigger responses which serve to deepen a catastrophic schism that needs no more assistance. When President Obama was inaugurated in 2008, the overwhelming message was one of hope. Meanwhile, Trump’s campaign in 2016 has been filled with fear, anger and hatred. However, Trump’s supporters themselves do still carry hope – and in its pursuit, both sides must reach out to each other to begin the long and painful process of healing a country devastated by social divisions.