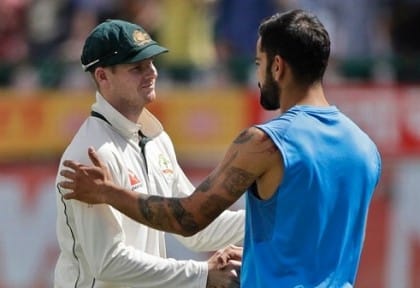 On the eve of the conclusion of one of the most enduringly captivating sporting contests in the past decade – a series of Test cricket which captured the attention of cricket fans around the world – the online edition of one of Australia’s leading newspapers featured as its top story a piece with the headline: “Thrilling final test marred by allegations of cheating”.
“Allegations of cheating” is in itself a misnomer, arising only from a lip-read of an inadvertent and, originally, private two-word outburst by Australian captain Steve Smith. So irrelevant was the incident in the context of the series, that the headline was changed after less than an hour, and the incident since forgotten.

But it was a revealing lapse; the series that Test cricket had been crying out for, a likely seminal battle between the world’s top-two ranked nations, was as its root, merely an opportunity for the Australian sports media to scratch out another cringe-worthy chapter in its long-running war against positivity.
It has long been acknowledged that the Australian cricket media loves to create monsters – in recent times, think Stuart Broad, Faf du Plessis, Virat Kohli. The common element underlying the three is their combative nature; they are not afraid to give back as well as they take, and against Australia, they certainly take. Yet the Australian media – and the journalists, producers and critics of which it is comprised – knows how to appeal to the base instincts of sports fans by creating controversy and inciting hatred.

Recently, this columnist had a revealing conversation with the individuals behind a popular Australian cricket website and social media hub. Lamenting the clickbait nature of the articles and the intentionally incendiary nature of the posts, the administrators of the site grinned sheepishly. “We hate it too,” they said. “But it works”.
And herein lies the crux of the issue: media is a multi-billion dollar business, and if posts on social media garner attention, advertisers will flock. Unfortunately, social media is also the home of sensationalism: “traction” is critical, and in a fast-paced online world, there is no time to vet real-time information. Instead, content producers rely on yellow journalism: eye-catching headlines with little or no legitimate, well-researched news. It is a bid to pit fans against each other – and one suspects, the players, too. Some popular international cricket social media pages have become a cesspool of racism, vilification and online bullying – propagated by fans from both sides of the fence.

It is far beyond traditional sports banter, and difficult to imagine that such a descent would have occurred if reporting was not so unabatingly inflammatory. Evidence lies in the relatively sanguine comments by fans on posts by ESPNCricinfo, for instance, which has maintained its journalistic integrity and steered clear of posting attention-grabbing headlines with little to no substance underpinning them.
Other media outlets were not so measured. On the website of a leading Australian sports broadcaster, one particular journalist dealt exclusively in vitriol, singling out the Indian captain Kohli and the BCCI for criticism with no refrain. The writer’s lack of awareness of the intricacies of Test cricket – the stories which deserve to be told in the unique milieu of the five days which make up a Test match – was matched only by his aversion to factual information. Instead, his modus operandi was the regurgitation of over-used and unfounded conspiracy theories – for instance, suggesting that the ICC is unable to sanction Indian cricketers due to the BCCI’s influence on the game.

Ahead of the third Test in Ranchi, the journalist went on to state that “the reputation and integrity of Indian cricket is on the brink of complete embarrassment” based on his ill-informed assessment of the Ranchi pitch. Hindsight will show that the pitch proved to be fine. There was no retraction.
At one point, this journalist even went as far as to compare Virat Kohli with Donald Trump, noting with no sense of irony that “Just like President Trump, Kohli decided to blame the media as a means of trying to hide the egg smeared right across his face.” Ironic, because by the end of it, his media outlet had given up on reporting facts altogether, its Facebook page declaring that Steve Smith was the Man of the Series (he wasn’t). Again, there was no retraction.

Bias in sports media is almost universal. The Indian media contingent is just as guilty of inherent bias as its Australian and English counterparts. Sensationalism, too, is a concept with which India’s raving 24/7 news channels are all too familiar. But perpetually negative sensationalism is a craft in which the Australian sports media is unparalleled.
Whether against its own players or the opposition, the preference is to divert the gaze from achievements, act as a flame for the ignorant moth, and wave a red flag in front of raging online bulls. It would be an inconsequential approach, if the media did not play a tangible role in the relationship between Australian and Indian nationals. But it does.

The era of great Australian cricket columnists is all but at an end – since the sad demise of the erudite Peter Roebuck and the winding-down of the eloquent Mike Coward, there has been a noticeable dearth in reasoned scribes.
This is not to say the talent is not there – the analyses of Greg Baum, Malcolm Knox and Peter Lalor are thoughtful, measured, and well-researched – and importantly, they are about the game. But they are few and far between.
In the age of clickbait, sensationalism and instant gratification, Australian sports media’s integrity is certainly at its lowest ebb.