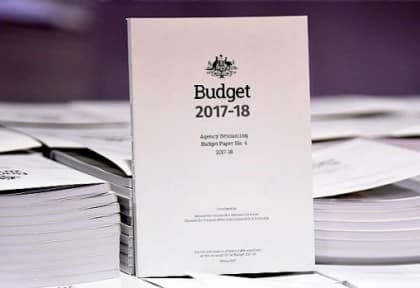 Some six hours prior to the Treasurer’s presentation of the Budget each year, invited media gather within the Parliament in what is called a “lock-up”. Here, they are given access to the Budget papers which they can scrutinise, so that their analysis can be presented to the public at the earliest after 7.30pm.
This year, attending the lock-up, was yours truly, on behalf of Indian Link.

Yes, it was well and truly a lock-up, as no information can be leaked prior to the designated time.
The assembled journos, all the heavy hitters from the mainstream media – among them Barrie Cassidy, Leigh Sales, Michael Rowland and Sabra Lane from the ABC, David Spears from Sky News, David Koch from Channel 7 – were poring over the budget papers.
Comments and opinions were being shared on the proposal to increase the Medicare levy, the funding of the NDIS, and using superannuation for first home buyers, but factors effecting the migrant community were not really the focus of any discussion.
The three areas which directly affect the migrant community are the proposed changes to aged pension and disability support pension entitlements, the increased levy for employers nominating workers for temporary and permanent visas, and the cost of temporary sponsored parent visas from November 2017.

For eligibility to receive any aged pension, the period of stay in Australia has increased from 10 to 15 years. This obviously will have the greatest impact on migrant families (and their elders) who have now migrated to Australia. One might consider that 10 years is a long time before migrants are eligible for any entitlements; adding a further 50% to this is excessive for families who will have additional responsibilities for longer.
At the same time, one of the promises made during the last election by the Coalition was to make available temporary sponsored parent visas. This has been delivered, but at a cost. The new proposed parent visa will allow migrants to pay $5,000 for a three-year visa for their parents, $10,000 for a five-year visa and $20,000 for a ten-year visa.
An estimated 15,000 places will be made available annually and this will bring in millions of dollars for the government. And yes, the sponsor of the parents’ visa will continue to shoulder all legal responsibility for the health care of their temporary migrant parents.

For Australian businesses, especially those who rely on skilled migration of workers, a levy is being imposed on employers who employ workers on temporary and permanent visas. For example, a local Indian restaurant who needs to bring in a chef specialising in Indian cuisine will need to pay a fixed dollar amount of $1,200 to $1,800 per annum for a temporary employee.
A permanent employee skilled levy can range between $3,000 and $5,000. While this is largely being done to encourage local employment, there are areas such as aged care, hospitality and IT industries where an Indian Australian employer will have to bear these additional costs.
One budget measure which does help the migrant community is the encouragement to salary sacrifice pre-tax dollars to superannuation (up to $15,000 pa) and then have access to some of the monies to use a deposit for the family home.

Though the maximum amount of $30,000 to be so accumulated may seem to be on the lower side in cities such as Sydney and Melbourne, where the cost of living is high, between a couple, having access to $60,000 invested in superannuation, earnings of which are taxed at only 15% will certainly help in saving monies for the family home.
On the whole, the budget does add a cost by increasing the Medicare levy of 0.5% across all tax paying migrants, and in the current environment of minimal wage increase, this seems to be a price to be paid for budget repair and to get the budget on a path for surplus in four years’ time, as the Treasurer Scott Morrison says.