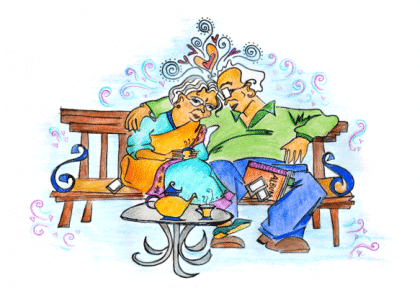 APARNA BALAKUMAR has a long hard think about happily ever after

My thatha sways back and forth, perched on his rocking chair out the front of his home in Chennai. At 82-years-young, the oasis he has built in the middle of sticky South India remains his favourite corner of the world. My paati sets a steaming hot cup of filter coffee by his side. He nods in acknowledgement and she takes a seat beside him. They ponder the universe in silence; continuing a story that’s been in the works for over half a century now.


I have just turned twenty: the same age my paati was when she had an ‘arranged marriage’ to a man ten years her senior. At the time I am learning how to manage my own laundry and finances, my paati was learning how to manage an entire household. It was 1964 when her parents asked her how she felt about a man who would soon become her world.
It seemed a solid match. They were raised with complementary value systems: both Hindu, similarly educated, and pure vegetarians. All the enquiries her parents made about his family checked out positively. But beyond that they shared similar interests and life goals; not yet so stuck in their ways that they could not accommodate for the other. And while my paati blushes recounting the day’s events, she can’t help but let slip that he “looked very handsome” too.
A wedding date was set. Vows were exchanged. A home was bought.
Then, they fell in love.
This timeline often perplexed me. How could you take such a leap of faith without having exchanged words with this man, I’d interrogate? Where were the grand gestures? The elaborate proposal? The butterflies in your stomach before each date?
My insistence in trying to box my paati into a caricature of a woman ‘forced’ into a marriage by those around her was founded in a narrow perception of love – one I’d unintentionally subscribed to. In Australia, where dating and courtship was the norm, there was so much negativity and shame behind the words ‘arranged marriage’ that I pretended it wasn’t part of my family’s history. When peers would mention how ‘cute’ my grandparents were together or ask how they met, I would always change the topic.
Every time I stayed silent, I diminished their love story just because it hadn’t played out like any of mine. When I berated my paati for bringing my thatha his coffee when he was perfectly capable of making it himself, I underestimated the autonomy she had within their relationship. When I asked her if she regretted not pursuing her singing career for the sake of raising a family, I assumed her marriage was the beginning of the end, rather than her finest accomplishment. Why? Just because it didn’t fit into the Western narrative I had bought into, telling me how ‘true love’ should begin? Because they didn’t follow the ‘right’ path, the ‘white’ path, the ‘expected’ order of events?
I forgot that she could say no.
The first time I listened instead of shutting her down, my paati explained that ‘arranged’ and ‘forced’ marriages are worlds apart. One involved family putting forward suggestions, while the other was imposed. The ball was always in her court as much as any suitor’s, she said. If she didn’t feel sparks, her parents would ask no questions. Long-term compatibility was the priority, not rugged good looks and charm. She wanted to be sure she could effortlessly slip into her new household with minimal hiccups; acutely aware her marriage was a pairing of families as much as it was a union she was solely entering into.
The (un)likely pairing worked. Fifty-two years in and they cannot function without the other; so intertwined are their beings. They drive each other mad, but are each other’s fiercest supporters. She stays up worrying his sharp tongue will get him in trouble. He is front and centre in the audience at all her concerts. Recently, they renewed their vows.
This article first appeared in Honi Soit the weekly student newspaper of the University of Sydney, Australia.
- Advertisement -
Share
WhatsApp
Facebook
Twitter
Linkedin
Previous articleTelstra hosts global launch of Pixel, phone by Google
Next articleDialogue with nature