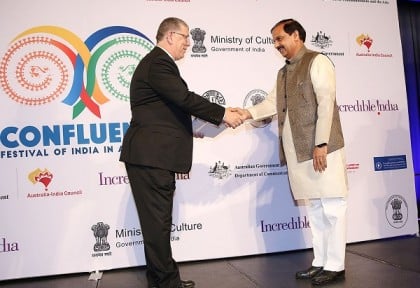 For India to extend its soft power in Australia, the groundwork has been laid with Confluence, but a vision of continuity needs to be developed

The journey of engaging Australia with all things Indian has begun. Confluence: A Festival of India in Australia promised to enthral audiences, foster collaborations and create cultural bonds like never before. Now, half way through the Festival, while the groundwork to engage the local Australian community has been laid, a vision of continuity needs to be developed.

India always falls into the ‘too hard basket’ category for the average Australian punter. Yes, they know of the love for cricket, Bollywood and butter chicken, but beyond that the knowledge of India is scant. All too often the stories which hit the headlines here are those of corruption, graft, oppression of women and rape.

The “good” stories from India, such as the scientific advances, the economic growth, or the general upliftment of the middle classes, are seldom, if ever, reflected in Australia’s mainstream media. Remember the hysteria around the Delhi Commonwealth Games in 2010? The headlines screamed security problems, bridges collapsing, stray dogs and fear of rabies. In the end, the successful conduct of the Games was ignored by all.
The Indian diplomats who are in charge of telling the positive side of the stories do a good job, but often they are preaching to the converted and to the same audiences. And so, to get more headlines about things Indian, a soft power push through arts and culture is an admirable initiative.

The Indian shows currently taking place across Australia are a cultural delight. Be it Sonam Kalra’s Sufi Gospel Project, Nrityagram’s productions, the Indian adaptation of Shakespeare, or the fusion of Indian and Australian music and dance, this by far was the highest calibre of India-centric shows presented within a space of seven days in Sydney. The Indian Australian audiences lapped it up, but what was disappointing to note was the low turnout of mainstream Australians in the audiences. They missed out on a chance to get acquainted with the rich tapestry of art and culture of India, in a beautifully curated and well-executed festival.

To Indian Australians, selecting the shows to attend was to let a young kid loose in a candy store – so many options to choose from. Yet for local Australians, it looked as though the language barrier, for instance in Piya Berupia (Twelfth Night), was difficult to look beyond, or that Raghu Dixit’s infectious energy was lost. Perhaps the selection of the shows needed to be more driven to surpass these barriers of language. The annual Sydney Festival often brings in Indian shows, such as Manganiyar Seduction or William Dalrymple’s Nine Lives, which play to packed Australian audiences. Marketing needed to play a role to better explain the performances; it was unfortunate that some of the best shows from contemporary India were not seen by more of the target audiences.
For those who attended, the shows were indeed a treat, and all kudos to those who conceived and executed. The challenge is now though, is there a vision for continuity? For India to extend its soft power in this country, it is important to have an ongoing involvement of the various government agencies in both countries to make this a regular feature.