HE SAVED HIMSELF FOR US!
Meera Joshi

If you’ve been to our restaurants Tellicherry or Nilgiri’s in Sydney’s lower
North Shore, you probably know that both my husband Ajoy and I love Ganesha – he’s
all over the place! We’ve inherited our love for Ganesha from my dad in Bangalore, an
avid Ganesha collector; he is said to have the largest private collection in the country.
One of our prized Ganeshas is originally from Kerala, apparently. He sits on a lion. Of
course there’s a story behind him.

We first saw him, a big fellow, years ago at a shop in Willoughby where we lived. We fell in 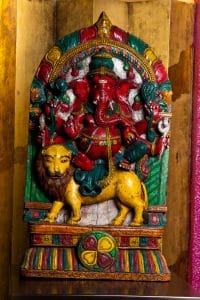 love immediately, but he was priced at $2000 which we could not afford then. We would often saunter in on weekends, just to look at him. No one seemed to be interested in him, because the price began to drop gradually. Finally he was down to $800. Within reach probably, we thought. But hang on, where did the shop go? It vanished, all of a sudden. We were very disappointed. Hamare naseeb mein nahin tha (not destined for us), we reckoned, but could not forget him. One day while on our regular shopping spree in Surry Hills, we saw a shop with Indian-looking artefacts. It was the same guy – I was forced to move here, he told us. I asked him immediately, any chance you have a Ganesha statue, about this big… Why, yes, he said. And there he was. After all these months, I wasn’t going to look at the price tag. I brought the credit card out in a flash.

The first time I saw a Tanjore painting was in Chennai about 25 years ago. I had gone to meet my fiancé Arvind’s family for the first time. Besides the excitement of meeting them, I also had one test to pass – their approval. I was nervous…who would not be? Arvind’s uncle’s home in Chennai is like a tribute to art and music. Beautiful paintings adorn the walls, crystalware gleams in the light, music gently wafts into your ears and every little object has a story behind it, no matter which part of the world it comes from. The walls of
the house were adorned with Tanjore paintings, mostly about Lord Krishna. Some of them were as old as 60 years. 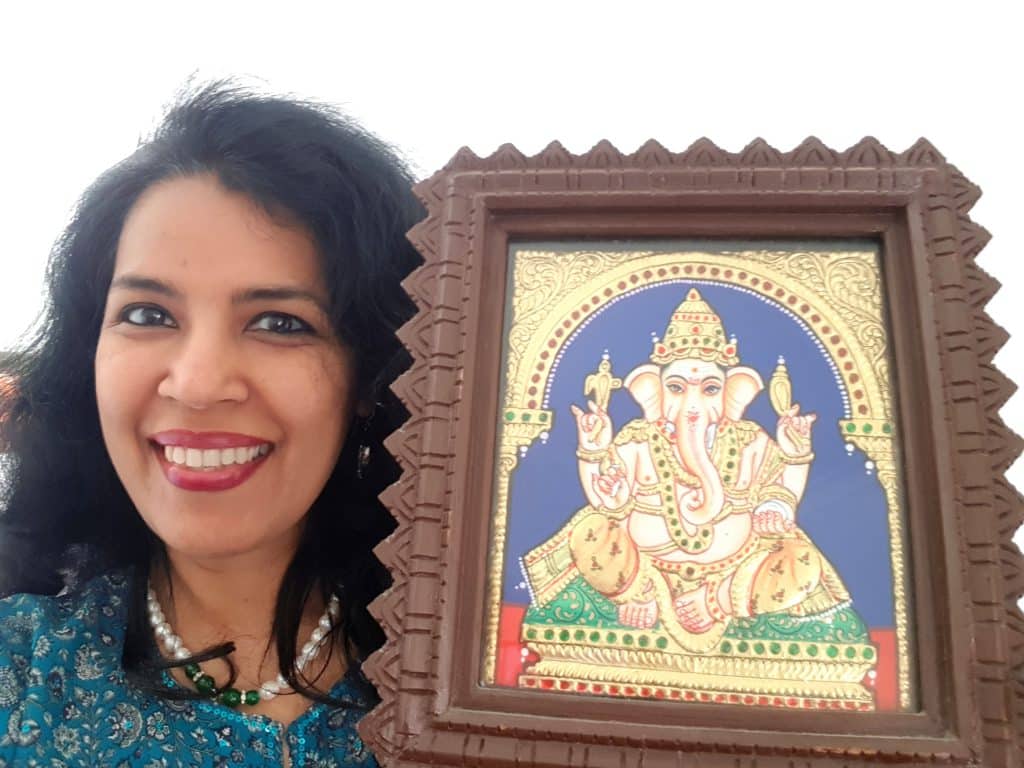 One particular painting caught my eye – a beautiful Ganesha. I had never seen deities embossed with gold and jewels. The uniqueness of the painting was its extraordinary gold  leaf work, attractive jewellery with red and green stones, dazzling colour design and a beautiful carved wooden frame. That meeting went off really well, and I won the family’s approval too. But I came back wanting something. I know I made a wish that day. I wanted a Tanjore painting – a Ganesha with an ornate frame. Somehow I never went
back to Chennai after that. In between all these years my mother-in-law got me a Tanjore painting every Diwali – Saraswati, Krishna and Hanuman. But no Ganesha. I was told
that only a few select artisans make them, one of these being Surya, the artist who makes them for my in-laws. Surya has been painting painstakingly all his life, and can be located in Chennai’s Adiyar area even today. Ten years ago, when on a visit to Australia my in-laws brought me an unexpected surprise. I opened the wrapper of a big package. In my hands was this beautiful Tanjore painting. Of a Ganesha! It was made
by the very humble Surya whose family tradition is making these paintings that are so unique and priceless. Finally I had my wish come true after so many years. I was over the moon and I am still showing it off to all.

I would like to credit my husband for instilling in me the passion for collecting Ganeshas and Budhhas. Big, medium, small… pricey (of course, within means) or not so pricey, we do love adding them to our home. My husband got his first Ganesha when he began his first job after finishing uni. His parents visited from Nepal, and he asked them to bring him a Ganesha statue. 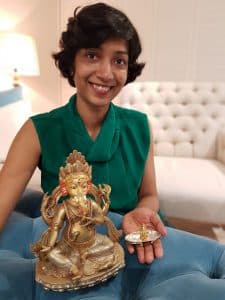 A few years later he brought me to Sydney as his bride. Guess who greeted me when I first entered our home? The very same Ganesha sitting in a glass shelf facing the door. He looked radiant, and I fell in love with him instantly, even though I thought he looked
different. And our conversation at home began with me asking him about this striking piece: in retrospect, it was a great ‘new beginning’. This particular Ganesha is from Nepal with a distinctive physiognomy, very characteristic of the Nepalese sculptural tradition
– long languid eyes and a wider face. It was handmade using ‘panchadhatu’ (the five metals copper, bronze, brass, silver and gold) and the face gilded with 24-carat gold.
The next thing I did was open my luggage and bring out my own ‘cutie pie’ gold Ganesha, given to me by my mum. I placed him right next to my ‘international’ Ganesha!

In 2001, we got an opportunity at Indian Link newspaper to interview a leading Indian artist Milon Mukherjee. Milon had been invited by a North Sydney-based art gallery to live and work in Australia for three months. He was interviewed at his studios in Ettalong, north of Sydney. The article on him that appeared in the newspaper, carried a photo of him sitting on Ettalong Beach, working on his painting of Ganesha, in the open air. I found the half-finished painting quite intriguing. 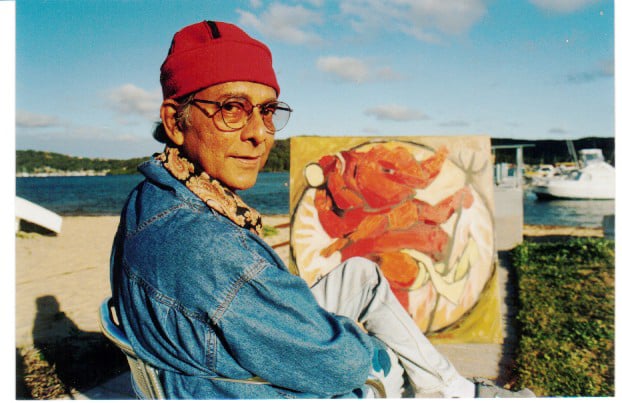 A few days later, I went to the opening of the exhibition. It was the Ganesha I wanted most to see. There it was, now properly finished. Nata Ganesha (Dancing Ganesha), it was labelled. It depicted Ganesha as I had never seen him before – dancing. Dancing the Tandav, apparently, imitating his father Shiva, who danced the Dance of Destruction. By
imitating his father, Ganesha was being ‘naughty’, so the painting was re-titled Nata (Naughty) Ganesha, in a wonderful play on words. I loved the spinning off from tradition.
I wondered aloud if I could take it home. “Seen the price tag?” my husband asked. Oops.

I revisited on two more occasions during the course of the exhibition. Both times, I was secretly relieved to see that no red dot (ie, ‘sold’ sign) had been placed beside ‘my’ Ganesha. The exhibition ended. My birthday came around shortly. “I hope you like your birthday surprise,” my husband said. “Loved it,” I said, thinking he referred to the surprise party he had organised for me the night before. “You haven’t seen it yet. The kids and I
got you something.” Naughty Ganesha now dances on the wall of my formal room.

Ganesh idol sat forlorn in a corner, almost as if it wasn’t pretty enough to be displayed. To be fair, it certainly was unconventional: it had none of the traditional fair skin, fine features and intricate ornaments that Ganesh idols usually have. It was brown – the colour of the clay it was made of – and unadorned, save for a few strokes of paint to define its facial features. To me and my wife, Reeti – who loves environmentally-friendly everything – it made perfect sense to buy Brown Ganesh.

This was years ago when awareness was just starting to grow about how idols made from
Plaster of Paris (PoP) and toxic paint ended up choking lakes and destroying fragile aquatic life. Of course, PoP idols could be mass produced, were sturdier, easier to carry and offered a much smoother texture for paint to be applied for an attractive, more saleable finish. Convenience and commerce had again led traditions astray. Traditionally, the idol was supposed to be made with clay and immersed in a well or lake, where it would dissolve into the water. Many people use the clay from their garden to make the idol and, at the end of Ganeshotsav, immerse it in a bucket where it would dissolve and be returned to the garden. This self-same clay would probably be used again to make idols and be returned at the end of the festival – a symbol of the circle of life itself. We fell in love with our Brown Ganesh in the corner: unvarnished, basic and as natural as could be. We brought him home and installed him with the usual fanfare. Of course, its brown colour was a sure-fire conversation starter with all those who visited our home for ‘darshan’. It gave us opportunity after opportunity to talk about eco-friendly idols. 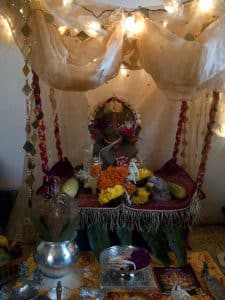 I am sure we convinced more than a few people to switch over to clay Ganesh idols. Reeti, however, went a step further. During the installation ceremony of Ganesh, a betel nut is also installed to symbolise Ganesh. The betel nut is immersed along with the main idol. Reeti asked the priest if we could do without immersing Brown Ganesh and reusing it. The priest, after hearing Reeti’s rationale, said yes, as long as we immersed the betel nut each year, we could indeed reuse the idol for three years. (Some technical/religious loophole, I guess!) So, for the next two years, after each Ganesh festival, we would immerse the betel nut – the symbolic Ganesh – in our well. We would simply keep Brown Ganesh carefully wrapped up in a cloth for the rest of the year. Then, at the end of three years, we bid Brown Ganesh goodbye. We immersed him in a bucket, where He became one with the water in no time. We tipped the bucket in our garden full of flowering trees. Earth to earth.
Brown Ganesh was back where He came from.

India to offer 1,000 PhD fellowships to ASEAN students at IITs