The golden age of Oz 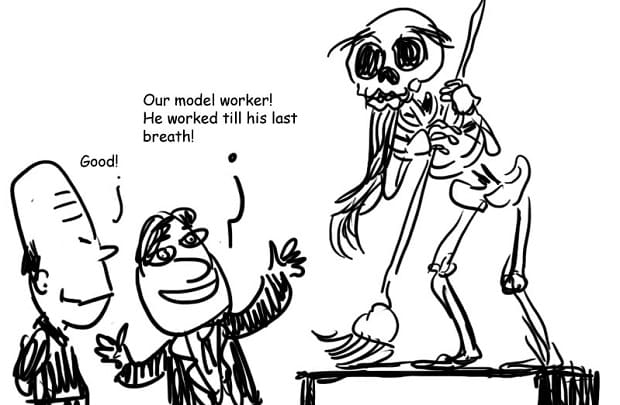 It is the year 2035 AD and Australia is now a Republic.

With the era of entitlement well and truly over, the country is full to the brim with pollies retired on the public purse.

A chosen few are elected every three years by mug punters fervently hoping to be governed better, rather than be bitterly disappointed.

With the old age pension pushed further to seventy, the national scene has taken on a new look.

The car parks at Geelong’s Ford and Adelaide’s Holden factories, that were once crammed with employees’ cars, are now full of their gophers.

The average age of assembly line workers is well past mid-60s. With trembling hands, they continue to assemble wheelchairs made from imported parts, for the mounting aged population.

Some of the workers themselves are in wheelchairs with their carers standing behind them to take them to the next task on the conveyor belt.

With the golden oldies still glued to their jobs, there is growing youth unemployment. So the government decides to implement the carers’ corps.

Friday farewells are the favourite moments for those turning seventy. Those who are a few years inside that milestone wish to grow older soon so they can pass through the pearly gates to pension paradise.

Since purchasing power has shifted to the elderly employed, retailers and boutiques have trained their sights on them.

Advertising gurus are the barometers of emerging trends. They now scout nursing homes for models with furrowed foreheads and crow’s feet for fashion magazines and TV commercials. The weather girl looks well and truly weathered.

OWLS (Old Workers Love Serving) represent mainly white-collar workers and professionals like lawyers and doctors who get better with age and experience.

To please them, the Industries Minister, on return from an Indian study tour, tells them how hard people work in India.

He cites the examples of Amitabh Bachchan and Rajnikanth, who even after turning one hundred, are still working as heroes in Bollywood, dancing with girls and fighting with thugs.

In order to ramp up employment while also facing an election, Prime Minister Gavin Reed orders wheelchair ramps and disabled toilets for every house, whether the resident is an infant or infirm.

In the rush to fix new flushing systems, some shonky operators employ inexperienced youth and as a result houses get flooded. A disaster that can be likened to the pink batt fires two decades ago.

The Opposition leader Sony Ascot promises to bring the boats back, the orange ones used years ago to return the refugees, since smart Sumatran smugglers now use them to ship refugees safely to our shores at a much higher price.

With an eye on votes from fringe groups, ‘green granny’ Rosa Hanson-Old rolls her big, beady eyes, while she opens basket weaving communes to up-skill the unemployed.

Education is now the nation’s primary export earner. Primary students from Shanghai and South Korea stream into our schools to escape their tiger mums and tough maths lessons, preferring the easy Aussie option.

After most of the minerals shipped out, the mines are a mega mirage. A portly coal magnate and politician plans to start Queensland Mirage-type resorts by filling the empty open-cut mines with sea water for tourists to swim and surf.

Some twenty years earlier, the editor of the April 2014 issue of Indian Link, advised young Indian migrants who came in their thousands to plan their financial future carefully since their chance of getting a pension is likened to India winning the Soccer World Cup. His words have become so prophetic.

Those same young migrants, skilled in IT and engineering, are now in their sixties, working as hard as ever plying their old (cleaning) carts in shopping malls and aged care homes.