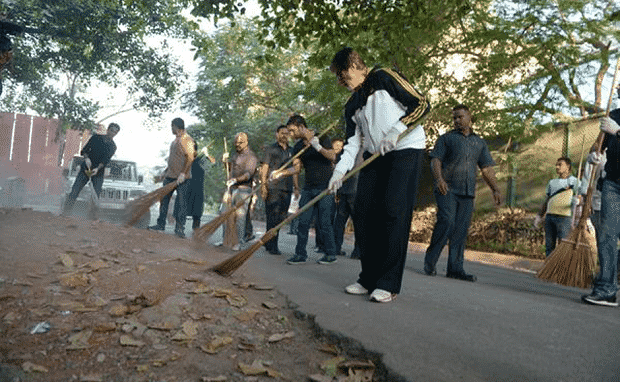 NRIs like myself are often very critical of India. This is not out of malice, but out of concern for the land of our birth.

If, like me, you want to write humour columns for your local community newspaper, no place on earth offers as much scope as India. Indeed it is a veritable mine… perhaps a minefield too.

When I landed in India in early October after nearly 10 years away, the story that was sweeping every media outlet was, yes, ‘sweeping’.

Not by ordinary municipal menials, but by ministers and mandarins. The media was awash with pictures of the top brass wearing suits and crisp saris wielding the desi jhadu. That, for those of you who don’t know, is a reed broom attached to a long pole. So long in some instances, that the tool was hard to handle! But never mind, it was only for photo opportunities following the launch of ‘Swachh Bharat Abhiyan’ (Clean India Campaign) by our newly appointed Prime Minister, Narendra Modi. I wish these department diwans would show similar enthusiasm in cleaning the cobwebs on files with triplicate copies collecting dust on their desks.

Being a man of action like our own Tony Abbott, Modi – after launching the movement at Gandhi’s spotless Rajghat samadhi – did a spot of cleaning himself at a basti of sanitation workers near Rajpath. And whatever he starts, Modi does in mega style, so he named a panel to propagate his program, nine prominent personalities that included the likes of Anil Ambani, Sachin Tendulkar, Priyanka Chopra, Salman Khan, Kamal Hassan, Shashi Tharoor and others.

Now Anil knows how to build a huge pile of cash but not trash; and Priyanka can sway her hips and sing at the same time while sweeping to dodge the drudgery. Sachin can sweep anything to fine leg that is spun in front of him, but what Salman and Kamal can do is not clear to me. Even to perform their stunt acts, they ask for dupes. They leave a trail of trash in their fight scenes. Ah, Salman once waned to clean some Rajasthan forest of some animal ‘deer’ to his heart.

Even before the Swachh movement started, the Kerala unit of the Congress Party moved to sweep its star member, Sashi Tharoor, out for agreeing to be part of a clean campaign, an undiplomatic act by the once high profile UN diplomat.

Modi has stated that his goal is to get the entire nation clean by 2 October, 2019. But my humble opinion is that Modi, being an astute politician, may be thinking of a clean sweep of the Congress and a few other regional parties by the time the next general election comes around, coincidentally in 2019.

Ever since Modi announced his well-intentioned move, I have been paying extra attention to the amount of rubbish lying at every street corner, and notice that every pile is growing by a few inches with each passing day.

If only a time machine were to be set, like the one they had before the dawn of the millennium or the reaching of the seven billion global population mark, it may show how many more tonnes of trash have been added since the campaign started. If all the rubbish from the entire nation of India could somehow be piled up in one place, I suspect it may challenge the height of Everest.

Not wishing to discredit Modi’s noble vision, I dare to say that it may take more than five years, or more than even 50 years, before we will see a modified ‘Clean India’. I hardly notice any change in people’s attitude in nonchalantly dumping rubbish out in the open. Surely this needs a bottom-up and not top-down approach.

Now with pictures of their broom-handling bash archived in albums, Salman and Kamal have gone back to their fight scenes to leave the next trail of trash.

Such is Bharat (to paraphrase a well-known Australian)!