Santa to the rescue 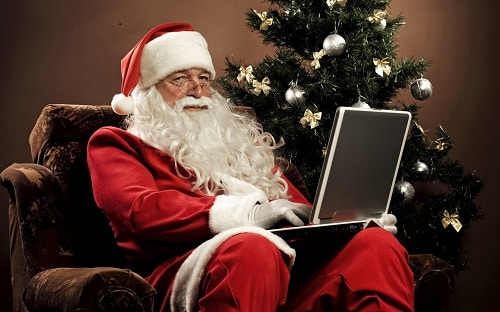 Reading Time: 3 minutesIt’s a weird and wonderful wish list from India this year

Father Christmas is poring over Google Maps on his laptop. He is worried the options for flight paths to take his annual gift giving jaunt to the southern hemisphere are narrowing down. Ukrainian airspace is not safe. Putin backers may not take pot shots at his sled, with Russians turning to Christianity now unlike the Soviet Union commies, but what if one of those rebels mistakes Rudolph for a wild antelope and aims at him?!

The Middle East is muddled up with no one knowing who is shooting at who. PAK seems to stand for Pain and Killing. Even India is a cause for concern. With Maneka Gandhi now in some ministerial saddle, animal activists may protest against his reindeers being used to lug heavy loads of gifts around the globe non-stop. But those avowed cow worshiping Indians hardly look after the beasts, allowing them to choke and die eating plastic bags that litter every lane. There are so many plastic bags strewn all over the land that one day it may look like the snow-covered Arctic.

Anyhow, with a few more days to sort this out, Santa consoles himself. Opening his Internet browser, he is surprised to see on his Facebook someone with a face closely resembling his – with grey hair and beard – plump, but not pot-bellied.

His email reads: “NaMoste Santabahi, I have just returned home after my spectacular visit to Australia. You may have heard the loud roar from Allphones Arena welcoming me. On Indian Link’s website you can see their colourful 30-page coverage of my events. Wherever I went I was treated like a rock star. But on arriving home, I am shocked to see local satraps like Shiv Sena’s Uday demanding a lot more power than they deserve. They think they can tweak this chaiwallah! A month ago I started a ‘Swachh Bharat’ campaign to clean up the country and now I want to use the same technique to sweep some of these ‘chokras’ out of the political landscape as well. Please send me the most powerful broom with the longest handle so that I can do this work from right here in South Bloc. Ap ke seva mein, Narenbhai”.

The strangest request, Santa smiles to himself. He opens the next one. Also from an Indian pollie, Salman Khurshid. “You may not know I was India’s Foreign Minister in the last government. Not many Indians knew that either. Our party bosses Sonia and Rahul are not pulling crowds any longer. I told our newsmen that all those huge crowds for Modi in Myanmar and Australia were because they were sent from here beforehand. Of course no one questioned me on how that was possible. Too many TV channels here in India and they use anything to fill their bulletins. By the way, can you send some huge planes, preferably invisible, to use this technique for ensuring crowds for Rahul next time.”

Very weird indeed. ‘What more is in store?’ wonders Santa as Sonia’s wish list shows up on the screen. Saddened by her request last year for the PM’s chair for her son not being fulfilled, she asks for the best legal brains to fight allegations against her and Rahul for improperly grabbing Rs.1600cr worth of National Herald buildings for the paltry sum of Rs.50 lakh. Alternatively, she wants a Bofors gun, the type that brought Rajiv down from power, to aim at her adversaries making such allegations.

Having barely succeeded in her plea to appeal to the Supreme Court against the judgement of the Bengaluru special court, Jayalalitha, in her note to the jolly old fellow, sounds unusually modest. Setting aside her conceited pride over her proficiency in English, she politely asks for some super silks (QCs) to get her case adjourned for the next 18 years as she did before until the Bengaluru court brought her down to earth.

Proud as a peacock, Subramanian Swamy, cocky over his success in bringing the much-adored Amma to justice, makes the same request – brilliant barristers to bring to books Sonia and Rahul in order to fulfil his lifelong ambition to end the Nehru-Gandhi dynasty.

Plenty of scope for legal eagles to swoop down, feels the man in the red suit.

There is no prize for guessing what Dhoni’s appeal will be – a replay of the last World Cup, even if it means a wait until March to lay his gloved hands on the silverware.

Middle of the road Indians unanimously wish for a ‘jhadoo’ (broom) not only to clean the mounting rubbish on the roadsides, but also to sweep away the chronic corruption. If it happens, it will truly be a be Christmas ‘jadhu’ (miracle).