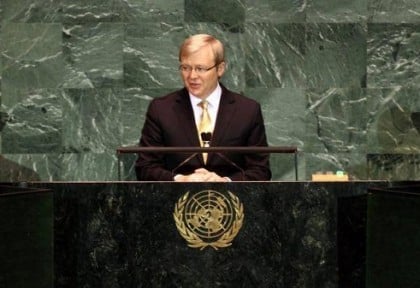 “Hi, my name is KevUN. I am from Queensland. If you don’t know where Queensland is, it is in Australia. If you don’t know where Australia is, it is a cooey from Papua New Guinea. I am here to help… the world.”
With the same introductory lines that proved successful in his Kevin07 election campaign, Mr Rudd begins his address to a large international press conference at a plush New York hotel not far from the UN building. Every major newspaper group from The Washington Post, NY Times, Times London, People’s Daily, The Australian, Sydney Morning Herald, Indian Express, has sent senior foreign affairs editors to cover this event expecting a major announcement.
Kevin Rudd (KR): I have decided to nominate for the position of the next UN Secretary-General. I have asked for Australian Government endorsement.
Peter Hatcher, SMH (PH):  Kevin, but…
KR: Peter, call med KevUN; now the UN is part of my persona.
PH:  But isn’t it the turn of Europe after Africa and Asia for this position?
KR: They all have had a fair suck of the sauce bottle.
“He means ketchup,” mumbles a Yankee journalist.
Every Aussie journalist knows that Rudd doesn’t do anything by half. He dreamt of becoming Australian Prime Minister when he was a junior diplomat at the Beijing embassy years ago and worked towards his goal. Learnt all manner of Chinese things, including mastering Mandarin.

Outside, the number of onlookers is swelling. American TV channels are beaming pictures of this to their audience. Strategists at both the Trump and Clinton campaign headquarters are worried this Oz circus is pushing their own off the local TV screens. One US anchor comments, “Ours is not election. This is an election,” a la Crocodile Dundee.
Back at the press conference, questions and answers are flowing thick and fast. For every single line question, Rudd gives several minutes of reply with his ‘programmed specificity’. One journalist mutters to an Aussie colleague “Does this guy ever stop?”
“That’s what Tony asked during the leaders’ debate in the 2013 election,” our man replies.
Greg Sheridan, The Australian (GS):  Mr Rudd, how confident are you of getting Australia’s endorsement?
KR: Malcolm assured me of his personal support during our many Kirribilli dinner meetings.
GS: (Looking up from a tweet) I just learnt that Malcolm Turnbull has said you are not suitable for the job.
KR: (mumbles a barrage of ‘F’ bombs) Shmucks! Turnbull has become a turncoat.
Jessica Rudd, taking notes of the event for her next book, shows him the tweet.
KR: Sorry guys, gotta zip.
Rudd and his advisers adjourn to his lavish apartment across from the UN where he has been living since he was tossed out by Tony. Just to keep a close watch on the talkfests inside, and also wine and dine diplomats from various countries to garner their votes. It’s luxury living supported by a fat political pension and Therese’s millions.

KR: What’s happened to Australian mateship?! I offered many climate change jobs to Malcolm after he lost his Opposition Leader position.
Adviser John: The climate has changed back home. With a wafer-thin majority, Turnbull doesn’t want to be disLodged himself.
KR: How about I ask China to endorse me? After all, I am the only western leader to understand Chinese minds and Mandarin. I pushed their cause so much that the Liberals once called me ‘the roving ambassador of China’. My girl has married a Beijing boy as well.
Adviser Win Loo Se:  But the Chinese got so upset after you commented on their aggressive intention in a Defence White Paper.
KR: What about India? Our boys help out with their IPL teams.
Adviser Peter Virgo: Remember, as Opposition Leader you vowed to scrap Howard’s proposal to export uranium. That was a bombshell.
KR: I sent aid worth millions to African countries. I will personally call President Joe Mugambe of Urundi.
Dials his mobile. “Your Excellency, I am Kevin from Australia. I need your…”
“Sorry, I am Idi Tumbako, the new President, I have overthrown Mugambe. He is in prison awaiting execution.”
KR: OMG! I don’t want to be secretary-general. I can’t save the world like I saved Australia during the GFC, spending billions. Better to settle down in sunny Queensland.
A local Liberal: Thank heavens. He racked up billions of dollars’ worth of debt for us. At least the world is safe and won’t go bankrupt…