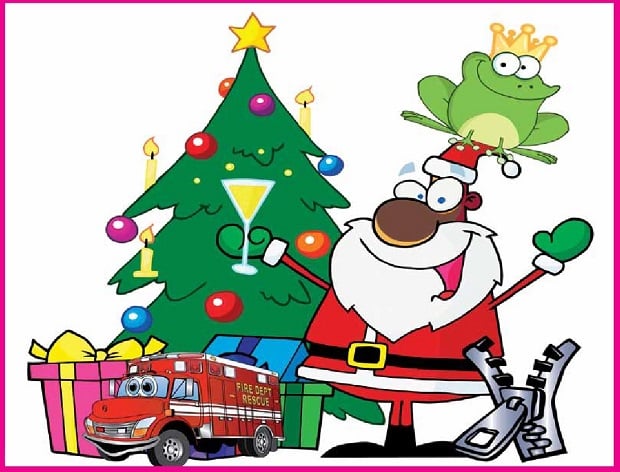 Reading Time: 4 minutesChristmas is a time to be generous, so here is a leisurely list of gifts fit for pollies, princes and PMs, writes LP AYER

I don’t know about other State capital cities, but in Adelaide we are reminded of Christmas approaching as early as the first week of November when one of the city’s biggest pageant rolls down its main thoroughfares. It is either to help the locals plan their shopping strategy in advance, or for retailers to raid our credit cards sooner than others.
With our two children having grown out of the ‘can-we-have-a peek’ stage, we now need to ponder over presents for only our two grandchildren. Lucky, in a sort of way.  So with some shopping time spared, I indulged in a whimsical exercise of what would be on the wish-list of those who appear, at the flick of a button, on the slim screen in our lounge rooms around dinnertime.
Who else can you think of first, other than the captain of our ship for the next three years?  Initially it seemed so easy to choose something for this action man who can sprint, swim and surf. It may be tokenistic to buy a bike or boogie board since he will have a stack of them. Having proven his skill in putting out bushfires, a fire truck may be a fitting present. In his current position he will be called upon to put out scrub fires within his party ranks or on the national and international arenas. However, a red truck, apart from being a colour mismatch with his philosophy, is not a toy befitting the Lodge.
On second thoughts, he may be happy to get a couple of leaky (ab)boats built at some Jakarta backyard. His plans to buy every rickety raft from Indonesia having been torpedoed by his Bambang buddy, a couple of rusty boats will be a welcome present to be proudly berthed at the Kirribilli waterfront.  The Opposition leader may even dip into his Parliamentary allowance to gift one U boat to taunt him on some policy u-turns.
No bloke in his wildest dream will be eager to receive a letter from his mother-in-law. But not this guy, whose mother-in-law is the Queen’s rep in Oz. Short in name but not in stature, he would dearly love to get one inviting him to form the government. But such an invite may take another three years or more in the coming. He may not receive one at all if he gets the same treatment he meted out to his previous leaders. Until the sun shines on his patch, the best gift for him will be a bank of solar panels so that he may not receive or be called electricity bill.
Zip. A metre-long zip is the ideal present for the one who delivered a 22-minute speech, sounding like a victor after badly losing the electoral race, to shut his trap.  It will best complement the ‘will this guy ever stop’ badge earned in a TV debate. Fittingly he ended his last Parliamentary speech  with, ‘gotta zip!’ Rudderless, once again…
For our own Adelaide girl, who once held court in Canberra, a seat on the State’s High Court may be a long-term dream.   The grey wig that goes with that job will help to cover her ‘ranga’ hair. In the meantime, a set of sharp knives for the kitchen bench at J’s $2million seaside mansion will do, since the one she used earlier did not finish the job and the victim came back, only briefly though!
More than anyone above, the person who deserves a good gift from Santa is a pensioner- prince who lives not far from the Old Man’s North Pole. Having recently reached the pension age of 65 without doing a day’s work for which he was destined at birth, this (bonny prince) charlie has now gained the dubious honour of being the longest waiting heir to the throne.  A replica throne dropped through the chimney at his palace Clarence House will be Santa’s gift of the year for this new grandfather, before his grandson stakes his claim. A crown, even an imitation one, will be a bonus.
Adorning his crown with nothing but a blue turban, the soft-spoken Sardar who presides over a billion people could do with some other colour for a change. But what colour?  With the election battle soon to begin, white may be seen as a sign of surrender and black a sure sign of mourning, anticipating a loss of the race. So sticking with blue will be the Man’s preferred choice, banking on his reserved temperament.
Mo(d)ivated strongly to become the next prime minister, this  Gujarati generalissimo will settle for  nothing but the Delhi ‘durbar’, while a certain mother will be wishing that her son gets it as sort of family’s birthright.
Oops, I have indulged in this fanciful exercise for too long. It is time to think of Chrissie pressies for my grandkids. Gotta zip!
Season’s greetings to all readers. A loving family is the best present anyone can wish for.