Moving Day for the Trumps 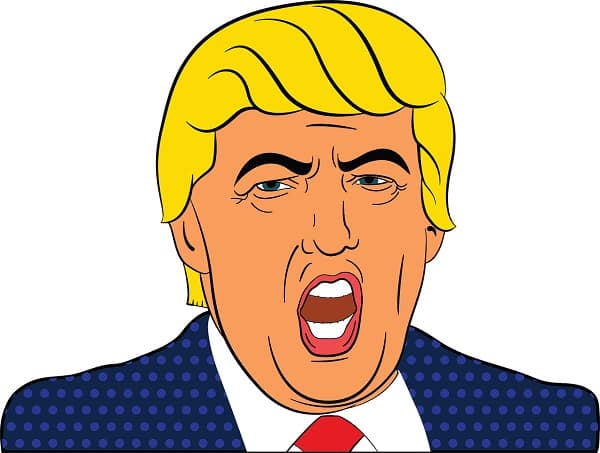 Imagine that moving day has finally arrived for the Trumps. It is the morning of 19 January and some well-armed guards are dragging a hefty man out of the expansive White House, even as he kicks and screams, “I want four more years on this lease!” A huge crowd gathers outside on Pennsylvania Avenue, watching this scene with great amusement. A few protesters (ahem, rioters?) wave hand-made placards, all the while cribbing about a ‘robbed’ election.

Inside, the classic black suits of the Secret Service can be seen clearing the Oval Office. They expect to find a great pile of sensitive documents. Instead, they’re surprised to unearth an assortment of unusual items in the drawers of the mahogany desk.

In the top drawer are golf balls with the names of VIP players inscribed on them, along with precious score cards of games. (They all have one lead scorer: Trump.) In the next drawer, there is a half-empty bottle of disinfectant, presumably the same treatment that helped dear Donald recover from such a short spell of COVID.

Beside that, there’s a saffron-coloured shawl. You know, the special gift from the Howdy Trump gala with NaMo that reads ‘Ab ki baar, Trump sarkar‘ in Devanagari-esque cursive. Peeking out from underneath the shawl, hidden to the untrained eye, is a huge pile of pink slips used to sack White House staff. Alas, no one from the Secretary of State to the lunch lady was immune.

A special key is exchanged between the Secret Service agents to unlock one last goody on the table: the personal computer of the President, now padlocked by Twitter, Facebook and more. With the graceful turn of a key, it falls to the ground, putting an end to Trump’s reign of misinformation.

To prepare the house for the next occupant, maintenance men wash the walls, doors, and door handles with gallons of sanitizer. No one has the heart to share with poor Trump that it’s all imported from – you guessed it – China. As if cementing the man’s nightmare, a new shingle is also placed at the main gate: ‘J Biden’.

Inspired by my cartoon about Trump’s departure from the White house that I made for @Mondoweiss, “Grimm” made this drawing on a $ 20 bill!
🤣🤣🤣🤣 pic.twitter.com/6fZwiPMKx6

Even as dozens of removal trucks move out with loads of designer frocks, shoes and other accessories of Melania Trump, a lone truck pulls up with dozens of hot idlis specially cooked for Kamala by her chithi (mum’s younger sister) in Chennai, speed-posted for her Inauguration Day breakfast. There’s also a small packet of temple ‘prasad’ sent by the people of Tulasendrapuram, Kamala’s ancestral village. (But do they hear some of her pronouncements are not that India-friendly, according to those in the know?)

Across the pond at Downing Street, Bo Jo is expecting Jo Bi to keep up the tradition of visiting Britain first as a mark of respecting Anglo-American bond. Meanwhile, in far off Beijing, the sphinx-like Xi Jinping has already begun drafting an invitation to Joe Biden to visit the ‘ForBiden City’. New Year, new beginnings, perhaps…

Cartoonists all over the world plan an online wake on Zoom, one last ode to the man whose catchphrases and actions were their staple diet for four long years. I, too, will miss Trump, having written more on him than anyone else. But I’ve learnt not to count him out, the man who has mastered the art of the comeback.

For now, though, we can all agree to hope not for the comeback of 2020.

READ ALSO: US Elections 2020: Trump is finally the ‘chosen one’

WATCH: Monkey helping in the kitchen

Ask Auntyji: On sinning and on fake compliments