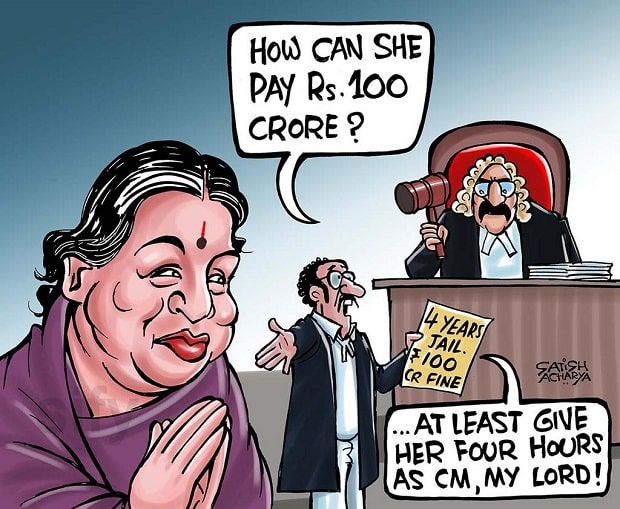 Reading Time: 4 minutesIs it triumph or tragedy for India’s most controversial and colourful politician?

Amma is the most pervasive palindrome in Tamil Nadu. Unless you are totally blind, there is no way of missing that word and its owner, moon-faced matronly-looking Jayalalitha, plastered on every wall in the poster-polluted provincial capital, Chennai.

With the populace of this state neatly divided into two political camps, any excuse is good enough to start wall-to-wall coverage glorifying their leaders. So it is only normal to expect Chief Minister Jayalalitha’s achievements to be publicised in larger than life format on every street corner.

But when I arrived in Chennai early October, the texts had a twist. I saw a variety of posters with a single message – demanding her release from prison.

Jayalalitha was convicted on 27 September in a Bengaluru special court on charges of accumulating assets worth Rs66.5 crore, disproportionate to her earnings and entitlements.

That sum works out at one crore and a bit for every year of age for this 66-year-old former movie star. She was sentenced to four years imprisonment and given a Rs100cr fine. This judgement came 18 years after the case was filed thanks to her legal team successfully seeking so many adjournments.

Amma applied for bail to appeal against the judgment, but the Dussehra holidays delayed the hearing. So her loyal party men conceived various protest movements, ranging from ridiculous to religious, to demand her release.

First the posters accused the judge of getting even with Amma because of her successful fight against Karnataka over the Kaveri water issue. Some of them even had an undertone of threat.

This did not cut the mustard with the judiciary and drew some condemnation. Some of the Members of the Legislative Assembly, being lawyers, should have known better. In their eagerness to exhibit their loyalty to Amma, the party’s big-wigs vied with each other to organise bigger and more bizarre protest marches, many of them with religious overtones.

To mention a few, special ‘pujas’ were held at many temples praying for the bail hearing to be speeded up. These prayers may have prevailed upon the divine Lord, but not the special court lord. Next they started holding havans at famous temples in large cities attended by hundreds. Trying to send some smoke signal?

Not to be outdone by temple throngs, some churches and mosques held mass prayers. Crossing the caste barriers?

For women supporters, their loyalty for Amma went to their heads, literally. Some 3000 women took out a procession carrying pal kudam (pots of milk) to offer to a local temple in Madurai.

Women’s support for Jayalalitha comes not only out of gender affinity, but also due to a number of freebies offered to them on her birthdays – saris, grinders, maternity packs containing goodies for newborns and much more.

But men too went head over heels in their support. Thousands of them had their heads shaved in a mass tonsure event. Some men pierced their cheeks and tongues with thin sharp metal lancets as they do at the ‘Thai Poosam’ festival. Some MLAs undertook four-hour fasting – not eating between lunch and dinner!

Every event was given extensive coverage on Jaya TV (Amma’s own) to the exclusion of any other news. On the other hand, it was total sunset on the Opposition’s Sun TV.

The star attraction for the former movie queen was due to her new ventures like Amma Cafe where a plate of idli (typical Tamilian breakfast) is sold for five rupees as opposed to Rs60 in any restaurant; while Amma Salt and Amma Mineral Water are among other low-price offerings.

And to cement her place in public esteem, the latest venture is Amma Cement offering a few hundred bags at half the standard price to encourage the poorer sections of the community to build a house.

At last when the bail application was being heard, one reporter prematurely announced it had been successful. On hearing this, women well past their fifties danced in the streets a la Bollywood and loads of laddoos were dished out. But when the official announcement of bail refusal came a few minutes later, the dancing women felt so desolate they started rolling on the roads beating their chests. A few days later the issue was taken to the Supreme Court which allowed bail albeit with some stiff conditions. Minutes later, loads of laddoo trays re-appeared followed by deafening firecrackers. All those prayers seemed to have been answered.

But not for the 173 people who lost their lives. Amidst all those frivolities there was a very sad chapter in this saga of sycophancy.

Grieving over Amma’s arrest, 75 people committed suicide, 17 of them set themselves ablaze, and some poisoned themselves or jumped in front of heavy vehicles. Others were reported to have died of heart attacks, shocked by the sentence.

Coming out on bail, Amma announced a relief amount of Rs3 lakhs for every victim’s family. None of them belonged to the coterie of ministers, MLAs or their family members. Common folks consumed by passion for their leader. Is it really worth it?

With photos from A.S. Diwakar, Chennai