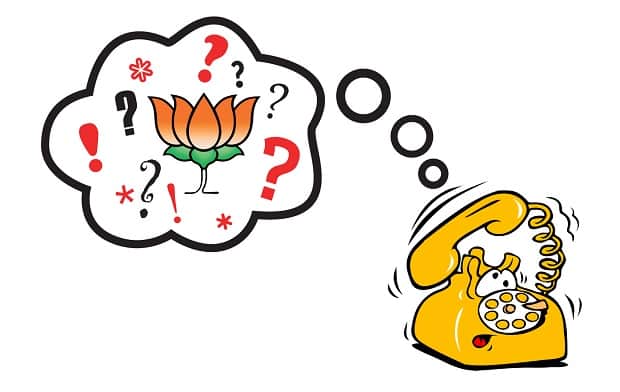 It was Saturday, May 17, around six in the morning. Being an autumn day, it was still quite dark.

I woke up uttering this simple two-worded devotional line: I bow to the Almighty. It is a childhood habit I have carried into my adult years. Like most Indians, I have a habit of seeing or saying something godly first thing in the morning so that the rest of the day goes well.

As I rolled out of the bed, the phone rang. Unusual in our household. I quickly grabbed the handset and shafted to the next room so that my wife’s beauty sleep was not disturbed. She loves her early morning sleep. Me, I am just the opposite. Having married in the pre-internet and matrimonial website days, we had no opportunity to discuss such compatibility issues.

“Namaste. NaMo wants to talk to you,” the voice on the other end of the line said.

OMG! I couldn’t believe my ears. Having uttered ‘namo’ only a few seconds back, the good Lord (Narayana) had chosen to talk to me. How blessed, I thought, for one who is only moderately religious to have such a stroke of fortune.

“Ayerji, this is Narendra Modi,” a familiar voice came on the phone. “I learn that you occasionally write for the Indian Link. Through your column, I wish to convey to my fellow Indians, my plans for the development of our nation and seek their contribution. I know there is a growing Gujarati community out there in Australia”.

While my elation eased somewhat on realising that it was the ‘namo’ of human kind and not the celestial, I was still thrilled that Modiji had chosen to give me his first interview while stalwarts like Tony Jones and Laurie Oakes waited in queue.

“You’ve made my day, Sir,” I said with humility. “Please go ahead”.

I grabbed a notepad and pencil and was all set.

Next minute there was some static on the line and I began to hear some cross talk. Cross lines on the Indian telephone, it seemed, had not changed a bit since the days of Mr. India, one of the best comedy movies to roll out of Bollywood.

Waiting for the call meant for me to come through, I decided to listen in on the conversation.

Faint voice in the distance: Naren bhai, I would like the job of …

Modi:  Lal Kishanji, I can hardly hear you. Please speak up.

LK Advani: That is what I am after. I want to be the Speaker.

NM: Advaniji, in your advancing years, won’t it be difficult for you to control the House? The Opposition always indulges in cat calls, walk-outs and dharnas. We did that too while in Opposition.

LK: No problems there, there is hardly an Opposition this time. RaGa (Rahul Gandhi) was not even in tune with the masses during the campaign. What Sonia says is Greek and, certainly, Latin to most. Think I can manage.

NM: I have already pencilled you in for the prestigious post of Aged Care Minister.

NS: Salam alekum, Modi saab. Thank you for your invitation for your inauguration. I think I will make it to your party. See, I’m concerned that if I leave the country the Army may not let me back in. They may follow my example and do what I did to Mushy as he flew back from his visit to Sri Lanka. Anyway, dekhi jayegi… I’ve made my mind up. My team’s already saying Dilli chalo!

Jiten: Sir, Bangla begum Mamta didi is on the line.

NM: The last time she was the Railways Minister, she took the (train) toys and went home half way in the game. What is she signalling now? She can’t derail me anyway. Tell her I’ll call back soon.

Jiten: Sir, Amma from Chennai! She’s decided to support you.

NM: Didn’t she pull the rug under Atalji’s feet last time and let the Gandhi mob in for the next ten years? Anyway put her through.

Jayalalitha: Vanakkam Modiji. We have decimated the godless gang of Karuna and his corrupt cohorts. With 37 of us we can stand solidly behind you. Can you offer…

NM: Sure, an invitation for my inauguration.

NM: Jiten, only Mayawati hasn’t called yet. With her poor showing she has become ‘Mouna wati’. During the campaign, I thought she would prove the elephant in the room. Thank god she is a jumbo failure. Before the results were announced I was concerned I would need the co-operation of these three regional queens. Imagine being forced to listen to the dictates of three women. Just one Sonia was enough to undo the good Sardar. Bidding her orders, the poor guy became Man maun Singh.

At this point, my dear wife entered the room.

“What has come of you, holding the phone for ten minutes and not saying a word?” she chastised me.

Powerless to admit the loss of an exclusive interview with the leader of the world’s largest democracy, I answered sheepishly, “Some telemarketer… wants to sell some cheap power”.