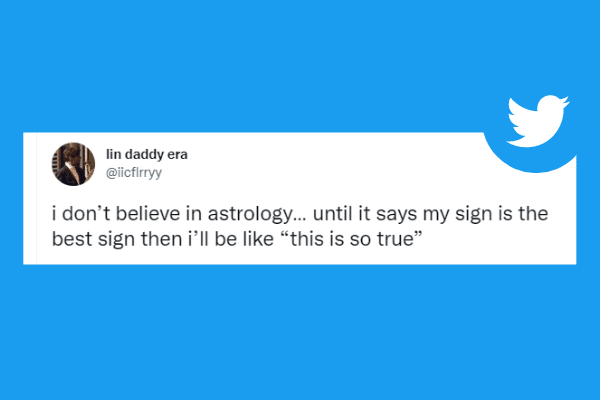 Whether you read your horoscope every day or avoid it like the plague, we all know at least one person particularly invested in their zodiac sign predictions.

You know, that one friend who’s prone to saying things like “you’re such a Libra!” at peculiar instances or “don’t be such a Pisces” on moody days.

Maybe there’s an art to this, maybe it’s just fun. Either way, 20 March marks International Astrology Day, so we figured: why not toast these unique individuals in our lives?

when someone asks my astrology sign and then say “that makes sense” after i tell them pic.twitter.com/d3xCk8TmYZ

Though sometimes they take things a little too seriously…

I’m just consistently floored by how well astrology works. Like ??? The planets DO that ??? And we understand it ?? And most of society thinks we’re out of our minds but we kind of know the secret code to the universe… like this shit is ACTUALLY mind blowing.

When that happens, you really can’t help but poke a little fun.

since y’all know a lot about astrology, where’s the samsung galaxy located?

I mostly use astrology to figure out why I’m weeping on any given day. and why my cat is yelling at me

is there an astrology thing going on rn i can blame my poor mental health on?

Astrology is so complicated it’s like why not just learn science?

But all jokes aside, did a good horoscope ever hurt anyone?

Astrology is the best icebreaker I’ve ever had available to me.

PS: In case we’ve piqued your interest, have you checked out your March horoscope yet?