An entertaining and slick sequel 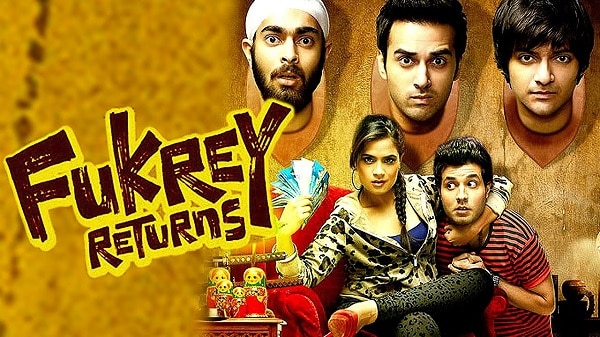 There is a kind of quirky credibility in the way the characters of Fukrey have grown on us ever since they were seen in the first instalment of this film. It’s been nearly five years. But we haven’t forgotten Hunny, Choocha, Lali, Pandit and, last but not the least, the woman who won’t be put on a leash, Bholi Punjaban.
Please note, I make no mention of Zafar, played by Ali Fazal, as his character remains strangely sketchy, unfinished, incomplete. He is a Fukrey on the look-out for a more fleshed-out platform of expression.
Strange, because the other principal players in this prickly parody of Capital consumerism are so vividly etched, we feel we know them inside-out. Fukrey Returns acquaints us with the bang-gang even better than the first Fukrey film.
And boy, is the gang having fun!
Wait… no, not so much fun when they are hunted and chased down by a mob instigated by a wily, slimy politician.
It’s all done in the spirit of a festive if doomed farce, orchestrated and executed with a casual finesse that is easy to miss if you are used to haphazard slapstick comedies from Bollywood. Trust me, there is nothing haphazard or random in the way writer Vipul Vig and director Mrighdeep Lamba spin a destiny of disconcerting chaos around the characters.
The narrative is piled high with breathless action, a lot of it involving the characters running around the narrow lanes and over-bridges of Old Delhi. The cinematography (by Andres Menezes) is constantly hunting down elusive dreams in crowded, bustling roads. For a large part of the film, the protagonists are either being chased or hunted down, even in their dreams. Wet or otherwise.
In the opening sequence the film’s hero Bholi Punjaban – played with lipsmacking relish by Richa Chadha – appears in Choocha’s dream as a snake. Richa’s ichhadhaari naagin act puts all her illustrious predecessors from Rekha to Sridevi to shame. It’s the fun that she seems have while spoofing cinematic conventions while playing a gender-proof gangster (with two Black African henchmen by her side) that makes Chadha the most unconventional hero seen in a mainstream film.
The boys seem to have a lot of fun being bossed around by Richa’s (anything but) Bholi Punjaban. Their camaraderie is parodic, yet so real in a Punju-Delhi way that we feel we’ve met these badass blokes at the traffic light.
Lamba directs the ensemble cast with verve and affection, punctuating their exquisitely colloquial quips with unexpected bouts of tenderness. While all the performances rate a big shout-out of approval, Richa’s Bholi Punjaban is indeed the film’s hero. She attacks the role of the woman in command with the relish of a customer at a restaurant attacking a plate of succulent chicken legs.

I must confess Varun Sharma’s Choocha is my favourite Fukrey actor. Sharma invests his part with a lot of foot-in-the-mouth heart. His Choocha is a lovable loser, an incorrigible dreamer and a chronic disaster. Among the rest of the protagonists, Pulkit Samrat (very hero-material type but still not getting there), Pankaj Tiwari (always brilliant) and Navjot Singh (never out of character) play their characters with a mixture of gusto and desperation – just what the film requires.

Special mention must be made of Rajiv Gupta as the slimy politician with a sidekick whom he makes do the most unmentionable demeaning acts of servility, a genre-specific villain that Gupta plays with such restraint and relish it’s like the filmy neta being rejuvenated in ways that are at once exciting and amusing.
And then there is that striking cameo of the river diver played by Ashok Pathak – an obvious homage to the late Ashraful Haque’s memorable cameo as the thief, Shakiya, in the first Fukrey film. When Choocha nearly drowns and Pathak must give him mouth-to-mouth to revive him, we nearly gag over the irony of the diver who goes down to fish for coins with his mouth in the river bed, putting his mouth to more urgent, if far less desirable, use.
Interestingly, this is not the only bad-breath moment in this film. We come across one earlier on when Pulkit’s Hunny demands a “French kiss” (that’s what he calls a liplock) from girlfriend (Priya Anand) and she refuses since he’s non-veg.
Bad breath gets a bad name in Fukrey. But it’s all in good taste. Circumscribing a world of chit funds, bodypart smuggling, animal poaching and French kissing, the wickedly anarchic world of Fukrey Returns is much smarter and far more intelligent than it outwardly seems. This is a world of rapidfire happenings where what goes around doesn’t necessarily come around.
At least, not in the way you expect it to.