Epic battle of an election 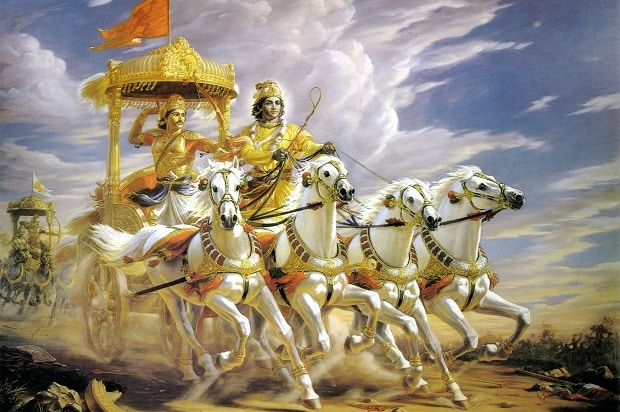 The vast maidan in front of the Hasthinapuri palace was packed with protesters brandishing placards, demanding a change of government. Inside, the 100-strong ministry was in an emergency session. After a 12-year regime without any opposition, the rulers seemed to have lost their way and the only choice left to them was to call for an election. But having come to power outside an electoral path, they had no idea of how to face and win an election. So they called in all the wise men in the kingdom – Dhrona, Bishma, Vidura, et al.

“Brothers… oops… colleagues, this is a turning point in our life”, said Dhuryodhana, “and we need every ounce of counsel and cash to fight this battle. The public seems to favour our opposition, the Pandavas, even though they were in exile and had no media exposure for over a decade. I want each one of you to come with an idea”.

Duchathan, being the second in command, was the first to venture with a thought. “We need to announce some major programmes like ‘garibi hatao’ or ‘panch seel’”, he said.

Dhury: Are you out of your mind? Never utter ‘panch’, it may be mistakenly attributed to the Pandavas. Uncle Sakuni, you are a genius. Machiavelli marvels at you and Kissinger keenly follows you on Facebook. Any clever ideas?

Sakuni: What about another chess game?

Dhury: That’s old hat! Who plays chess when the internet has tons of gambling games!

Kaurav3: I have been playing those games and am good at them. Bring it on!

K4: I could do a better job too, as I have been watching on my laptop those movies where it is routine to disrobe…

Dhury: Sorry! Who wears sarees in our country now when Bollywood babes dare to bare all, with Poonam Pandey and Sunny Leone outstripping them all? Uncle Sakuni, please come up with a super con job?

Sakuni: We open a casino and offer free offers to the Pandavas: Nowadays, the Crown is the place to lose one’s crown.

Dhrona: I am afraid you can’t escape democratic routes any longer. Otherwise people may resort to Arab spring-like demos.

Bishma: For an election you need a party with a popular name.

Vidura: That sounds like an updated model AK47; no voter will bite the bullet.

Bishma: Next we need catchy slogans like ‘Kevin 07’ or ‘Stop the boats’.

Dhury: How about ‘Kauravs for corruption hatao’.

Bishma: Um… We need to think up better ones. Next to catchy slogans, you need cash, a lot of it.

K6: But the gajana is empty. We are running a big deficit. Karna too has lost his lot in GFC, including his earrings!

Sakuni: We must form a fundraising committee. I have a few experts in mind – Mayawati, Maulyam, Lallu Prasad, Pawar and the super schemers from the South – Karunanidhi, A Raja and the Marans. Of course, there are a lot more from every corner and we can form several regional committees…

Dhury: (Admiringly) Uncle Sakuni, you are amazing. Go ahead with your plan. What next?

Dhrona: We need to allocate constituencies for your clan of 100.

K7: I don’t want a ‘yadava’ one. Krishna will corner all their votes!

Dhury: As part of the campaign, we may go on a 100 ‘rath yatra’ to let people know we are not faceless men.

K5: Advani had done that. It was a fizzer. To be more modern we should go in a fleet of 100 Nanos…

Vidura: We may not win a majority. We need to form alliances with minor parties like Janata Dal, Bajrang Dal, etc.

Bishma: With so many ‘dals’ we may end up with a ‘kichidi’ government.

Dhury: Talking about kichidi, it’s time for a lunch break. Let’s meet again after that.

Around the same time, the main opposition group, the Pandavas, were in session at their hideout.

Yuthishtra: ‘Change,’ that’s what people want. See how Obama used that one word like a magic bullet. We know people are on our side. All that we need is to run a campaign of ‘dharma.’  That is our Modi’s operandi.

Arjun: I need a lot of my posters on every tree so folks won’t confuse me with Arjun Singh.

Bhim: My ‘gatha’ can be our party’s symbol to show that we will crush all corruption.

Sahadev:  How about the bull as a symbol? During the exile, I acted as a cowherd and it worked well.

Nakul: It was once the Congress party’s symbol. The way that mob is faring right now, it won’t be bullish.

Krishna: I bet on the horse. Um… I mean the horses pulling Arjuna’s chariot as I narrate the ‘Gita’. That image is in everyone’s mind and will carry you over the line.

The Pandavas nodded in unison and loudly chanted, ‘Jai Krishna!’

“Nice of you to think of God even in your sleep. But do you need to shout so loudly?” asked my wife elbowing me and breaking up my dream.