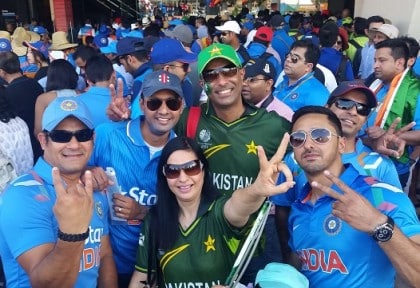 Following the Champions Trophy defeat, India’s cricket devotees chose to look back in humour, rather than in anger

At first, it read like any one of the mushy messages that clog our phones on festive occasions: “Which father won’t be proud of his son beating him at a game!”
Except, this was no fuzzy Father’s Day forward. The second line of the message said, “Shabash, Pakistan!” Well done, my son Pakistan.\


Two lines. That’s all it took for the writer to dispel the Average Indian Cricket Devotee’s dismay of defeat against Pakistan in the Champions Trophy final. The message was a bit funny, very gracious and had managed to put a smile on the reader’s face.
Come to think of it, it was a fuzzy forward, because it touched the heart.
This struck me as oddly satisfying. Having read through more than my share of invective on Indian social media at the mention of Pakistan in recent times, this message was a refreshing change.
But this wasn’t the only forward of its kind on that day. Even as India began to crumble against an incisive Pakistani attack, another message from a friend living in India read: “Other options on TV: Jurassic Park on Sony Max, Terminator 3 on Movies OK, Munnabhai MBBS on Sony Max 2, or best, Aastha channel.”
Meme-makers weren’t to be left behind. With a screen grab of Jaspreet Bumrah’s now-infamous no-ball on top, the meme showed Ramesh and Suresh of the 5-Star chocolate ad fame tweaking one of their famous lines to say “Bumrah ki taang ek billang chhoti kar do.” (Reduce the height of Bumrah’s leg by a bit.)
A cartoonist even drew an ‘artist’s representation’ of a practice pitch for Bumrah. In it, the no-ball crease was marked right on the edge of a cliff to make sure he didn’t overstep it!

Heck, someone even dragged Indian Prime Minister Narendra Modi into the whole thing: “Modiji should have bowled instead of Ashwin and Jadeja. He spins (a yarn) the best.”
They just kept coming. There was a wordplay – unmentionable in these pages – on the names of Indian all-rounder Hardik Pandya and Pakistan opener Fakhar Zaman, who scored his maiden century in the final match. But it was all in good humour.

There was no bile, no venom. There was no baying for the team’s blood. There were no calls for resignation. The troll-favourite hashtag, #shame, was nowhere to be seen.

It wasn’t always like this. It still isn’t.
Hyper-nationalist Indians have taken to social media to tear into Pakistan, especially after tensions have escalated following the terrorist attack on a military post in Uri, Kashmir, in 2016. Pakistani artists have been out of bounds from performing in India. Bollywood film-makers who made movies with Pakistani actors have faced severe backlash and have had to make unqualified apologies and ‘won’t-do-it-again’ promises. Pakistani TV serials, admittedly with much better content than Indian television’s saas-bahu melodramas, have been pulled off air in India.

Go back a few years, and the Average Indian Cricket Devotee was a volatile beast. Chetan Sharma, whose attempted-yorker-turned-full-toss to Javed Miandad resulted in a last-ball six and victory for Pakistan at Sharjah in April 1986, remembers being the most despised man in India for some time. He recalls fearing stepping out of his house until several days afterwards for fear of retribution. A few years ago, he told Indian newspaper DNA, “There have been many similar incidents recently. But how many remember them? Even R Ashwin was thrashed by Afridi in the last over of Asia Cup, but people don’t remember that. During our time, passion was at a different level.”
Indian middle-order bastman and crackerjack fielder Mohammed Kaif will remember how an irate mob threw black paint at his home in Allahabad in Uttar Pradesh after India’s loss in the 2003 World Cup first round match against Australia. After India’s first-round exit from the 2007 World Cup in West Indies, it was MS Dhoni’s under-construction house in Ranchi, Jharkhand, that bore the brunt of rampaging fans. Mercurial fans, revering the Indian team after a string of victories but running it down after even one defeat, have burned effigies of players they thought were responsible for the loss.
From those days when passions ran high, it has been a steady mellowing of tempers. India’s tour of Pakistan in 2004 is as much remembered for Virender Sehwag’s 309 in Multan as the warm reception the Indians received across the border. Indians reciprocated the gesture when Pakistan toured India the next year.
When India once against travelled to Pakistan in 2006, and handed the hosts a crushing defeat in an ODI at Lahore, the then Pakistan President, General Pervez Musharraf, tugged at many a heartstring when he praised MS Dhoni’s flowing mane. “A lot of placards in the crowd have suggested that you should get a haircut, but if you take my advice, you look good in this hairstyle,” Musharraf had famously said then.

Dhoni didn’t take the advice and cropped his hair, but the Pakistani leader’s love for him remained undiminished. Four years later, Musharraf remarked, “Though Sachin Tendulkar is the world’s most consistent cricketer, Dhoni is the most entertaining and exciting. Once I praised his hairstyle. Now he has gone for a shorter haircut, but he is still exciting to watch,” he said.
Then there’s the memorable standing ovation that the Pakistan team got from a nearly-packed stadium in Chennai after defeating India in a hard-fought Test match in 1999.
Relationship between the two nations has gone from petulant to amiable to frosty, depending on the political climate in the region. Of late, it had again taken a turn for the worse.
But if events related to India and Pakistan throughout the Champions Trophy are anything to go by, there may be light at the end of the tunnel.
Earlier in the tournament, Pakistan skipper Sarfraz Ahmed became the butt of jokes when his discomfiture over journalists speaking in English during a press conference became apparent. However, Indian fans showed the trolls their rightful place. “English language isn’t a benchmark of genius,” one Twitter user said. “He may not know English, so what? He is a cricketer, not a TV anchor,” another added. A few days later, MS Dhoni’s picture with Ahmed’s four-month-old son Abdullah went viral, drawing praises on both sides of the border.
Indian captain Virat Kohli, known for his on-field expletive-filled aggression, was also gracious in defeat. Virender Sehwag, known to wag his Twitter tongue, was also all praise for the Men in Green: “Congratulations Pakistan on a really comprehensive victory today. Well played, deserved winners and a great result for Pakistan cricket.”
Perhaps, the Indian fans, too, emulated their heroes who didn’t turn out to be sore losers.
India and Pakistan have always had high-intensity sporting contests that have brought much character to the game in question. Perhaps for this reason, fans on both sides of the Line of Control (LoC) have been known to cross the limits when their respective teams were defeated.
On the night of 18 June, however, there was a different LoC at play: Love of Cricket.