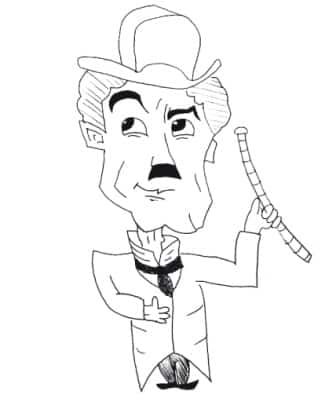 Reading Time: 4 minutesSlapstick comedy of the past still has the power to enchant and amuse the modern generation, writes SHERYL DIXIT


In an attempt to introduce a more refined form of humour into the lives of my young sons, I recently got them a DVD of Charlie Chaplin. Now the boys are charming and annoying in equal degrees, but some of their more unenduring virtues are to find anything relating to specific body parts absolutely hilarious. So they will laugh with abandon at fart noises, giggle with glee at burps and don’t even get me started with describing the pre-bath routine…
So I thought, if slapstick is their thing, the sight of an ill-dressed man with an ill-trimmed brush moustache, baggy pants, bowler hat and cane performing odd antics would be bound to take their minds off the scatological content that currently seems to dominate their young lives. A bit of innocent walking into doors, falling over feet and getting chased by baton-wielding cops would raise a few laughs. Charlie Chaplin and Laurel ‘n’ Hardy were a staple during my childhood and brought us hours of rib-cracking joy. And so, I brought home City Lights, one of Chaplin’s masterpieces, which at first, didn’t interest the boys at all. However, one evening after we had exhausted the superhero repertoire, I managed to convince them to watch it. With surprising and interesting results.
Now its been a while since I had watched the movie myself, and I was keen to rekindle some of that joy I had experienced when viewing it as a child. But like most plans that involve my two jokers, nothing went quite according to how I hoped it would. The beginning was innocent enough, but the first question I was asked was, “What are they saying, why can’t we hear them?” It took a while for me to get through a somewhat garbled explanation on the joys of silent movies, by which time, more questions followed.
“Why are those boys bullying him?”
“Is he smoking? Doesn’t he know that its bad for him?”
“Why is he looking at that girl like that?” This was a mannequin in a window, which Charlie was unashamedly ogling.
The questions continued.
“Why does that guy have a rope around his neck?”
“Why is he driving, would he have a licence?”
“They have no seatbelts, that’s dangerous!”
“Are they drinking alcohol?”
“Why are they dancing so funny?”
By this time, the movie was exhausting me too, as my brain grappled to answer the barrage of questions that were being fired at me. And then came the scene where Charlie encounters the blind girl. “Oh no,” I thought, “I’m in for it now!” And I wasn’t disappointed!
Explaining the concept of the blind girl was tough work. Why she couldn’t see, how feeling would help her, how she would have to rely on her other senses…. Just as I thought I was getting somewhere, my younger one piped up, “but mum, she can’t speak either. See, I can’t hear her, can you?” I too, was speechless.
Another excruciating point of discussion was several scenes in which the actors appeared drunk as lords. “Is that how people behave when they’ve drunk beer?” asked one of them interestedly, possibly deducing that their dad’s consumption of the beverage is mostly harmless and insufficient, as he doesn’t exhibit the same abandon that they were viewing on the small screen! I didn’t answer that one…
Now through this, I have to admit that the movie had them riveted. They picked up the subtler nuances and laughed heartily at all the right times. We all particularly enjoyed the scene in the boxing ring as Chaplin, his opponent and the referee do an amazingly coordinated dance routine several times over. They laughed hugely and naturally, at the end of the movie, attempted the same thing between themselves with hilarious results.
Chaplin movies tend to have a fair bit of physical violence, with people getting into a scrum, chasing each other, tripping over, clouting over the head and the inevitable kicks in the backside in which the recipient (usually Charlie) catapults several inches in the air. There was an abundance of these scenes which caused immoderate and happy laughter, making me realise that there is indeed a wicked sense of enjoyment in someone else’s pain. And Chaplin himself is a virtuoso in enacting these scenes. Strangely, the next morning I found them on the lounge, feet entwined as they watched the entire movie again from start to finish, in silence and harmony!
Watching the movie made me realise that the boys do need to be exposed to some more of Chaplin’s art, and we’ll throw Laurel ‘n’ Hardy into the mix too. It will raise an enormous lot of questions again on the political and social correctness of the world we live in, but it will also give them a sense that the world can indeed, be a funny place. And I can only envisage the discussions that will ensue, about who will be Laurel and who will be Hardy, (a bit of a non-starter as they are both skinny) but they will, no doubt, find a compromise.
Besides, their attempts at emulating these great actors will keep us amused for a long, long time. So move over, Mr Bean and Spongebob Squarepants, real comedy’s making a comeback!
- Advertisement -
Share
WhatsApp
Facebook
Twitter
Linkedin
Previous articleHistoric Hampi comes alive
Next articleWhen Bombay Jayashri serenaded Sydney