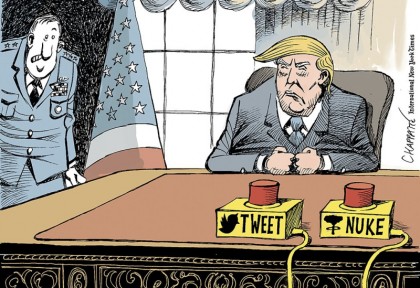 It is not all black and White in this House!

Days after his surprise victory in the US elections, The Donald is lying beside the swimming pool in his sprawling mansion, surrounded, as usual, by a bevy of beautiful women. This time it is his own brood, though often his universe is crowded with Miss Universes.
His mobile phone rings. “This is the White House. Your appointment with President Obama at 11am is confirmed.”

The President-elect, in his trade-mark red tie, arrives in his black limo at the gates of the White House. Two large groups of citizens greet him, one shouting “Not my President!” and the other in a countering voice, “Lock her up!”
Even the beefy guards seem to be divided – like the rest of the nation – some happily waving him in, with a few pulling a long face.
“How are you, Donald?” the President greets him with civility.
“A bit heady, Mr President,” he replies and adds with characteristic pomposity, “But that’s not surprising, eh?”
“Welcome to the Oval Office. Please sit down. We will get down to transition arrangements shortly.”
Instead of taking a seat, Trump walks around the room inspecting every picture on display. “Oh, this is your dad…from Kenya,” he smirks.
He strides towards the mantelpiece as if expecting something there.
Pulling out a framed document from the top drawer, Obama says with a sigh, “OK, here it is. I knew you’d come looking. My birth certificate from Hawaii. You carried on about my ‘birther’ issue for years…”
“All history, dude!” Trump says, with a brush of his (small) hands. “In the election heat, we call each other all sorts of names. I even said you created ISIS, ha ha.”
Obama rolls his eyes. “I didn’t, but am about to launch it now. ISIS, the International Society of Intellectual Speakers, will enable me to get on the speaking circuit after I retire. Ok, let’s get down to business.”

Time seems to fly. The 15-minute appointment stretches to an hour, covering a range of subjects. It is followed by a quick tour of the house.
Walking along the long corridor leading to the famous Rose Gardens, Trump mutters aloud, “This is the perfect place to put a catwalk for future Miss Universe pageants. Perhaps I could re-position The Oval Office to view the bikini beauties from there…”
Then, moving through a maze of tunnels and heavy steel doors in the basement, Trump queries, “Hey Barack, is there room for a cell here?”
Surprised, Obama asks, “Why do you need a cell here?”
Alas, the loud cries of “Lock her up” from the crowd outside give it away.
Moving to one side, Trump pulls out his mobile and calls Google’s Sundar Pichai. “Hi Sundar (pronounced ‘sun-der’) this is an executive order. I expect you and your compatriot Satya (pronounced ‘sach-yer’) at Microsoft to put your heads together to retrieve the 33,000 emails ditched by Crooked Hillary. And step on it, or I’ll have you both put on a flight back to Mumbai, along with thousands of other Indian ITs I plan to deport. Ab ki baar, Trump sarkaar!”

Next, showing a huge array of blinking screens behind massive glass doors, Obama explains, “You’ll need to know which buttons to press to launch the deadly missiles against the enemies.”
“No need,” replies Trump. “It’s all clear to me. The blue one’s for the Democrats HQ and the red one for the Republican Party office. I might start with the red one actually, and get rid of the guys there that don’t like me.”
Meanwhile, First Lady Michelle is showing First Lady-elect Melania around the private chambers.
“Why such dark curtains in all the rooms?” asks Melania.
Michelle replies, “When Barack became President, it was like the dawn of light… so much flowed in from all directions, it was overpowering.”
“I will change them all to white, to reflect the current trend,” says the ex-model, whose billionaire husband sees every issue as black and white.
“These rooms are sooo plain,” she laments. “Even the bathrooms at Trump Towers have more flair. Come to think of it, these quarters are too small for us. We have five kids and eight grandkids. Maybe Don can put up a tower with penthouses in the garden… where you put your veggie patch.”
Michelle is speechless.
Meanwhile in the Clintons’ Manhattan apartment, the phone rings. The caller says apologetically, “Sorry Bill, we have to cancel your speaking engagement. Not much response from our members.”
“Shucks, another half a million gone!” someone screams in anger. “This is the third cancellation this morning…!”