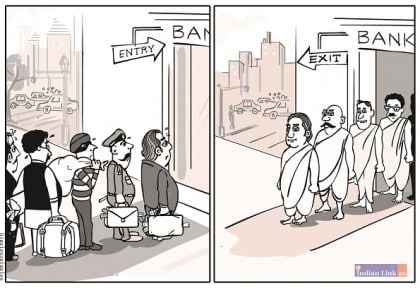 Is the black money currency swap a bane or a boon?

Moving from black to white seems to be the current trend, stretching from the US to India. Whereas in America it is their President, in India’s case it is converting black money to ‘white’.
The surprise national address on 8 November by Prime Minister Modi, announcing that Rs. 500 and Rs. 1000 notes would be no longer be legal tender, came as a thunderbolt. The twin objectives of the shock move are to combat corruption by unearthing billions of black money and to also neutralise fake currency pumped into the country to finance terrorist cells.

Modi’s move has been hailed as a master stroke by many, including economists. Nonetheless, the demonetisation is demonised by a few, mainly opposition political parties, as a ‘Tuglaq-type’ folly.
While the currency swap has created a cash crisis of some sorts, it has also caused a number of comical side shows. Even as millions have patiently waited for hours at bank branches to change their old Mahatma bills for new ones, unsavoury characters have shown how inventive Indians can be.
‘Make America great again’ was the slogan slapped on Trump’s baseball cap. Similar audacious promises are made the world over by every aspiring leader in their quest for power. I can’t recall what Modiji promised before he won in a landslide. It would have been something like ‘Ours will be a land of milk and honey’ or words to that effect. Milk and honey may not have yet flowed, but currency notes are now surely floating along the Ganges. Do the hoarders of ill-gotten wealth expect their sins to be washed away by the holy river?
In Kolkata bundles of half-burnt 500 and 1000 rupee notes have been found. Are some pious Indians following the age-old tradition of making offerings to ‘Agni’ as during major rituals?
The black money busting move received the loudest applause from an unexpected quarter – filmdom, where the colour of the money is mostly black. Big B was thrilled to bits and tweeted, “New Rs 2000 is pink in colour. The Pink effect,” alluding to his recent hit movie Pink. Modi’s harshest critic, Anurag Kashyap, said, “The ballsiest move I have ever seen from a leader.” Most leading stars were star-struck, praising the move sky high.
Some BMWs (black money wallahs) saw a golden opportunity and minutes after the announcement swapped their big bundles for bullion. More than 5.7 tons of yellow metal changed hands within a week. Several others took to devious routes like buying expensive train tickets to far off places and quickly cancelled their ‘unplanned’ journey to collect refunds in legal currencies. A short trip to smart money.
Using the ‘no questions asked for sums under 2.5 lakhs’ loophole, heartless operatives ‘hired’ indigent Indians to act as cash converters to offload their unaccounted money and collect the newly minted notes, paying a pittance to the poor souls.

A couple of leading Chinese experts wrote in the government-owned Global Times that Modi’s daring step could end up as the biggest flop. It could well be their wishful thinking since China sees Modi standing up to it. However, Beijing is closely watching the impact as black money is becoming a problem in Red China too.
Some super-rich Indians are unable to account for their mega moolah and stand to lose millions. They sit in good company with the spy agency of the neighbour – ISI. This agency is believed to pump at least Rs. 500 crore of fake currency across the border every year to finance terrorist outfits. Now, with extra security features embedded in the new currency, those forged notes become worthless causing them considerable loss, at least until new counterfeits matching the latest rupee notes are produced. One can preposterously assume some printing press in Shandong is now furiously working on this to meet the demands of China’s all-weather ally as ‘Pindi or Peshawar presses may lack the precision.
But worse than the foreign adversaries, some devoted locals have been so devious, dragging divine power by dropping bundles of black money in temple hundies. Overnight Rs. 44 lakhs found its way to Jalakandeswar Temple in Vellore, Tamil Nadu. The temple had remained closed for 400 years due to the loss of its main idol after the Mohammaden invasion and only became functional in the mid-1980s when the stolen statue was secretly installed, against the wishes of the Archaeological Survey of India. Another temple in Andhra is now richer by a crore of rupees of the older kind. Will the Government honour them? A god-sent dilemma?
To end on a brighter note, some banks are spraying fragrance on old notes handed in by people to take away their musty smell.
Perhaps we should have called this page Blackchat?