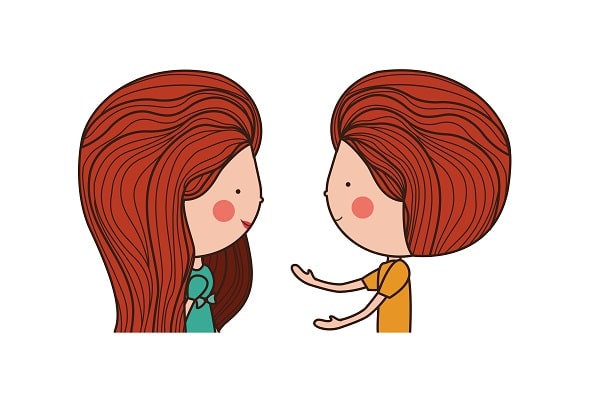 I have a romantic problem that I need your help with please. I am 29 and single. I recently went back to India after 5 years, and Auntyji, something weird happened.

So I met up with my childhood best friend, who is also a friend of the family. Vicky and I have been close friends forever; we just understand each other. Now Auntyji, on this trip, something was different. Granted, I think I went back with a bit of an attitude because I had coloured my hair pink and was mostly looking like a goth reject from the ‘90s, but also because I was having an existential crisis because of my impending milestone birthday.

To cut a long story short, Vicky came to drop me off at the airport. At the airport, as he unloaded my luggage from the car, Vicky gave me a look. Now I’m 29 years old, I know that look – I have seen it before many times. But he didn’t say anything, Auntyji. Yet our eyes met and something happened.  I was so surprised that I turned away and pretended nothing had happened – but I knew I was blushing because my face had turned hot. If he noticed, I was hoping that he thought it was simply my pink hair that was reflecting on my sunhera chehra.

But Auntyji, now that I’m back in Sydney, and Vicky and I are back to exchanging friendly emails and texts, I’m wondering what to do about that look. His texts and emails are the same – but Auntyji, oh that look! The only thing that was missing was a Bollywood number playing in the background and rain falling slowly on us. Should I say something? What could I say? Or should I let it drop?

I have to admit to you, dear Auntyji, that getting together with Vicky would not be such a bad thing – because now that I have thought about it, he is super smart, very good looking, so sweet and kind – and that look mein kaafi garmi thi. What do I do, Auntyji?

Aay haay, kya baat hai, meri gulabo sundari! Meri badami barfi! What a romantic story you have told me – you have gotten me so excited that I just had to go and read a Harlequin romance just to get my satisfaction.

Now, here is the start of your prem kahani. Your hero, your jigri dost, your bachpan ka saathi, the one who knows you better than any other friend, and who happens to be gorgeous, smart, kind and sweet, gave you a look. How lucky you are, you zaalima! How you didn’t return the look straightaway and decide to spend another week in India and the flight to Sydney be damned, is beyond me.

So, all of us want to have as a partner someone who is our best friend, first and foremost. It seems you already have this. And then, the icing on the cake is that he started proceedings with a look. So my dear sharmilee, the ball is in your court. Yes, you have to say something. At least give it a red hot Aussie, that’s the least you can do. So the next time he posts a picture of himself on MyFace or whatever social media you kids use nowadays, you can post a complimentary comment. Say you wish you were there. Say something that invites interest. And for god’s sake, don’t be cryptic – because being mysterious got no one anywhere fast.

So yes, you have my blessing to proceed with haste. And if you really don’t know what to say to start this prem katha, then how about this line: “I want you to look at me again like you did that day”. Don’t forget to invite me to your shaadi, nah  – I’ll be in Delhi in September.