Auntyji: helpful neighbours and heading over the hill 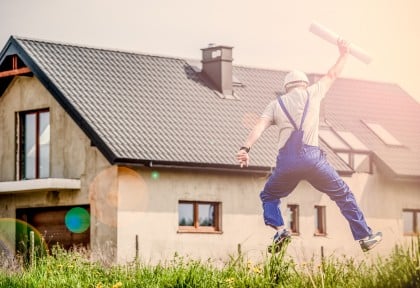 Dear Auntyji,
I am really hoping for your advice because I find myself in a weird situation. We have the best neighbours – they are friendly, helpful, fun and never intrusive. We have known them for two years now. Dave is a stay-at-home dad and loves doing DIY stuff, and he is really, really good at it.
So, we went to Darwin for two weeks, and when we returned, we noticed that all the DIY around the house had been done! Dave had used his keys to get inside the house -with our previous permission – and had resealed the grout in the bathroom, fixed cracks in the ceiling, cleaned out the plumbing and left the house pristine. Now Auntyji, I was absolutely delighted by this turn of events, but my poor husband felt emasculated. He said it should have been his role to do these jobs, but the reality is that Mohit has not done any of these necessary tasks since we moved in! When we spoke to Dave, I was most appreciative of it, but Mohit says it was weird for Dave to come into our house and fix stuff while we were away. Because I really like Dave and Tina, I have no issues. But what do you think Auntyji, is this odd? And what should Mohit do about this – even though I don’t want him to do anything. Thoughts please?

Auntyji says
Can I have the name of this wonderful neighbour so that I can move next to him please? Dave sounds like an ideal mate – he lets himself in, fixes up stuff and leaves the house in pristine condition. Now I understand that poor Mohit feels like a bekaroo, but he brought this on himself. If he had completed these jobs, Dave wouldn’t have needed to do this in the first place. So I suggest you have a chat with your bekaroo pati dev, and tell him that this is the result of his laziness. Tell him he should be grateful to have a padosi like Dave.
Also, I think you might need to ponder why Mohit feels this way. Perhaps he is not as concerned about the work done as he is about the fact that there is another man happy and willing to step in where his own deficiencies take shape. So, tell him to either lift his game, or accept the fact that there is another man willing to do what he won’t. As long as Dave does not try on your lingerie while you are at work, I suggest you let this go. Mohit will get over it. But, keep in mind that everything starts off innocent. Who knows what Dave gets up to while he is home alone. Nothing that a motion-activated recorder won’t capture…

Dear Auntyji,
My husband is shortly turning 40. Now, he says he loves his life, but he hates his job, hasn’t given up bad habits like smoking and drinking and is often lazy. He has been trying to change jobs for a while, but nothing has happened. He has tried to give up cigarettes, but that is an ongoing saga. All in all, he is not happy to be turning 40. His best friend Akash, on the other hand, is not married, but has the best career and a good life. Akash is also turning 40 in the same month, and has decided to have a party. My husband thinks it’s a good idea to have a party together. As I see it, there is nothing to celebrate: hubby is getting older, fatter, unhealthier, with fewer options to change his career. What’s there to celebrate? Why the party? Fortunately, I have not said anything to hubby, but these are my thoughts. I love my husband dearly, but why all the celebration, Auntyji? Why waste all this good money on a party when he does not have his life in order. Do you think I am being a little harsh? I would love to hear your thoughts.

Auntyji says
Wow. You are a hard wife. Your bechara, budda husband is not looking forward to turning chalis, and the only thing that he has to help him get over the misery of entering his 50th decade is this party, and you want to deny him this. If you say you love him, let him have his party-sharty nah, tumhara kya jaata hai? Granted, you didn’t win the lottery of life by ending up with a lazy smoker alcoholic with no career prospects, but ab kya karenge, bahut der ho chuki nah.
I say you let him have his party and be happy for him. Turning 40 is a major milestone and you should be grateful he made it this far. Who’s to know what will happen by his 50th? You should totally organise this party and make it the best party ever, ya?