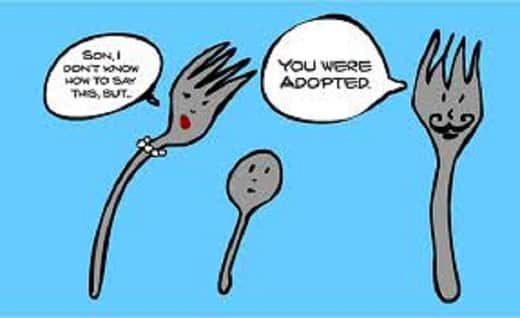 Reading Time: 4 minutesMind your own business!

I have been seeing this really nice boy for six months. About a month ago, I overhead his mother and aunt refer to him as adopted. I was shocked and amazed, but secretly I was not surprised because Ricky doesn’t look anything like his family members. So Ricky does not know this because I tried to ask him in a number of ways whether he was adopted but he very proudly told me he was his father and mother’s dulara. Yes, I know you’re probably wondering who uses that word anymore, but he picked it up from a movie we were watching called Anmol Rishta or something. So it turns out his Rishta with his parents are not so Anmol after all. I am thinking that in six weeks time, at a family gathering, I will ask Ricky’s mum about this and have her tell him to his face that he is not adopted and is her real son. I want to fully expose her for the liar she is. So, I thought I would ask for your feedback on this first, I don’t want Ricky to hate me after this, but I am doing him a favour. Please let me know your thoughts Auntyji?

My goodness, how old are you? Five? Seven? 17? You couldn’t possibly be older than this because your total lack of common sense and empathy is indicative of a stupid bacchi, rather than a grown woman. Here is what is wrong with your nasamaj planning, you stupid kalaankani. How do you really know what Ricky’s mum and aunt were speaking about? Were you part of the conversation? How do you know they weren’t speaking about Ricky on Days on our Lives, because you do know that he was adopted right? Just after Bo and Hope got married. Wait, I am confusing myself there. In any case, your first mistake was to leap headlong into a conclusion with no basis. In doing that, it looks like you have yourself a concussion because your second mistake was to think, you horrid little besharam ladki that you can interfere in the lives of others. You have no right whatsoever to start making allegations about anything, and that too at a public forum. I mean, seriously, what were you thinking? All this is really none of your business and I would let sleeping dogs lie. Until you are told information first hand, you shouldn’t do anything with this. And second, it’s not your place to be the local grapevine. Having said all this, I’m beginning to think that Ricky deserves better than a churail like you, so by all means, go ahead with your plan. You will make it obvious to all that you don’t deserve to be in that family then you can go and find some other family to torment. Man, you really have been watching too much Zee TV. Honestly, don’t you have better things to do than to live a Zee TV serial of your own? And is your serial called, A busybody ki kahaani or ek nadaan, pagal si ladki.

On Facebook, my ex keeps posting pictures and comments about how much fun she is having with her new man, and she makes pointed references to how crap I was. Each time she posts something, something inside of me dies. I don’t want her back, but I wish she wouldn’t write such crazy stuff, you know what I mean? What should I do Auntyji? I have not done the full tit-for-tat kind of thing, but man, I am so tempted. I wish I could just find myself a supermodel and post pictures on Facebook with pithy comments about how fabulous my life is. Do you have some honest candid advice for me Auntyji? You know I really value what you have to say.

Ah, yes, Facebook, the place where friendships go to die and where people’s spirits are slowly crushed. I have one very simple piece of advice for you. But first, I have a question. What the fudge are you doing on Facebook anyway? Why are you on there vicariously living everyone else’s meaningless and dull life? The only useful thing Facebook is good for is to help keep your self esteem down, where this one is getting promoted and that one is eating a fantastic meal and the other is living a lovey-dovey life with his or her otherwise really boring other half. So, unless you are going to say that you use Facebook to gather insights into human behaviour in order to predict the next big trend, I don’t see any reason for you to be on Facebook. Who cares what your friends are up to. I mean, do you really care that Amrita from grade 6 is now married and living in Denver with two ugly, but intelligent kids who get trophies for winning spelling contests? Do you really want to see narcissistic Ankhit posting picture after boring picture of his lovely-in-his eyes new wife Shila? And do you really, really care that Madhu ate aloo Sabzi for breakfast? Seriously, do you really want to know all this? No, you should want to know more important things in life, such as, how to eradicate poverty or malaria and how a pan Africa will help solve all of that sub continents problems and what is Modi’s five year strategy? So my advice is for you to get off Facebook, then you won’t have to care what your ex does with whom. Remember she is playing to an audience of one. Why give her the satisfaction? Obviously you did not give her satisfaction when you were together, but she is getting her satisfaction now. Oh, I do hope this delicious irony is not lost on you! In any case, get off Facebook, and live your own life. That’s my candid advice to you. Now take it and go. Live your life. But not on Facebook for Vishnu’s sake.