An event of mythic proportions 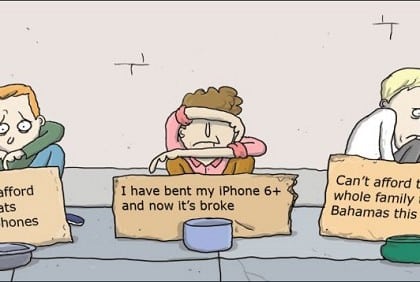 NURY VITTACHI on the importance of perspective

My children: “We’ll only eat it if it’s Haagen-Dazs.” Me: “When I was a child I lived on dirt until I was eight and I was deeply grateful.”
Today’s youngsters have no idea how lucky they are. Luckily, they receive fascinating lectures on the subject from parents like me.
“We evolved from apes and fought in two World Wars to give you the freedom to watch 20 episodes of Teen Wolf back-to-back,” I said, the “we” in that sentence referring to the Adult Species in general, not me specifically.

The next day I was at my Hong Kong office complaining about the young generation when a visitor from India told me that her country had suddenly gone back in time.
“Imagine going back to being an all-cash society, and then a wizard appears and waves a magic wand, causing all the money in the land to disappear,” she said. “What would you do?”
The obvious answer would be for breadwinners to move to a barter economy, although I don’t suppose my wife would get much for a set of three extremely spoiled children and a writer husband.
But before I could say anything, she launched into an eyewitness account of The Great Disappearing, an astonishing event (officially called the demonetisation of 2016) when around 84 per cent of Indian banknotes lost all value, banks shut and ATMs stopped working.
“Well, I don’t remember when I last saw an actual banknote,” I told her, although that’s probably something to do with the fact that my wife controls the money in our household, severely limiting access to it by her “five helpless dependents” – three children + dog + husband.
The Indian visitor told me that the move by the government to flush out hidden cash reserves had numerous unexpected repercussions. Folk holding cash turned out to be a much more varied group than expected, and many were women.

Receptionists and secretaries ended up consulting the accountants for whom they worked, sometimes successfully. “Hide my stash, sir, or I may have to share what I know about your egregious personal habits to the authorities, compliance officers and your wife.”
Some say the Indian plan should be tried in other places where folk don’t pay tax. You only have to spend five minutes in Brazil, Italy, Greece and Russia to notice that the “unemployed” people all wear Prada and drive Lambos, while working middle-class folk dress in rags and live off cappuccino dregs. Or perhaps we should go for China’s simple way of discouraging tax dodgers. They execute them.
Anyway, the conversation made me happy that I used electronic money instead of physical money – but a few days later I saw the blockbuster movie Pacific Rim, in which the evil monster uses an electromagnetic pulse to destroy all electricity in Asia.
I told the kids that they would be wise to occasionally skip the Haagen-Dazs and practise eating dirt from time to time.
“It’s not that bad once you get used to it, especially if it’s properly seasoned, and presented Masterchef-style, with a smear of raspberry coulis.”
They glared silently at me, unsure of whether I was joking or not. That’s pretty much how I spend my whole life.